Israelis are frustrated by the fact that their nation has one of the highest COVID-19 vaccination rates (over 60 percent are fully vaccinated, and 25 percent have already had a booster), and yet is also leading the world in daily rate of new infections.

Israel has been logging over 10,000 new infections daily this week, with a positive test rate of around 7%. Many countries no longer consider Israel to be “green” on the COVID scale. By comparison, the United States has been registering about half the number of new daily infections per capita (around 900 per million citizens for Israel, just 450 per million for the US).

A new study suggests that Israel’s high vaccination rate could be at least partially to blame for the current spike in coronavirus infections.

The study was carried out last month by Israel’s Maccabi Healthcare Services (one of the local HMOs), and the results were featured in the leading scientific journals Science and Nature. (See: Why is Israel Still Giving COVID Boosters if the WHO Said to Stop?) But it only garnered serious attention here at home this week, when veteran Israeli journalist and Channel 13 News anchor Oshrat Kotler expressed her disapproval over the findings not being widely reported in Israel.

“How sad that I had to read about this important Israeli research on an American news site,” Kotler wrote on Facebook. The journalist added that she had contacted Maccabi and confirmed the veracity of the headline she had read, which asserted, based on the Maccabi study, that “vaccinated individuals are 13 times more likely to be infected by the Delta variant than those with natural antibodies.”

Indeed, the majority of the nearly 700 Israelis currently hospitalized due to COVID-19 are fully vaccinated against that virus, and vaccinated individuals make up a large percentage, if not a majority of those testing positive every day. 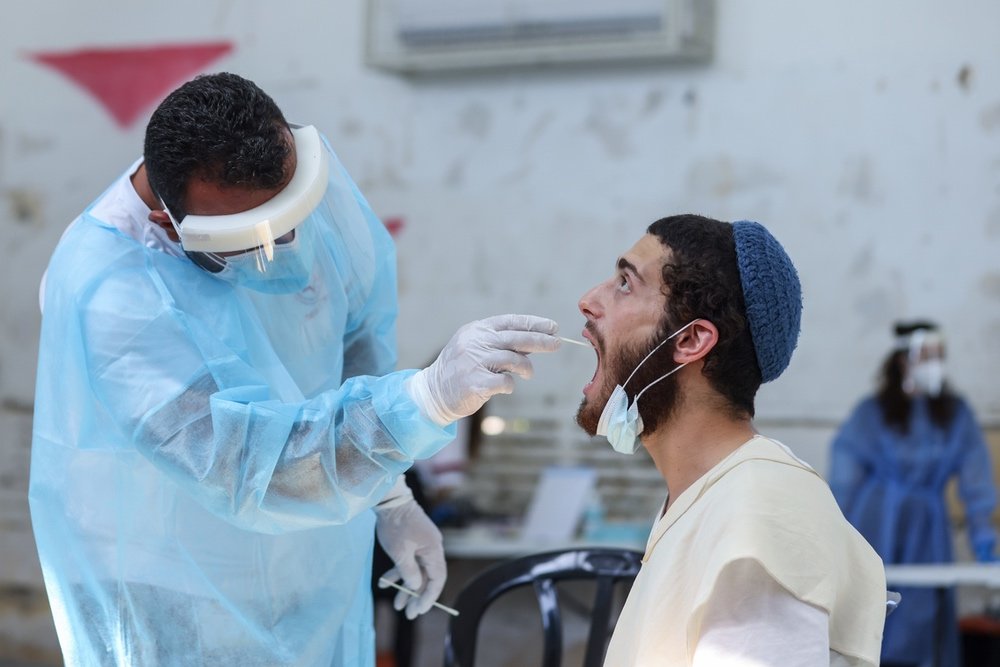 Israel currently has one of the highest rolling averages of new daily infections in the world. Photo: David Cohen/Flash90

In other words, the “vaccine” is not preventing either infection or transmission, though in Israel it did lower those numbers.

It must also be noted that the authors of the Science and Nature articles and most of the experts they cited did encourage inoculation given that the shots produced by Pfizer, Moderna and others are highly effective in preventing serious illness. Just not as effective as naturally-produced antibodies that come from being infected. This is especially true as the virus mutates.

An Israeli scientist who spoke with Nature stated that while the evidence wasn’t yet there to mandate a booster shot, there was no real risk in taking the vaccine. If the vaccinated are anyway being infected as the virus mutates, they’ll end up with naturally-produced antibodies, too.

Still, the present debate raises the question of whether or not Israel and other nations are being too aggressive in trying to control a virus that nearly all experts agree isn’t going away no matter how many booster shots we receive. If our own bodies’ immune systems are more effective in protecting us against COVID-19, why not let them do their job?

Again, even those leaning toward that line of thinking aren’t saying the vaccine shouldn’t be used. There are sectors of society that are at greater risk of serious illness and complications, and they should be inoculated. At the same time, many are arguing, and Kotler now seems to be among them, that the majority of the population should get on with life, let the virus run its course, and before long a natural “herd immunity” will develop.

“The only conclusion that can be drawn from this study is that we [Israel] need to reevaluate our course of action,” wrote Kotler. “My own conclusion is that if we don’t belong to one of the at-risk sectors of the population, then we should be very careful about this problematic vaccine.”

Kotler stressed firmly that she is not an anti-vaxxer, but insisted that when it comes to the COVID vaccine, the public “has been deceived.”

Of course, the policy she’s now championing is one no politician can adopt so long as Kotler’s colleagues in the mainstream media are hyping COVID-19 as the greatest threat to mankind.

UPDATE: Kotler’s post has sparked a media firestorm in Israel, prompting the Ministry of Health to respond with the following statement:

There is a fundamentally incorrect analysis of the Maccabi study spreading on the internet. It is important for us to clarify to the public – the risk of an unvaccinated person getting Corona is 20 times greater than that of a vaccinated person!

Some are making the mistake of thinking the vaccine is dangerous based on a distorted interpretation of the data presented that makes an illogical comparison between death rates among those who recovered and those who were vaccinated. This is not the proper comparison. The purpose of the vaccine is to prevent serious illness, and it is very effective at doing this.

Corona is a serious disease that can kill, and even recovering patients have long-term symptoms such as fatigue, weakness, decreased concentration, cognitive disorders and more. It is best to read the study in depth and not rely on misleading headlines and interpretations. The unequivocal recommendation of all health bodies in Israel and around the world is to get vaccinated.