After five years of research and intensive work by the best archaeologists of the Israel Antiquities Authority and experts from the Israel Nature and Parks Authority, as well as an investment of more than NIS 150 million by the Edmond de Rothschild Foundation, a new Visitor’s Center was inaugurated at the Caesarea National Park last night.

Israel President Reuven Rivlin and Baroness Ariane de Rothschild were present at the ribbon-cutting ceremony for the monumental restoration project of the Harbor Vaults Visitor’s Center at the Caesarea National Park that brings the audience face-to-face with the daring, complex and conflicted figure of Herod-presented as never before.

The exhibition halls within the heart of the 7-meters-tall (23 feet) vaults include a variety of exhibits and a trove of archaeological treasures hidden for over 2,000 years in the land of Israel.

At the center of the exhibition is a screening of an internationally-produced historical epic about the very complex figure of King Herod. The lavish production brings to life the vision, intrigues, desires, passions, murders and dreams that Herod experienced, right here-in the heart of Caesarea’s antiquities. 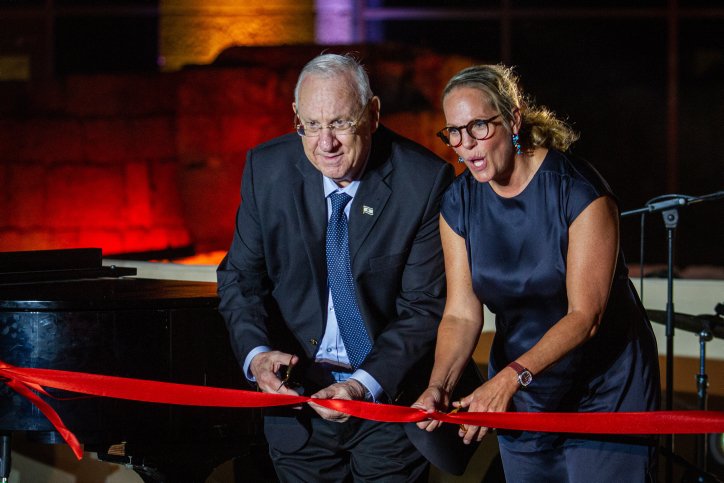 Israeli President Reuven Rivlin and Baroness Ariane de Rothschild cutting the ribbon during a launching event of the Caesarea Visitors Center, in Caesarea, on May 29, 2019. Photo by Flash90

Caesarea Harbor and its antiquities is one of the most popular tourist sites in Israel. Last year, close to one million visitors came to visit the Roman amphitheater, tour the promenade with its fortifications and watchtowers, admire the ancient synagogue that attests to Jewish life in the city, walk among the remains of the palace and temples and marvel at the aqueduct. During holidays and breaks, horse racing shows and performances are held in the ancient hippodrome preserved on the site. In between, you can spend time in the artists’ square, the cafes and the variety of enticing restaurants, all overlooking the open sea.

The new visitors’ center will open to the public on June 1st and is accessible to visitors with special needs. Entrance to the center is free of charge for National Park ticket holders (NIS 39 per adult or about $10, NIS 24 per child or about $6 and free of charge for Israel Nature and Parks Pass Members).