Iraq on Thursday passed a new law criminalizing the normalization of relations with Israel, ostensibly ending any hope that it would eventually sign on to the Abraham Accords.

Those violating the law could face the death penalty or life in prison.

It was passed by an overwhelming majority of 275 lawmakers out of Iraq’s 329-seat parliament. See the full translated text of the legislation below.

What does the law mean practically for average Iraqis? On the surface, it would seem to prohibit political or diplomatic moves toward Israel. But a source in Iraq tells Israel Today that it is very much aimed at preventing average Iraqis, the “Iraqi street,” if you will, from developing greater affinity for the Jewish state amid the atmosphere created by the Abraham Accords.

“The new law criminalizes any type of interaction with the Israeli state or Israeli people on all levels,” says Ali Abbas, who runs the Virtual Embassy of Iraq in Israel, an activist project that seeks to foster warmer relations between Iraq and Israel, and which is no doubt now illegal under the new law.

“We are afraid that the new law is specifically made to justify death penalties,” he continues. “It even punishes by death anyone who communicates with any Israeli on social media, email or any other method of communication.”

Islamists in parliament hailed the law’s approval as a “great achievement” and a “true reflection of the will of the people.” But Abbas explains that it is a gross violation of the “freedom of expression sanctioned by the Iraqi constitution,” and will be used to intimidate people and eliminate political opponents.

He also previously reported to Israel Today that there are millions of Iraqis who love Israel, signaling that contrary to what the Islamists say, this new law does not reflect the true will of the Iraqi people.

It was just last year that hope of peace between Iraq and Israel peaked when 300 prominent Iraqis attended a conference in Erbil that called for normalization with the Jewish state.

The gathered tribal leaders, government officials and other leading citizens pointed to the benefits the Abraham Accords had afforded countries like the United Arab Emirates and Bahrain, and stressed that Iraq was in dire need of moving beyond its conflict-ridden past.

The central government in Baghdad was furious and sought to arrest those involved in the conference.

See: Arrest Warrants Issued for Iraqis Who Called for Peace With Israel

While Abbas and other peace activists were greatly encouraged by the Erbil event, he warned at the time that it would be exploited by Islamists in the upcoming national election. And so it was.

The political party of radical Shiite cleric Muqtada al-Sadr as predicted became the largest party in parliament after successfully claiming that “Zionist agents” were already active in the country, and was behind the draconian new law passed this week. 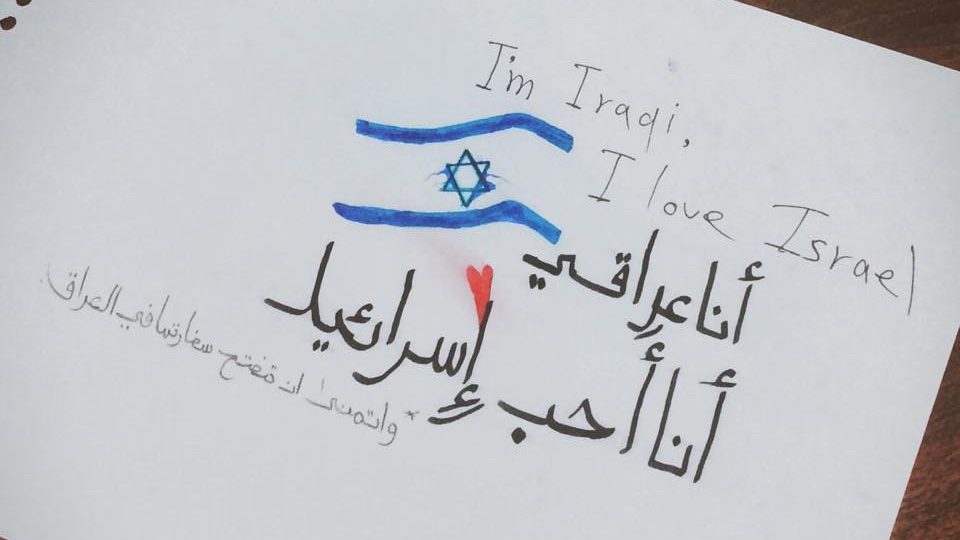 Under the new law, messages of support like this could land an Iraqi in prison, or worse.

The US State Department on Thursday issued a statement decrying the new Iraqi law:

“The United States is deeply disturbed by the Iraqi Parliament’s passage of legislation that criminalizes normalization of relations with Israel.

“In addition to jeopardizing freedom of expression and promoting an environment of antisemitism, this legislation stands in stark contrast to progress Iraq’s neighbors have made by building bridges and normalizing relations with Israel, creating new opportunities for people throughout the region.”

This law aims to achieve the following:

The provisions of this law apply to:

It is forbidden to normalize and establish diplomatic, political, military, economic, cultural, or any other relationship with the Zionist entity.

Normalization and establishing relations include one of the following actions:

Confiscation of publications and literature that promote normalization with the Zionist entity.

The perpetrator of one of the crimes mentioned in Article 4 does not benefit from the excuses and mitigating circumstances mentioned in the amended Penal Code No. 111 of 1969 or any other law that replaces it.

No provision that contradicts the provisions of this law shall be applied.

This law shall be implemented from the date of its enactment in Parliament and its publication in the Official Gazette.

In order to preserve the national, Islamic and humanitarian principles in Iraq, and prevent the great danger that ensues from normalization with the Zionist entity, promoting, communicating, or establishing relations with this entity, in addition to blocking the road for anyone who wants to establish any kind of relations with the Zionist entity. This law is to put a deterrent punishment and to preserve the unity among the people and to keep their national and Islamic identity.