Photo: Synagogues and cars were set on fire and shops were devastated in the Israeli city of Lod.

The Hamas rocket attacks over the past three days have been unprecedented in many ways. But of even greater concern to most Israelis is the hostility and violence it has awoken in parts of the Israeli Arab Muslim community, which has in turn elicited violence from some hardline Jews.

Muslim rioters continued their rampage in cities throughout Israel on Wednesday night, attacking Jews and Jewish property, and the continued pogroms have led to similar acts by Jewish hooligans.

Among the wounded was a pregnant Jewish woman in the central city of Lod, near Ben Gurion Airport. Doctors succeeded in delivering her baby, but the mother remains in serious condition after being beaten by Muslim rioters.

In Acco, a 37-year-old local school teacher was pummeled nearly to death. It was later revealed that he had gone out to make sure none of his students were getting involved in the brawls, when he himself was set upon by violent Muslim youth. He remains in critical condition.

A Jewish motorist who accidentally entered the Arab town of Tamra was viciously attacked and nearly killed before a more sensible local Arab man intervened and saved his life.

And, not to forget, just two nights ago Muslims burned to the ground synagogues and torched Jewish holy texts in Lod. 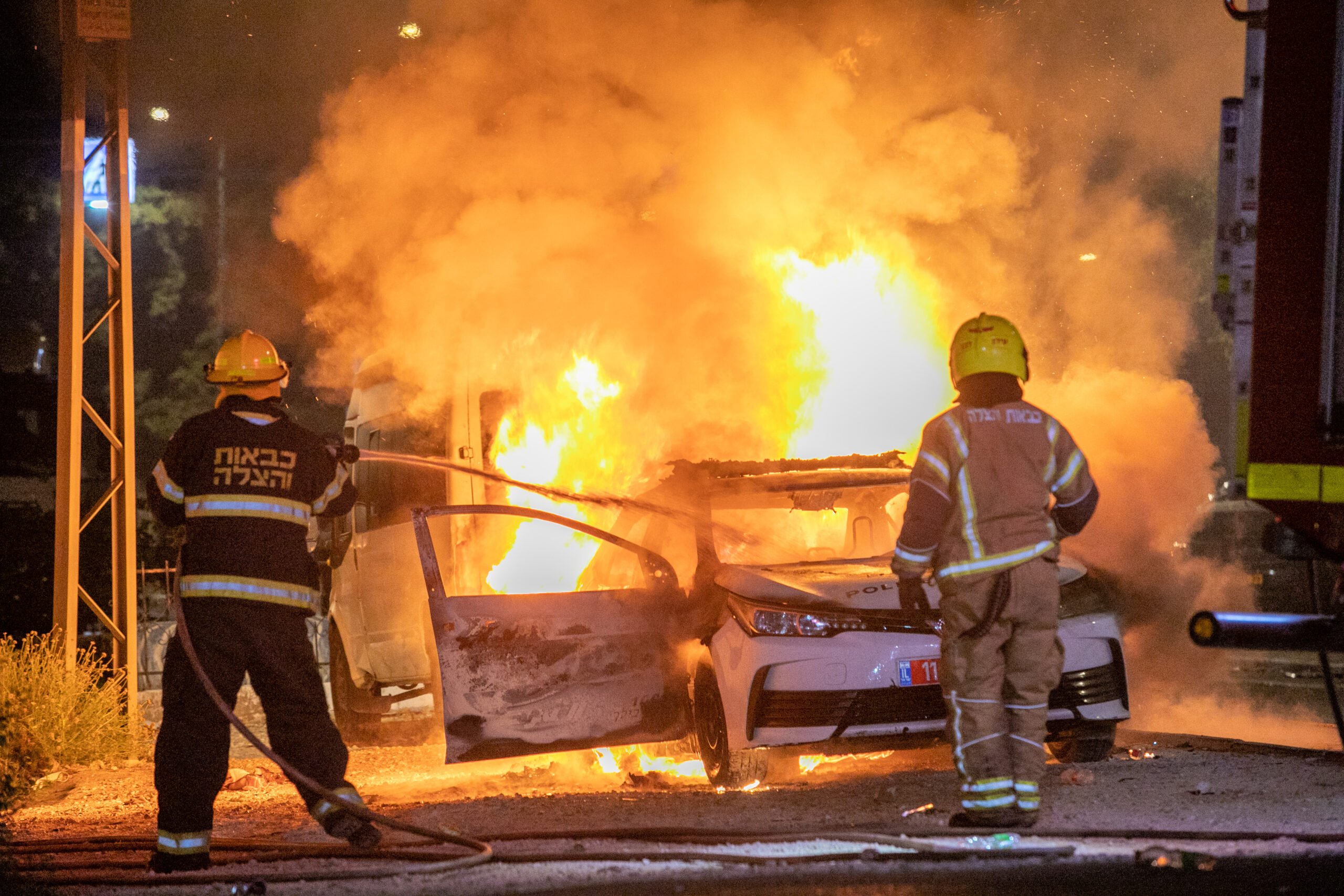 The Arab rioters in the city also ravaged Jewish property and set a police car on fire.

Responding to these pogroms, Jewish hooligans marched through cities in which the riots took place and clashed with Arabs.

There were a number of clashes between the Jewish and Muslim mobs, though no reports of any serious injuries.

The one severe incident connected to the Jewish response occurred in the Tel Aviv suburb of Bat Yam, where violent Jewish extremists pulled an Arab driver from his vehicle and mercilessly beat him. The entire thing was filmed and played ad nauseam on both local Israeli and international media.

A number of Jews involved in the attack have since been arrested.

Israelis are decrying what appears to be a total lack of control across the country, either as a result of political indecision, or progressive policies that prevent the police and security forces from more forcefully intervening.

In Lod, despite the government’s announcement of a state of emergency and a curfew, and despite the streaming of further forces, the police were unable to gain control of the city and the Muslim rioting continued.

Two Arab suspects, residents of Lod in their 20s, were arrested for carrying out a number of shooting attacks on police officers during disturbances that took place Tuesday night in the city.

The police arrested 36 Arabs during the violent riots that took place in Jisr a-Zarqa, Hadera and Wadi Ara. The Arabs were arrested after throwing stones, launching fireworks, burning trash cans and tires and attacking police officers.

In Umm al-Fahm, shots were fired at police officers, wounding one of them moderately.

A 65-year-old woman was attacked by Arabs in Acco who tried to lynch her and the taxi driver who was driving her. Eyewitnesses said police fled the scene.

The Arab rioters in the city also vandalized Jewish property and set fire to a police car. Infrastructure at a train station was damaged and the train service was shut down in the city. 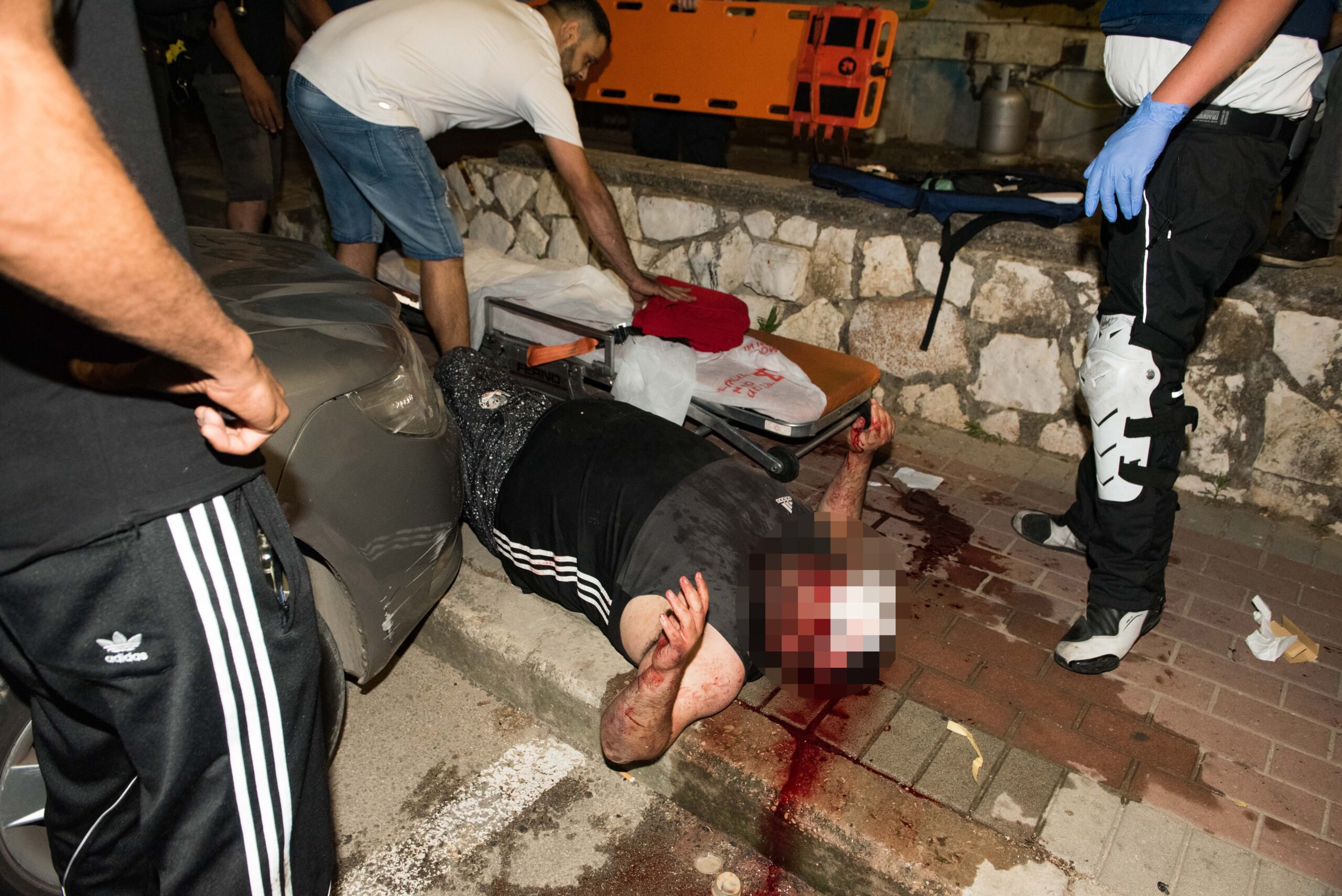 An injured man in clashes between Arabs and Jews in Akko

The prime minister said he intends to deploy military forces according to the existing law and will introduce an additional law if necessary.

Sephardi Chief Rabbi Yitzhak Yosef condemned the Jewish lynch mobs and said that “innocent Israeli citizens are being attacked by terrorist organizations, the blood is indeed hot and our hearts are outraged; the scenes are difficult to watch. However, we must not be dragged into provocations and to hurting people or harming property.”

“According to the Torah, there is no permission to take the law into one’s hands and act violently. The work of restoring order must be left to the police. We must be a light unto the nations, and not, God forbid, the opposite,” he insisted.

By contrast, the vast majority of the Arab leadership has remained silent.

With reporting by TPS