Traditionally, the eyes of the Christian world are focused on the birthplace of Jesus Christ at Christmas. There, in Bethlehem, the Messiah was born in a manger. And there, in Bethlehem, locals have been celebrating this event for millennia. But what is often not reported is that fewer and fewer Christians are taking part in the celebrations with each passing year.

It is well known that Christianity is the most persecuted religion in the world. Israel Today has been reporting on the situation of Christians in the Palestinian-controlled territories for years. Since the Oslo Accords, the Palestinian Christian population has deteriorated to an alarming extent. In 1993, Bethlehem’s population was over 80 percent Christians. In 2019, it is only about 20 percent. Most of Bethlehem’s Christian residents have moved away, been bullied or threatened. The lower birth rate among Christians also plays a role.

A Christian resident of Bethlehem recently spoke to the TPS news agency and reported on what life there really looks like for Palestinian Christians. In the above video, he confirms that the number of Christians has dropped dramatically since 1994, when the Palestinian Authority (PA) came to power in and around Bethlehem. He says this was a deliberate policy of cleansing by the PA. And he can substantiate this allegation: During the so-called Second Intifada, the PA received considerable monetary support from Qatar and other rich Gulf states. The PA used this money to buy houses and lands from Christians in and around Bethlehem. Many buildings with Christian features (such as crosses or engraved Bible verses) were razed so as to remove evidence of a Christian presence. Many of these houses were hundreds of years old.

It defies reason that an anti-Christian policy like this is possible in the birthplace of Jesus. According to a local law, the mayor and vice-mayor of Bethlehem must be Christians. This law was introduced to protect the interests of Christians in this historic place.

But the reality is very different. The Christian from Bethlehem reports on the plaza in front of the Church of the Nativity, which belongs to the Orthodox Church. The PA has been trying for some time to gain complete control of this place. The Palestinian leadership worked with Christian clergymen like Ibrahim Faltas, the highest-ranking Franciscan in the area, claims the Christian whistleblower, whose face has been hidden for his own protection. Faltas, an Egyptian, has maintained excellent relations with the PA since the “Siege of the Church of the Nativity” in 2002. At that time, 40 terrorists barricaded themselves inside the church. The situation was resolved after 39 days through negotiations conducted by Faltas and today’s Mayor of Bethlehem, Anton Salman. Faltas and Salman, who is also Christian, continue to work closely with the PA to this day. One of the aims of this cooperation is to alleviate the status quo that has existed for 200 years.

Ninety percent of the famous plaza in front of the Church of the Nativity is owned by large Christian institutions, including the Greek Orthodox Church and the Armenian Orthodox Church. The Catholic Church owns shares in the Church of the Nativity. But these Christians are only allowed to use the plaza at Christmas time. And even then, the festive lights, Christmas trees and decorations have long since ceased to serve as a backdrop to joyful celebration of the Messiah’s birth. Today’s Christmas celebrations in Bethlehem have deteriorated into stage for Palestinian nationalist propaganda, reports the local Christian.

When the Christmas tree is lit and the bands begin to play, no more than 20 Christian families will be found among the 10,000 people who have gathered at Bethlehem’s Manger Square. And they came from all over the Palestinian territories, the man in the video says. The Christians have been weakened, they are becoming fewer and fewer, he warns: “We call on the entire Christian world and the State of Israel to support the Christians in Bethlehem!”

Local Christians there are urging the world to again take notice of them and their plight, and to take to task the Palestinian Authority over its clear goal to expropriate and ultimately expel the local Christians. 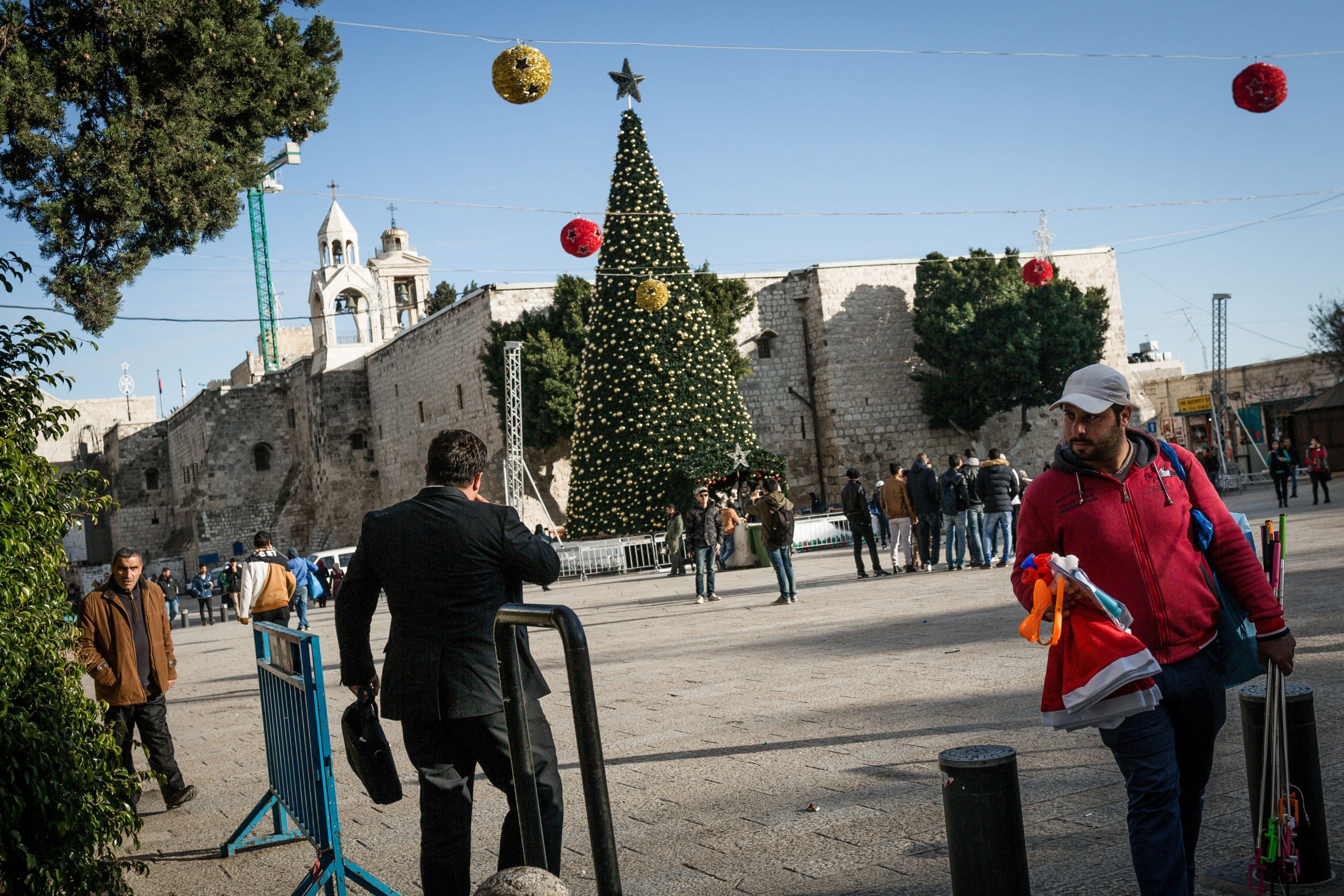