Hamas and Palestinian Islamic Jihad, two Gaza-based terror groups, closed an alliance at the beginning of last week to step up terror attacks in Judea, Samaria and Jerusalem. The commanders of the Hamas and PIJ military branches met last Sunday to discuss intensifying cooperation between the two terrorist groups.

In recent weeks, Israeli security forces have already seen a significant increase in the number of terrorist attacks in the foretold areas.

Initially, these attacks were limited to stabbings and the throwing of Molotov cocktails, but on Thursday, December 16, a Jewish Israeli was shot dead in northern Samaria, and on Wednesday last week, a Palestinian terrorist tried to run over a group of Israeli soldiers with his car. There have been more shooting attacks, one of them against a base of the Israeli army near the city of Nablus in Samaria.

According to the Shin Bet, Israel’s internal intelligence service, Israel suffered 155 terrorist attacks in October and 142 in November.

The murder of Yehuda Dimentman

Yehuda Dimentman, the Jewish Israeli who was murdered on December 16, came from the yeshiva (Torah education institute) in the expelled village of Homesh in Samaria that was vacated by the Sharon government in 2005.

The car in which Dimentman was traveling as a passenger was shot at by Palestinian terrorists when it left Homesh.

The yeshiva student was hit in the throat and later died, while two other passengers suffered minor injuries.

The driver remained uninjured and managed to drive his car to the nearby village of Shavei Shomron despite the fact that the tires of the car were shot to bits.

The security agency Shin Bet used a hitherto unknown new technology to quickly track down the perpetrators of the attack.

On Sunday, four Palestinian Arabs involved in the attack on Dimentman and his fellow students were already arrested in the Palestinian village of Silat al-Harithya as a result of this new intelligence-gathering technology.

The weapons used in the attack were also found during the operation in Silat al-Harithya. It concerned two M-16 automatic rifles stolen from the Israeli army (IDF) and a homemade Carlo rifle.

Israel Prime Minister Naftali Bennett followed the night-time operation at the Shin Bet headquarters, and later said that every terrorist should know that he lived on borrowed time and would be caught eventually. 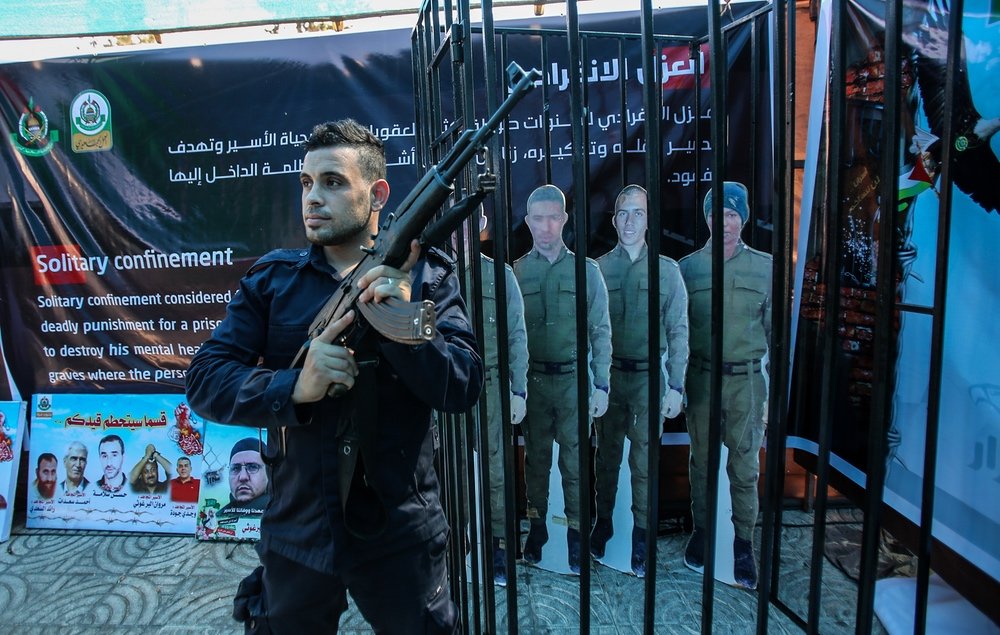 A Hamas gunman stands guard over a phony prison holding cut-outs of Israeli prisoners during a demonstration put on by the terror group. Photo: Atia Mohammed/Flash90

After the deadly attack near Homesh, the number of terrorist attacks further increased.

On Monday last week, for example, IDF soldiers who mapped the homes of the arrested terrorists in Silat al-Harithya before the buildings will be blown up were shot at. The destruction of the homes of terrorists is standard practice in Israel after deadly terror attacks and serves as a deterrent.

Also last Monday, the IDF arrested two terrorists who were trying to cross the border into Israel from Gaza armed with knives and grenades.

It has been extremely tense and volatile in Jerusalem for a few months now with numerous terrorist attacks.

New attacks are reported almost daily, especially in the vicinity of the Damascus Gate in the Old City of Jerusalem.

So far in the past three weeks, 25 attacks involving rocks and boulders have been reported in the Hizma area of Jerusalem, for example.

This included at least five attacks on Israeli buses. The drivers of these buses were lightly injured in the attacks.

Hamas and PIJ praised the increase in the number of terrorist attacks against “the occupation army and settler terrorism.” The latter was a reference to an act of revenge after the murder of Dimentman.

After the murder of Dimentman, a group of Jewish Israelis attacked a Palestinian couple in the village of Qaryoot near the town of Nablus in Samaria, injuring the man, who broke four ribs.

Later, a similar attack was carried out in the neighboring village of Burqa, but was interrupted by IDF soldiers.

Tensions between Jews and Arabs in Jerusalem, Judea and Samaria have increased significantly in recent weeks due to ongoing Palestinian violence.

Jews in these areas feel increasingly unsafe and some are taking the law into their own hands. 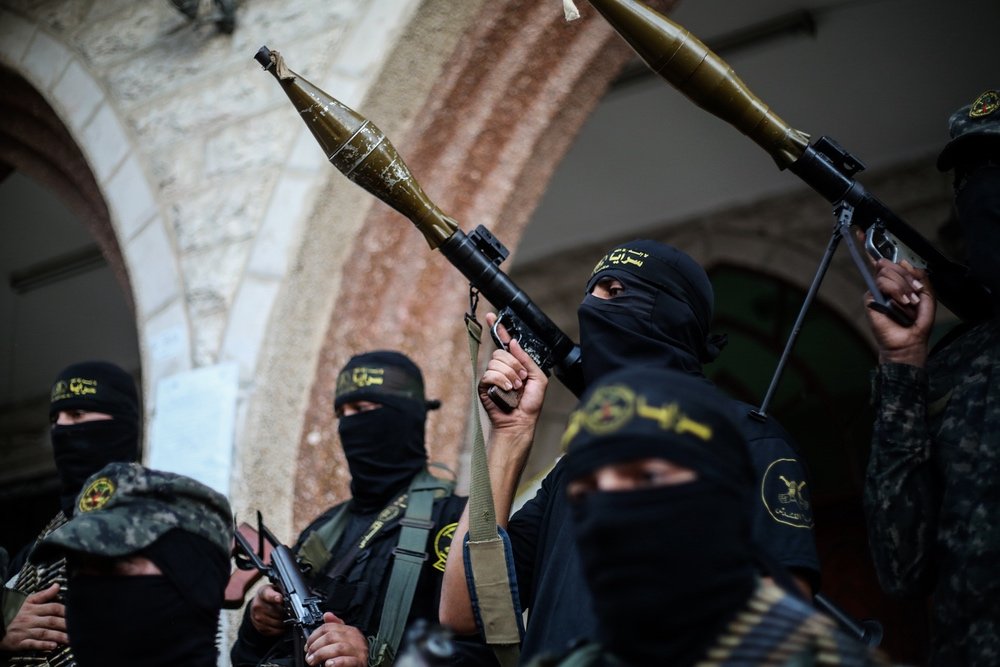 Role of Hamas and PIJ

Hamas and PIJ smell blood, according to the Israeli news service TPS.

The increasing Palestinian violence is seen as an attempt to overthrow the Palestinian Authority (PA) and to force the leader of the PA, Mahmoud Abbas, to resign.

Abbas is extremely unpopular among Palestinian Arabs in Judea and Samaria, and he needs the IDF to quell the rise of Hamas and PIJ.

Dissatisfaction with PA and Abbas

The PA lost further popularity after elections scheduled for last May were canceled.

The discontent with Abbas also spread to the Fatah movement, the party of the aging PA leader. Several young Fatah leaders are no longer taking orders from Abbas and are operating independently of the PA.

This is especially the case in the city of Hebron, which already has more than 210,000 Arab inhabitants.

The PA has effectively relinquished control of the city and is sitting idly by as Hamas fills the vacuum.

Israel is also concerned about the growing influence of Hamas and PIJ in PA-ruled areas.

The IDF is regularly carrying out night-time actions against members of the two terrorist movements there.

The Gaza-based terror group has deployed its branch in Turkey to coordinate terrorist activities in Judea, Samaria and Jerusalem.

Hamas leader Saleh al-Arouri is personally spearheading the group’s actions in these areas from Turkey, and earlier this month ordered an attack with an M-16 rifle on the Jewish city of Efrat in Judea.

That attack failed because the M-16 rifle of the 16-year-old terrorist from Hebron got jammed.

The youngster was subsequently arrested and during his interrogation the Israeli security services and the IDF learned that Hamas is ramping up its activities elsewhere in Samaria and Judea, and intends to increase terrorist attacks against Israelis.

In Gaza, meanwhile, Hamas and PIJ units carried out their intention to expand cooperation between the terror groups last week.

A major joint military exercise was held showing off the latest Hamas and PIJ weaponry, while Hamas fired an anti-tank missile at a dummy of an Israeli Merkava tank.

Several rockets were also fired towards the Mediterranean Sea. This was to show that Hamas and PIJ still have an arsenal of missiles at their disposal. 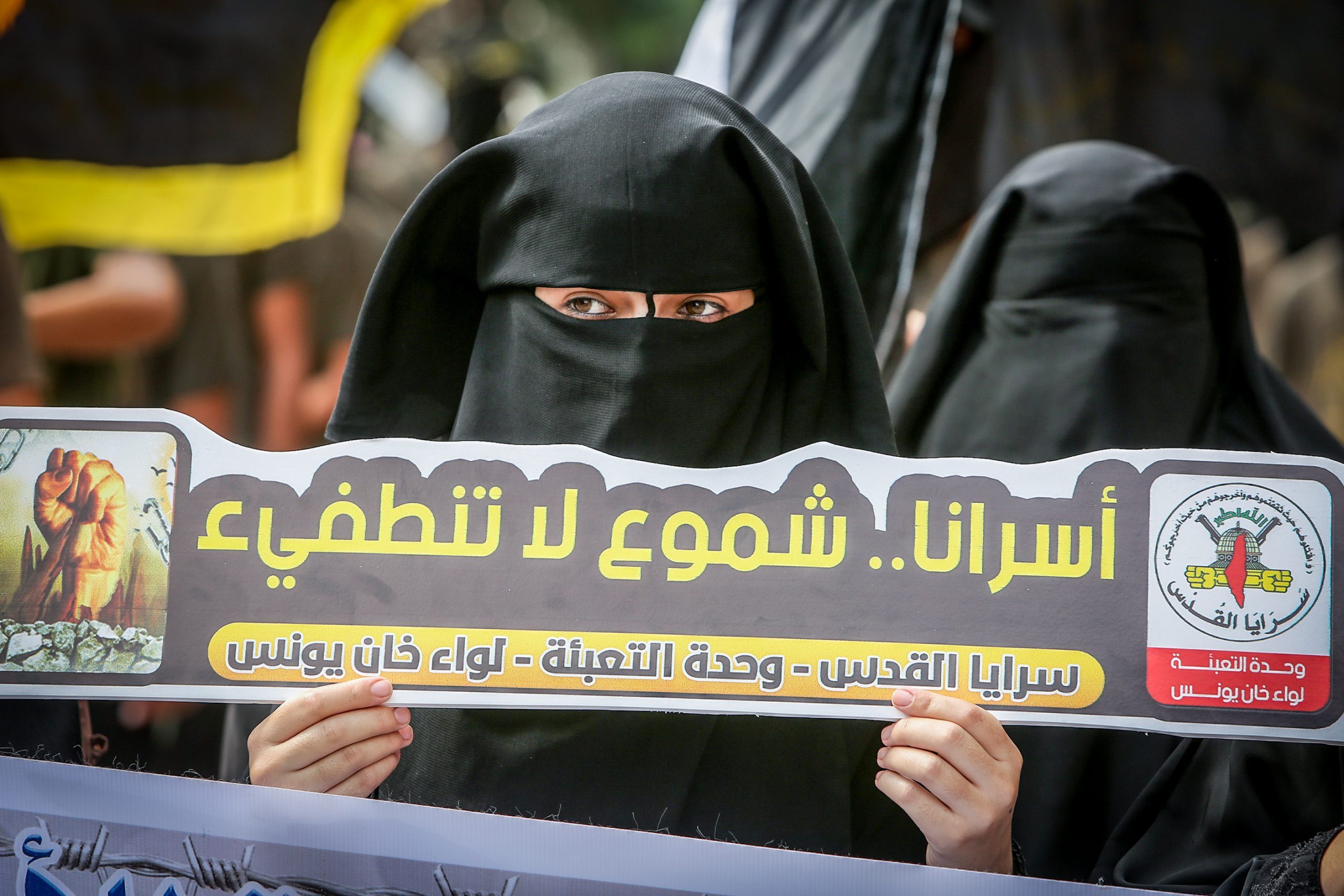 A Palestinian woman holds a sign supporting Islamic Jihad and demanding the release of the group’s fighters from Israeli prisons.

Meanwhile, threats to Israel by Hamas and PIJ leaders are also mounting after negotiations with the Israeli government stalled over a new prisoner exchange.

However, Israel seems determined not to make the same mistake as it did in 2011, when 1,027 Palestinian terrorists were released in exchange for IDF soldier Gilad Shalit, who was kidnapped by Hamas in 2005.

Egyptian government officials have been trying to negotiate an agreement between Hamas and Israel on a possible prisoner swap since May, but apparently failed.