After Donald Trump dashed their dreams of raising the PLO flag over Jerusalem, the Palestinians see in US President Joe Biden’s visit an opportunity to reverse course and sink their claws back into the Israeli capital.

But thus far they’ve been left frustrated by American officials trying to sideline the Palestinian issue.

At the same time, Israelis worry that more minor gestures Biden might toss the Palestinians as proverbial table scraps in order to keep them appeased could deeply impact the future of Jerusalem.

On Friday, Biden will travel the short distance from Jerusalem to Bethlehem and meet there with Palestinian leader Mahmoud Abbas.

Just before that he’ll visit Victoria Augusta Hospital on the Mount of Olives in a clear nod to Palestinian aspirations to establish their future capital in eastern Jerusalem.

Abbas had wanted the joint press statement he and Biden will make following their meeting to include a clear American commitment to Palestinian control of the entirety of eastern Jerusalem along the pre-1967 border, and thus reverse Trump’s recognition of a united Jerusalem as Israel’s eternal capital.

But according to Palestinian officials who spoke to Channel 12 News, the Americans said the best Biden can do is publicly acknowledge the Palestinian claim to the city and his belief that Jerusalem should be the capital of two nations.

While Biden is not expected to commit to Palestinian control of Jerusalem, it is believed he’ll make other far-reaching concessions on the matter.

The first is visiting Victoria Augusta without the accompaniment of Israeli officials. This is a clear signal that the Biden Administration, as opposed to Trump before him, does not view Israel as the sovereign in East Jerusalem.

Biden is also reportedly planning to upgrade the status of the Palestinian Affairs Office at the US Embassy and place it under the direct supervision of the US State Department. That’s short of establishing an official consulate or embassy for the Palestinians in Jerusalem, but only just. 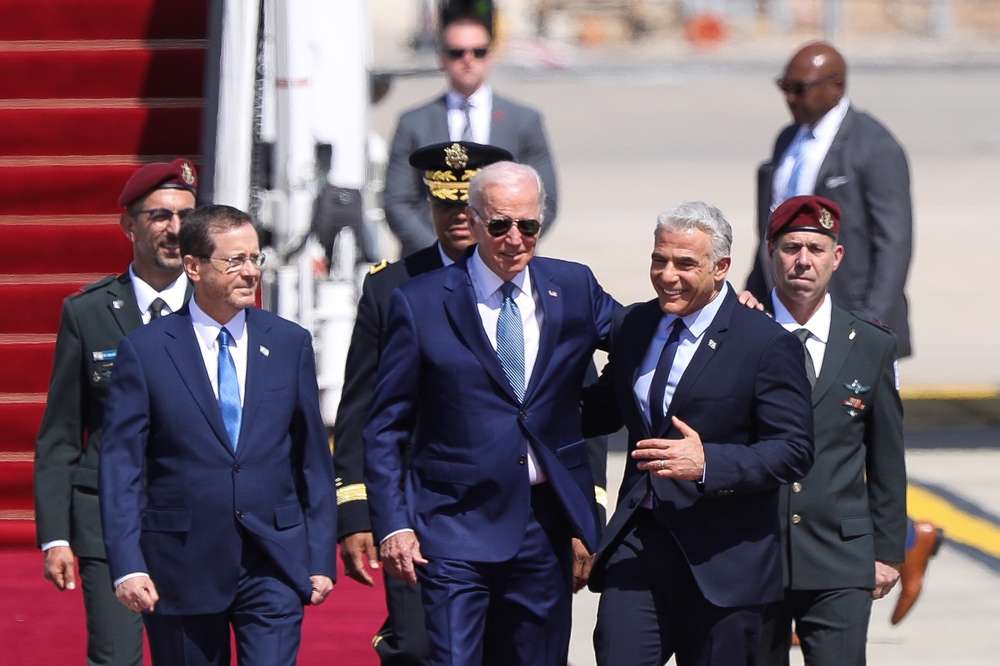 The presidential visit is a major political boon for interim Israeli Prime Minister Yair Lapid (right). But many fear he won’t be able to stand up to American pressure. Photo: Noam Revkin Fenton/Flash90

Abbas has instructed his government to refrain from criticizing Biden during the president’s Middle East tour, but has threatened future “measures” against both Israel and the United States if none of his demands are met this week.

In addition to Jerusalem, Abbas demanded that the US remove the PLO from its diplomatic blacklist and reopen the official PLO mission in Washington, DC. The blacklisting and the mission’s closure were also the work of Trump.

But following preparatory meetings with American officials last week, the Palestinians reportedly understood these topics will likewise not be on the table during Biden’s visit.

The meeting with Abbas is more of a courtesy, and a nod that the White House remains committed to a future Palestinian state, even if there are more pressing regional matters now occupying its time.

That realization did not sit well with Abbas and other Palestinian leaders.

“If Biden’s visit does not lead to the fulfilment of his commitments, especially [the creation of] a political horizon, it will be a failed visit.

“The [Palestinian] leadership has approved a series of measures [whose implementation] has been postponed until after the visit of President Joe Biden, at the request of our [Arab] brothers, our [foreign] allies and the US administration. I hope we will not be forced to [implement them]. We hope for a genuine breakthrough, but if the visit leaves us empty-handed, I believe that the Palestinian leadership will have no choice… The Palestinian issue cannot be ignored and its resolution cannot be postponed.”

While most of the threats were for renewed terrorist violence against Israel, Abbas emphasized during a government session in Ramallah last month that Palestinian retribution would also directly target America: