Have you ever wondered about the “furious squall” reported in the New Testament to have occurred on the rather mild lake we call the Sea of Galilee? I have lived in the Eastern Galilee near the lake for over a decade and only this week finally had my eyes (and ears) opened to this historical account recorded in Mark 4:37 (see below).

Anyone who visits the Eastern Galilee in the summer gets to know the afternoon breeze that blows inland from the Mediterranean Sea from about 1 PM to 8 PM. I have seen it fan brush fires and overturn shade umbrellas, but this pleasant afternoon airflow could hardly have been translated from the Greek in Mark 4:37 to mean:

And so I wondered, did the writers of the New Testament exaggerate a little bit…

But then on Saturday night as I tried to sleep, a windstorm threatened to blow away everything but the concrete house itself. When I woke up the following morning I half expected that the sheds in the yard would be knocked over. Luckily they were protected from the wind by a stone wall.

The boardwalk of Tiberias was not so lucky. There, the winds whipped up large waves on the Sea of Galilee. They wreaked havoc on the boardwalk, flooding dozens of shops and restaurants near the water. The Sea of Galilee is fuller than it has been in years — which had seemed like great news in the drought-ridden Middle East, until now…

“The easterly wind caused the waves to crash on the boardwalk and the entire shore… It looked like a scene from horror movies… I did not believe that the beautiful promenade of Tiberias could be destroyed in a matter of hours.

“Every year in the spring months, the wind in the Sea of ​​Galilee is easterly, known as the ‘whistler’ among Tiberians. When the water level is not high, the damage is minimal, but this year… the damage is unprecedented.”

The Tiberias boardwalk/promenade is the focal point of the only city on the Sea of Galilee, with its 1.5 million annual visitors (excluding COVID). A million of them are Christian pilgrims whose two biggest destinations in Israel are the Sea of Galilee and Jerusalem. To host them, Tiberias boasts five thousand hotel rooms.

The Sea of Galilee (Kinneret in Hebrew) is the lowest freshwater lake in the world at 210 meters (690ft) below sea level. It is located in the sunken trench of the Jordan River Valley starting north of the lake in Lebanon and continuing south all the way down to the earth’s lowest point at the Dead Sea (-436m; -1430ft). 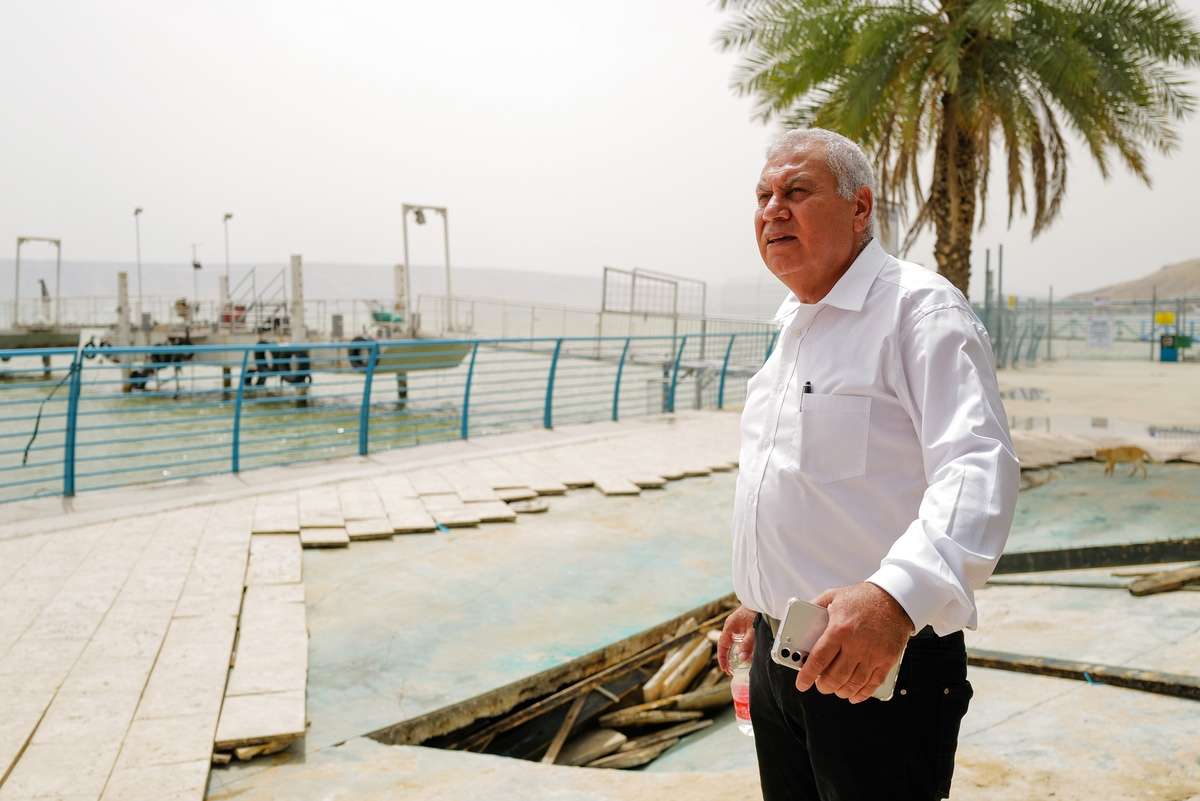 Boaz Yosef looks at the damage caused to the promenade in Tiberias as a result of strong winds, May 15, 2022. Photo: Michael Giladi/Flash90

The Israeli government’s meteorology service reported that large air pressure differences between the Galilee and the weather system in Syria/Iraq, combined with Galilee topography to cause the unusual weather:

“On the night of May 14 and in the early morning hours of May 15, strong easterly winds blew in the north of the country… of about 80 km/h with gusts close to 140 km/h [87mph] causing trees to collapse and block roadways… the strong easterly winds combined with the high water level of the Sea of Galilee, caused flooding and damage to the promenade of Tiberias. It should be noted that this combination has previously created such damages, and the most prominent examples are in the spring of 1992 and the spring of 1969.”

Preliminary estimates for repairing the damages along the Sea of Galilee and nearby are around $50 million.

That day when evening came, he said to his disciples, “Let us go over to the other side.” Leaving the crowd behind, they took him along, just as he was, in the boat. There were also other boats with him. A furious squall came up, and the waves broke over the boat, so that it was nearly swamped. Jesus was in the stern, sleeping on a cushion. The disciples woke him and said to him, “Teacher, don’t you care if we drown?”

He got up, rebuked the wind and said to the waves, “Quiet! Be still!” Then the wind died down and it was completely calm.

He said to his disciples, “Why are you so afraid? Do you still have no faith?”

They were terrified and asked each other, “Who is this? Even the wind and the waves obey him!” (NIV)