(TPS) Israel’s beaches have been inundated this summer by unusually large swarms of jellyfish along its northern border, and while it is currently causing difficulties to infrastructure and beachgoers, it is not an immediate cause of concern, according to Prof. Dror Angel of the University of Haifa’s Department of Maritime Civilizations.

While it’s natural for Israel to experience jellyfish blooms every year, what is unusual with this particular swarm is its intensity, Prof. Angel pointed out. Although it’s difficult to measure the size of a bloom since quantifying a constantly moving mass that lives above and beneath the ocean’s surface is almost impossible, photos alone demonstrate that this year’s bloom is indeed unusually large.

A likely reason behind the intensity of this year’s bloom is climate change and the long, cold winter Israel experienced over the past year.

“The past winter has been very rainy and cold at times. This may have affected the intensity of the blooms and their life cycle,” Angel offered. “We know for sure if there’s heavy rain, then lots of nutrients get washed into the sea. So there’s more algae, plankton, and more food for the jellyfish to eat.”

Angel pointed out that Israel experiences a large bloom of jellyfish similar to the one this year every few years. The last large blooms occurred in 2015 and 2017. Even if there is another abnormally cold and long winter in 2023, it does not mean we can expect more jellyfish the following summer, he said.

“Biology isn’t an exact science. There may be something that comes along in the ecosystem and eats the jellyfish giving us a small bloom next year,” he said. “What’s important to emphasize is that while jellyfish are a natural phenomenon, humans may be exacerbating matters. Pollution tends to equal more jellyfish.” 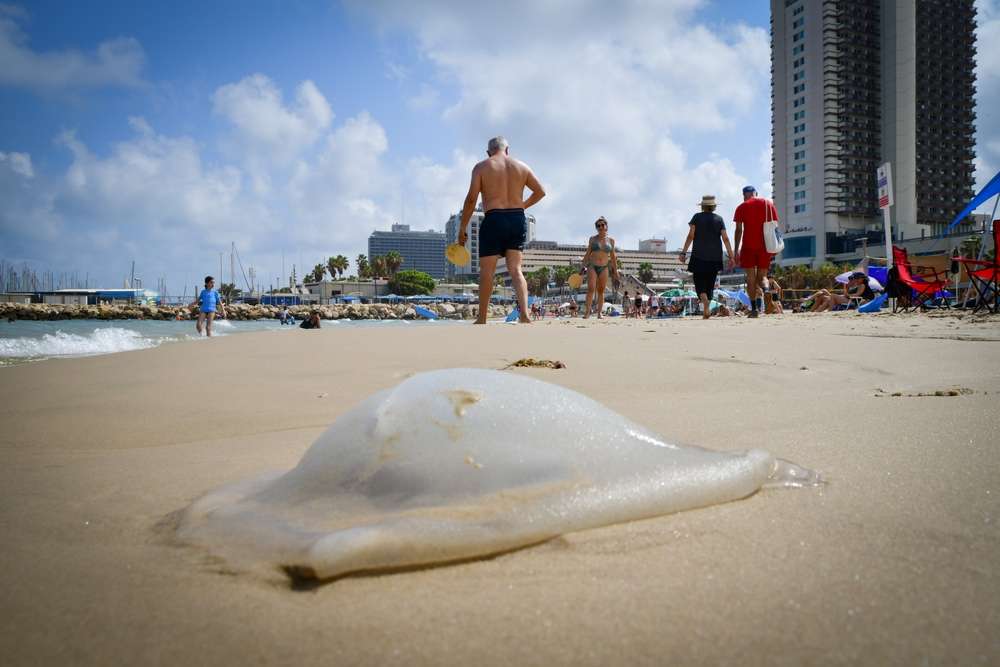 It’s not uncommon for jellyfish to hit Israel’s shores in large numbers. But this year’s “bloom” is particularly large, and researchers want to know why. Photo: Avshalom Sassoni/FLASH90

The jellyfish are huddled along Israel’s northern coast and have not yet reached the shore en masse. It is possible that a northern current will eventually push them into Syrian or Turkish waters, or the open sea.

On an ecological level, a growing jellyfish population may have a detrimental effect on the food web as they compete with many different fish for the same food sources. Thus, a jellyfish bloom can cause other fish to starve.

Additionally, power plants are often inconvenienced at a great expense because blooms can clog the turbines they use in the sea. Fisheries and desalination plants are also susceptible to being negatively affected when jellyfish blooms dominate the waters and coastlines.

For now, researchers are still trying to understand the movement and behavior patterns of jellyfish, especially how blooms are formed. Angel suspects that their tendency to be grouped together may be a result of some sort of communication between them for defensive or reproductive purposes.

To further complicate matters, Israel is home to about 10 different kinds of jellyfish so unraveling the behavior patterns of them all is an extensive undertaking for scientists.