This season, which is simultaneously filled with both the sadness of loss and the triumph of national renewal, is a time of remembrance. For many families, including myself, it is about the irony of remembering those that we didn’t get the chance to meet. For me, it is about remembering my dear uncle Eli, the uncle I never met, but of whom I nevertheless possess treasured memories that were passed down to me. Even my mother, Eli’s sister, barely knew him, but I would always glance at his picture that remained hung on the wall at my grandmother’s home. 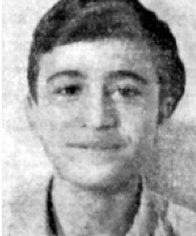 As time passed and I grew up, his picture formed an empty space in the room, and an even bigger one in my heart. He gazed upon us in silence as we celebrated Passover. His shining countenance was felt by all as he smiled at us during our weekly shabbat visits.

I always felt that the only time he would open his mouth and speak was when my grandmother would spend time alone in her room. This was because I would hear her talking, although no one else was present in the room. I knew that she was speaking to my uncle Eli. As I would enter her room she would suddenly stop, make a sharp turn away from his picture on the wall and wipe away the tears dripping down on her cheek.

The source of her sadness wasn’t just from losing her beloved son, but it also derived from a sense of guilt. She would often ask for forgiveness for sending a 16-year-old boy to the frontlines of the battlefield, ultimately to face his death.

To this day I have trouble comprehending the fact that such a young kid was sent to fight a war. How was this boy given such adult responsibilities by receiving a rifle with no military training whatsoever? This young boy faithfully went to fight in the battle in Jerusalem for Ramat Rachel and was struck with the fatal bullet that stole his last breath in this world like a thief in the night.

Eli is the uncle that I was never blessed with meeting in person. I’m certain that he would call his son Binyamin after my grandfather and his daughter, Miri or Mira’leh, after my grandmother. This is the custom of our family that has been passed down for generations.

Although I never knew uncle Eli, and none of his nieces and nephews did either, we know too well his final resting place on Mount Herzl in Jerusalem. My grandmother decided that every year on Israel’s Yom HaZikaron (Memorial Day), the whole family would pay their respects at his grave. Even after her passing, we continue this tradition.

Eli’s youngest brother Nissim continues to make sure that his name is seen on TV when the names of Israel’s fallen soldiers are broadcasted for the nation to see. Unfortunately, as the list grows longer every year, the time available to see his name becomes less and less.

Although I never met him, he will always be my loving uncle Eli.