With all the commotion and controvery brewing over the Temple Mount in recent days, we bring you a reminder of just how deeply rooted in the Jewish heart Jerusalem is today and forever so that you understand that Israel and the Jewish people shall not be moved!

It was in the year 70 CE that we lost her, but we never forgot her. Foreign armies pillaged, slaughtered and raped her, yet her name has remained on our lips three times a day in our prayers. With hope and faith of a day when she would come back to us, we could not give her up.

Then, on the 28th of Iyar in the Hebrew calendar, in the year 1967, we touched her sacred walls again, our hearts melted, and as the prophets foretold we once again heard in the streets of our Jerusalem “the sounds of joy and laughter, the voices of bride and bridegroom, along with the joyous songs of people bringing thanksgiving offerings to the LORD. They will sing, ‘Give thanks to the LORD of Heaven’s Armies, for the LORD is good. His faithful love endures forever!’ For I will restore the prosperity of this land to what it was in the past, says the LORD” (Jer. 33:11).

There are many stories describing the eternal connection and love affair between Jerusalem and the Jewish people. Here is just one. 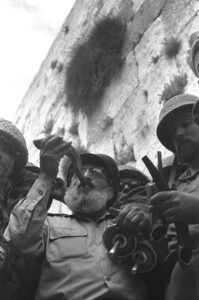 When the Israeli troops began to push back the Arab armies that had put the city under siege, IDF Chief Rabbi Shlomo Goren was desperate to be the first to reach the Western Wall. He grabbed a shofar and asked Col. Motta Gur, commander of the 55th Paratroopers Brigade, for a lift in his jeep. “I will give you a portion of my Olam Haba (World to Come), my eternal reward, if you get me there!” shouted Rabbi Goren. And so the two of them were the first to arrive, and that is how an iconic picture and the sound of that shofar have left an indelible impression on the Jewish heart forever.

“Ten measures of beauty were given to the world; Jerusalem received nine, while the rest of the world received one.” (Talmud)

Every year we celebrate Jerusalem Day, commemorating the moment when the divided city of Jerusalem was united under and with the Jewish people. Once she was ours, again, it was as though we needed to write a ketubah, a Jewish marriage contract, making sure never to part again. Following are some details of the contract binding the Jewish people to Jerusalem forever.

Israel’s reunification with her Jerusalem

Immediately following the Israel Defense Forces (IDF) victory in the Six-Day War in 1967, including the liberation of Jerusalem, Israel passed three laws in order to secure the city into the loving hands of the Jewish people for eternity. Jerusalem would be unified into one city, including is Arab-populated eastern half. Israeli law would be applied to everyone. The municipal boundaries of the city were tripled, and citizens of East Jerusalem were granted permanent resident status, allowing them to vote in municipal elections, but not in the Knesset elections in order to preserve the Jewish nation. And all holy sites in Jerusalem were to be protected.

However, there was so much international outrage and pressure against Israel’s reunification with Jerusalem that it took the Israeli government 13 years after the city’s unification, in 1980, to pass a law stating that “Jerusalem, complete and united, is the capital of Israel.”

Then after another 18 years, on the 28th day of the month Iyar, 1998 (March 23), the Knesset passed the Jerusalem Day Law, stating that “the Knesset hereby declares that Jerusalem Day and will be celebrated annually as a national holiday.”

And we are still celebrating. This year Jerusalem Day falls on May 29th.

It has taken Israel a long time even after being united with Jerusalem to get her hands around the political and social challenges of running such a diverse and important city. But really, it feels like the blink of an eye compared to the centuries of separation.

Love by the numbers

The Central Bureau of Statistics has provided some interesting data about our capital. Jerusalem continues to grow and according the most recent counting now has 942,800 inhabitants, by far the largest city in Israel and reason to rejoice! Sixty-two percent of Jerusalem’s residents are Jewish and 38% are Arab.

Jerusalem’s population is relatively young compared to the Israeli average (remember the prophecy): 33.5% of the population are less than 14 years old, compared to around 20% in Haifa and 18.5% in Tel Aviv (which everyone thinks is a “young city”). In contrast, the proportion of the older population is lower than in the other major cities. Only 9.2% of Jerusalem’s residents are of the older generation, compared with 20.4% in Haifa and 15.2% in Tel Aviv.

In Jerusalem, Israelis are getting married at a younger age than anywhere else in the country. Jerusalemites on average marry at 21.3 years of age, compared to a national average of 24.4 years. So there’s always plenty of singing and dancing in the streets!

In today’s world, there are not many moments we get to experience Heaven come to Earth. When Jerusalem was reunited with the Jewish people – this is just such a moment.