In 2001, UNESCO designated the Old City of Acre as a world heritage site, claiming that it is a classic example of a traditional Ottoman Turkish City in the Middle East that has remained “relatively unchanged for the last 150-300 years.”  One of the highlights of this ancient Ottoman city is Hammam Al Pasha, which was built in 1781 by Ahmad Pasha Al Jazzar and is internationally regarded as one of the most ornately beautiful Turkish bath houses in the State of Israel.

According to the Israel Antiquities Authority, “Many of the above-ground monuments scattered throughout Akko date to the late 18th century, when Ahmed al-Jazzar was appointed ruler of Damascus and its surroundings. Al-Jazzar turned Akko into his political center and conducted extensive building projects within the city; he fortified the city’s walls, refurbished the aqueduct, and constructed mosques, bathhouses, palaces, and caravanserai, all of which reflected the renewed prosperity—at least for al-Jazzar— in the region.”

Aside from Hammam Al Pasha, other historic remnants from this period in Acre are the iconic Ottoman-style Al Jazzar Mosque, which was built in 1781 and contains the mausoleum of Al Jazzar and his successor, Suleiman Pasha; a traditional Turkish bazaar; an 18th century Ottoman citadel that was built on top of an earlier crusader structure that the British utilized as a prison, which presently houses the Museum of Underground Prisoners dedicated to Jews who died while fighting against the British; Khan Al Umdan, which used to provide accommodation for merchants in the Ottoman era; and an Ottoman-era clock tower, which was built in honor of the jubilee of Sultan Abdul Hamid in 1906.

However, out of all of these Ottoman-era treasures in Acre, from my perspective, the Hamam Al Pasha is the most fascinating historical attraction that the city has to offer, as it offers a glimpse into how the average Ottoman citizen lived in Acre in the past.   Upon entering the Old City of Acre, I was guided by signs and the help of a local woman to the Hammam Al Pasha, which was tucked deep inside the Ottoman-era walled city.   Upon arrival, I discovered that the main entrance was closed for restoration work, so I was forced to utilize a side entrance.

I sat in the garden as I was given an audio recorder, which was to accompany me throughout my tour of the Ottoman-era hammam bath.  The tour is available in English and features the history of Ottoman Acre through the eyes of the hammam bath’s last bath attendant.    The Hammam Al Pasha was in use as a Turkish bathhouse prior to Israel’s War of Independence.  However, after the war, it was subsequently transformed into Acre’s Municipal Museum, which displayed the city’s archeological finds.     In the 1990’s, the museum was emptied and then made into a museum documenting what it was like to bathe in an Ottoman Turkish bathhouse.

In Akko: A City with a Dual Spirit, Andrea Simplici and Mario Boccio wrote: “The Hammam al-Pasha, as it must have been, is evoked through a video and light show, featuring the ghost of Hajj Bashir Awad, the last bath attendant to have worked here. With a voice made rough by life in a steamy environment, he recounts the story of Akko and its hammam, revealing the secrets of a good massage and describing the pleasure of smoking a narghilah water pipe and sipping tea in the reception room. Bashir was the last heir to a family of bath attendants, a dynasty claimed to have spanned 43 three centuries. Al-Jazzar selected this bath attendant personally: Omar Awad, a loyal soldier in his army, could not of course oppose his sovereign‘s wishes, though he did try to wriggle out of the job. He was, after all, just 36 years old, and had never thought he would end up running a Turkish bath.”

“He traveled to Constantinople to learn the secrets of the trade and was ready when the hammam opened in 1782,” they wrote.  “His family was never to leave the domed rooms of the Hammam al-Pasha: in 1952, the last attendant, Hajj Bashir, extinguished the flame that heated the water. The hammam was abandoned for many years, then turned into a museum, and eventually restored to its former splendor. Now we can only imagine the everyday life of this hammam, as statues, rather than loyal clients, laze in the entrance room to the bath. Other statues depict bodies waiting to become accustomed to the change in temperature, while in the caldarium, they lie sprawled on the burning-hot marble.”

According to them, “The hammam was the center of social life of a small community, a place for rest, for idling the time away, but also for light entertainment, parties, a mix of business and trade. Wrapped in hot towels, rich and poor were indistinguishable: the steam of the Turkish bath did away, as, at least for a few hours, it still does today, with differences of social class.” 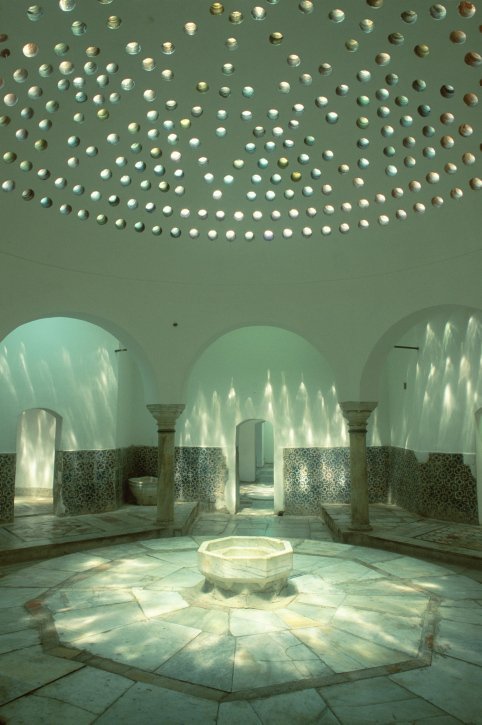 On the tour, they display a video called “The Last Attendant,” which recounts a vivid tale to tell the city’s history.  The video starts out by telling visitors who was Al Jazzar, who commissioned the construction of the bath house, so that worshipers at the Al Jazzar Mosque can bathe before praying: “Al Jazar was the governor of the district in its golden age.   I heard stories about him from my grandfather.   He especially liked to talk about how Al Jazzar defeated Napoleon.    Napoleon had landed here and said that Acre was the key to the holy land.  Al Jazzar set a trap for the French.”

With the help of the British, Al Jazzar successfully managed to keep Napoleon out of Acre, which caused the French leader to withdraw in disarray.   This act prompted Al Jazzar to win much respect throughout the Ottoman Empire.

According to the video, Al Jazzar’s reasons for building the bath house were blatantly obvious: “With all of the palaces and great walls, Al Jazzar realized that the city needed a bath house.  Then, he built one and called my grandfather to say: I am building a new hammam.  I want you to be the chief attendant.”  According to the video, his grandfather preferred to serve Al Jazzar as a soldier and not to run a hammam bath.   But, it was all in vain: “You are going to Istanbul.  The sultan’s bath attendants await you.”  So, he started a bath dynasty that would last several hundred years.

Israel Today spoke with a local resident of Acre, who claimed that Hammam Al Pasha is one of the “great jewels of the city.”  However, this resident felt greatly sad that the Hammam Al Pasha today is just a museum and not an operating bath house: “It would be better for the local residents and tourists alike if Hammam Al Pasha was an operational hammam today like it was in past generations, so that tourists and locals alike can enjoy bathing in this historic bath house, like one can in other areas of the Arab world.”

However, it should be noted that it is possible for tourists to enjoy the Ottoman Turkish bathing experience at the Ghattas Turkish Bath House in Acre.   For 800 NIS, a couple or a couple of friends can spend two hours alone in the hammam, receiving unique Turkish massages, bathing in hot steam, enjoying a jacuzzi and sauna, and sipping traditional Turkish tea with sweets and fruit.   Like the Hammam Al Pasha, the Ghattas Turkish Bath House is also located inside of a historic building.   However, the difference is that the building was not commissioned by the great Al Jazzar, the mastermind behind so many Ottoman-era buildings in Acre who had the honor of outwitting Napoleon and keeping him out of the Holy Land.