Sandra Solomon is the niece of Saher Habash, one of the founders of the ruling Palestinian party Fatah and a leader in the campaign of terror known as the Second Intifada.

Her pedigree notwithstanding, Sandra counts herself today as a proud Zionist. After moving to Canada, Sandra converted to Christianity. She then went so far as to tattoo the ancient Messianic Jewish seal on her arm, surrounded by the words Yeshua HaMashiach, in Hebrew. 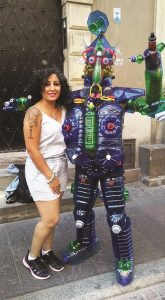 Despite the danger in which such a bold statement places her, Sandra often visits her hometown of Ramallah. It was during one of these recent visits that Israel Today Editor Ryan Jones spoke to Sandra about the stand she has taken in a place where holding such positions requires more than mere courage.

Israel Today: How did you come to faith in Jesus?

Sandra Solomon: It was a soul-searching journey for God that led me to read the Bible from Genesis to Revelation.

Is your family accepting of your conversion?

Of course not. I am an apostate. I should be executed. My whole family disowned me. If I go to Jordan, my brother will definitely kill me.

Is it like this for all Palestinian Muslims who become Christians?

Not just Palestinians. This is what all who leave Islam must suffer, according to Sharia Law.

Today you live in Canada, but when visiting the West Bank, do you get any reactions to your tattoo?

I am verbally assaulted a lot here in the West Bank. Many see the tattoo and at first think I’m a Jew. One guy spit near me and cursed me. Imagine what would happen to a real Jewish person, just because they are Jewish. It is racism. It is antisemitism. It is disgusting.

How did becoming a Christian change your views on Israel?

When I read the Old Testament, I learned so much truth about the Jews and how they suffered. I cried for the Jews for the first time in my life. Then I read that Jesus said to love your enemies, and he changed my heart. But it wasn’t just random love, it was love based on understanding.

Growing up as Muslims, all we were taught about the Jews is that they are the descendants of pigs and monkeys, that they are infidels who must be purged from the land through jihad. Now, I’m disgusted when I hear people cursing Israel and the Jews. They don’t realize that it’s by the power of God that Israel exists.

Some Palestinian Christians deny that modern Israel has anything to do with the Bible. What do you think?

This is shameful. It’s hard to call them true Christians when they [seemingly] know nothing about the Bible. They sympathize with the other Palestinians, but are blind to the truth.

True Christians must believe in the whole Bible, from Genesis to Revelation. A true Christian would never turn their back on Israel or the Jews.

As a Christian who holds these views but is sitting on the other side of this conflict, do you see any hope for peace?

The only hope is for Israel to stop compromising so much. Of course there are Palestinians who want peace, but the majority seeks the destruction of Israel. The two-state solution is not a solution. Israel should have all the land.

I’m doing seminars also with Jewish groups to explain the true source of the conflict. Many Jews are also ignorant of this. The hate is rooted in the Koran and the Hadith.

This interview was first published in the October 2017 issue of Israel Today Magazine.