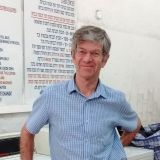 Conceived in Cape Town within months of the rebirth of Israel, 70-year-old Charles Gardner was brought up in South Africa before joining his half-Jewish grandmother in London as a 21st birthday present, which turned out to be permanent. As with the Jewish state, he too was duly born again and, as he grew in his Christian faith, became increasingly aware of the crucial place of Israel in God’s purposes.

After a spell as correspondent for the South African Press Association, he moved to Yorkshire, England where he worked as reporter and later editor of various newspapers while also founding Christian publications.

Descended from Portuguese Sephardic Jews who managed to survive the Spanish Inquisition, he is married to Linda, 62, who teaches Christianity and the Jewish festivals in primary schools.

Author of several books including Israel the Chosen (Amazon), Peace in Jerusalem (olivepresspublisher.com) and A Nation Reborn (Christian Publications International), he has four children and nine grandchildren, loves sport and is still a keen runner.

Judgment on the Nations

‘They scattered my people and divided my land’

The Command to Rest

Traditional Christian interpretations notwithstanding, nowhere does Jesus suggest riding roughshod over the Sabbath.

The Beast is Released

Elijah contest with Baal prophets now on a global scale

A Call for Courage

We are surrounded by ‘a great cloud of witnesses’ (Heb 12.1)

Jesus is our ‘atonement’ – and remedy for death!

Further signs of the imminent return of our Lord and Saviour

Right to land hidden in archives while propaganda flourished

The recent blast in Lebanon looks like a prophetic warning to those who continue to mess with God’s chosen people.

Sheltered under the wings of the Almighty

Jewish woman finds herself in conversation with God

If you love Jesus, you will love the Jews – his brothers in the flesh

Are we heading for the Bible’s great end-time conflict?

The dynamite we all still need

The Diary of Anne Frank

An apt lesson for our times in lockdown