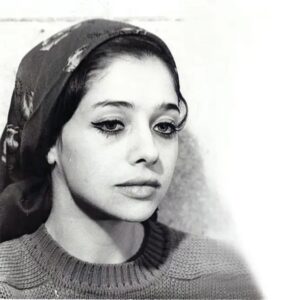 Tirza Atar was a poet, songwriter, writer, singer, actress and translator. Born in 1941 in Tel Aviv, she was the daughter of well-known poet Natan Alterman and Rachel Marcus.

She studied acting, appeared in a number of plays, and translated for 25 different shows.

In this song “My God who is behind the cypress tree” she conveys her plea, her great yearning for love, the need all of us have, the longing that cannot be given up.

In the song she speaks to God playfully in the midst of her sorrow and pain, and asks him if maybe he, God, might be willing to cause her man to not forget her birthday this year, and maybe even bring her a gift.

She addresses God the great Creator of the sun and moon. But at the same time he is also her personal God, who is close to her, just beyond the cypress tree. Like in my recent article on another Israeli singer, this conversation with God is also painfully open and direct.

The melody turns the words into feelings and emotions, creating a song that is still relevant and touching.

On September 7, 1977, at the tender age of 36, Tirza Atar was killed when she fell from the window of her sixth-floor apartment. Her family said it was an accident, but others reluctantly conclude that it was suicide.

The song was performed by famous singer Hava Alberstein, known for her touching and timeless ballads. Hava is still an integral part of the cultural landscape of Israel.

My God who is Just Beyond the Cypress Tree

(Here translated especially for you from the original Hebrew)

My God who is just beyond the cypress tree,
The one trembling in the breeze,
My God, it’s three o’clock,
Monday, nineteen seventy-one …

And today is a birthday for me,
In Tel Aviv its three,
It’s not every day I’m born,
And it’s not every day you are behind the cypress tree.
Make my man remember, O God, give him a sign,
God of women, God of surprises,
God of the suns and moons,
God of gifts and flowers,
Make him remember this year,
Cause him bring a gift.

My God, who’s behind the cypress,
The tree whose head is bowing in the wind’s caress,
It’s May 5th, three o’clock,
Monday … what do you care, what do you care if he comes? …

I have a birthday today,
Last year he forgot,
And also the year before last
He did not remember, he’s always so confused.
Make him remember, O God, give him a sign,
God of women, God of surprises,
God of the suns and moons,
God of gifts and flowers,
Make him remember this year,
Cause him to bring a gift.

My God, who’s behind the cypress tree,
The tree which bowed its head toward me,
My God, it’s already after three,
And for me it’s already a little after thirty ...

God of the moons and suns,
God of nothing,
God of forgetful ones –
So what if another year has passed?
We need gifts just ‘cuz of that?
My God…