In the Dutch language there is a saying that goes “carrying water to the sea,” which means your actions are a waste of time and energy.

The saying is now applied in reverse order by Israel to the Sea of Galilee, or ‘Kinneret’ in Hebrew, and the project will not be a waste of time, but finally solve Israel’s water problem.

The Sea of Galilee not only makes headlines in the winter, when the rise of the water level is reported on a daily basis, but also in the summer when the water level of the lake falls too far.

This happened, for example, in 2020 when the level almost fell below the lower red line at the end of the summer.

The Kinneret’s water level had then dropped to 214.87 centimeters below sea level, and that extremely low level was referred to by experts as the “black line.”

That was after a series of dry winters, and there were fears of irreparable major ecological damage if the level fell even further.

Mekorot, Israel’s national water company, was then forced to extract 17,000 tons of salt from the waters of the Sea of Galilee to prevent it from becoming brackish.

In March 2021, however, the water level in the lake almost reached the uppermost line of 210 meters below sea level.

That was after a very wet winter, and then Mekorot almost decided to open the locks of the lake in Kibbutz Degania so that the surplus of water could flow through the Jordan River to the Dead Sea.

Consequences for the Dead Sea

The Dead Sea is in serious trouble with the water level dropping by one meter almost every year for the past 30 years.

Entire beaches have now disappeared due to the falling water level and the Dead Sea coast has become a dangerous area because of large sinkholes.

The rapidly falling water level of the Dead Sea could have been prevented in part by stopping mineral extraction by the Dead Sea Works.

This company sells the minerals all over the world where they are used for the production of cosmetics and as road salt for frozen roads in winter.

Other factors that play a role in the rapidly falling water level are evaporation and a low flow of water from the Jordan River.

There was a plan to build a canal from the Red Sea near Eilat to the Dead Sea that was presented by Israel to Jordan and the Palestinian Authority, which lays claim to the northern part of the Dead Sea.

This eventually led to Jordan’s decision in 2021 to pull the plug on the joint project after Jordanian officials claimed that “Israel had no desire” to execute the earlier decision.

There was some truth to this claim since residents of the Israeli communities have repeatedly protested the lack of political will to act against the developing environmental disaster.

Resistance to the plan also came from Israeli ecology experts who said they feared that the less-salty water of the Red Sea would lead to massive algae formation. 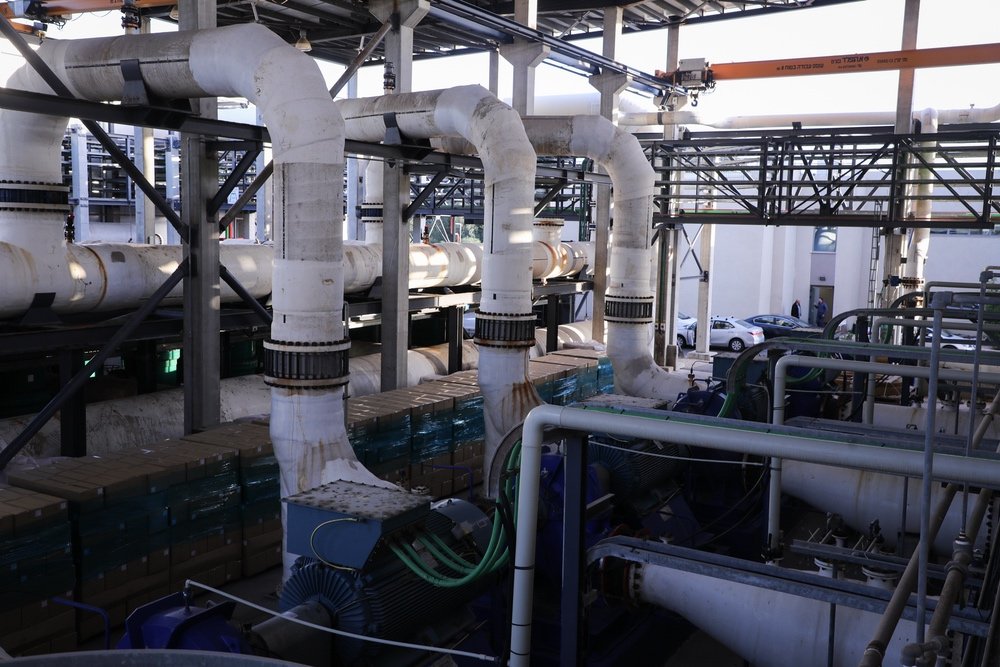 Israel’s desalination plants are the envy of the Middle East. They today meet about half of Israel’s domestic water needs. Photo: Isaac Harari/Flash90

A solution in sight for the Dead Sea and Kinneret

Fortunately, it now appears that a new project for the Sea of Galilee could also provide a partial solution for the now indeed dying Dead Sea.

That project is based on the idea of pumping excess water from desalination plants along the Mediterranean coast to the Sea of Galilee.

The project is currently at an advanced stage and excavation work is now underway in the area around Moshav Migdal, which is located at a distance of a kilometer from the lake.

The excess water from the desalination plants will be pumped to the Sea of Galilee, where it will raise the water level by more than half a meter per year. Two more of these plants are currently under construction.

Consequences for other countries

The Knesset approved the first phase of the project in June 2018, setting aside about NIS 105 million ($30 million) for desalination projects, cleaning streams, and building new pipelines to the Sea of Galilee. The total costs of the entire project will cost Israel around $1 billion.

“We are turning the Sea of Galilee into a reservoir for desalinated water,” then-Prime Minister Benjamin Netanyahu said at the time.

“This is innovative and important, and has not been done anywhere else to date,” the former Israeli PM added.

Indeed, it is the first time that a country has pumped fresh water extracted from the sea into a lake, and that could be a solution for other countries ravaged by drought.

In Jordan and parts of Iran, for example, citizens can barely get enough drinking water from the tap per day.

For Israel, this was the reason the government offered aid to both Iran and Jordan.

Needless to say, Iran declined the offer, but Jordan immediately struck a deal with Prime Minister Naftali Bennett’s government and accepted an offer to buy additional water from Israel.

The deal worth $33 million comes on top of the 50 million cubic meters of water that Israel supplies to Jordan every year under the 1994 peace agreement.

Israel is also a world leader in wastewater recycling with about 87% of the country’s wastewater treated and recycled.

This purified water is not fit for human consumption, however, and is therefore supplied to farmers for irrigation.

According to EcoPeace, a joint Israeli-Jordanian-Palestinian environmental organization that advocates better water policies in the region, about 50% of Israel’s agriculture is currently grown on treated wastewater.

The amount of purified water along with the recycled wastewater means that technology is responsible for supplying approximately one billion cubic meters of water per year, and this constitutes 50% of Israel’s domestic needs.