New DNA testing has shown that the Philistines, that arch-enemy and nemesis of Israel, came to the Land from Europe more than 3,000 years ago.

The giant Goliath was a Philistine. So was Delilah, who entrapped legendary warrior Samson. They proved to be among Israel’s most dangerous adversaries, yet for all their appearances in the biblical texts, the origins of this “seafaring” people, and why they came to this land, remained a mystery, until now.

Findings from DNA samples taken from skeletons buried beneath Philistine houses in Ashkelon, one of the five main Philistine cities in southern Israel, now show that the Philistines came to Israel from southern Europe. “Our study has shown for the first time that the Philistines immigrated to this region in the 12th century (BC),” said Daniel Master, director of the Leon Levy Expedition to Ashkelon, the coastal city where the first-ever Philistine cemetery was found.

It was thought by Bible scholars and historians that the Philistines originated in Caphtor, the Hebrew name for the island of Crete and the whole Aegean region (Amos 9:7; Jeremiah 47:4). We know that the Philistines were an aggressive, warmongering people who occupied territory southwest of Israel between the Mediterranean Sea and the Jordan River. The name “Philistine” comes from the Hebrew word Philistia, and the Greek rendering of the name, palaistinei, gives us the modern name “Palestine.”

They were also considered foreigners who immigrated to the region, and the Israelites frequently referred to the Philistines as “uncircumcised.” Swine remains uncovered in Philistine cities also point to them coming from beyond the borders of Israel.

“We didn’t show it by showing similar styles of pottery, we didn’t show it by looking at texts, we showed it by looking at the DNA of the people themselves,” Master said of the tests taken from over 100 skeleton samples uncovered in the Philistine cemetery in Ashkelon. “The Philistine ancestors left their southern Mediterranean homelands during a time of flux,” Master explained. “It was the period of the Trojan War, and with the collapse of the ‘heroic empires’ in the 13th-12th centuries BCE, these Philistine migrants sought a new life in a new land. They primarily settled in five cities, Ashkelon, Gaza, Ashdod, Gath and Ekron, along or close to the southern coast of modern Israel.” 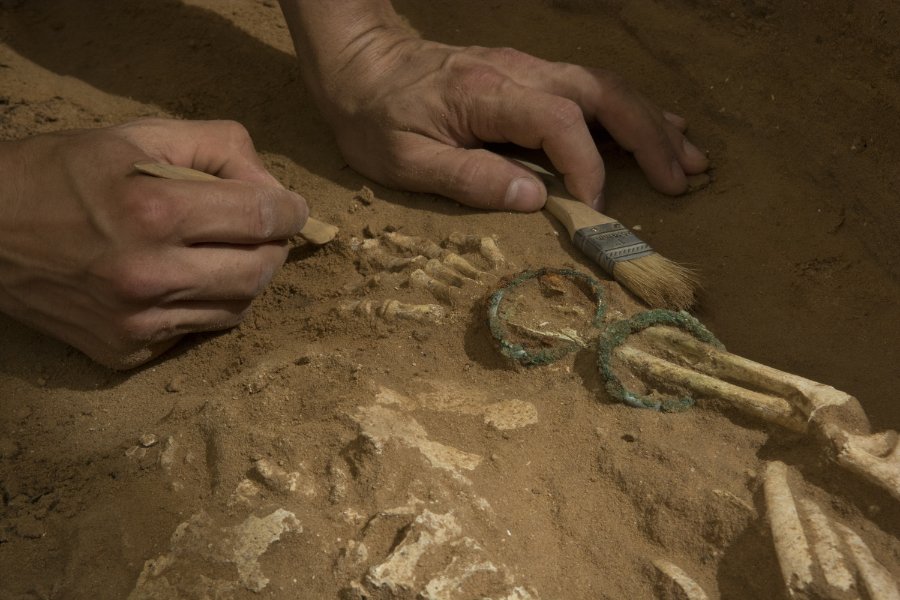 According to Michal Feldman, lead author of the Ashkelon cemetery study, “This ancestral component is derived from Europe, or to be more specific, from southern Europe, so the ancestors of the Philistines must have traveled across the Mediterranean and arrived in Ashkelon sometime between the end of the Bronze age and the beginning of the Iron age.”

It appears that it was not only a new life these warmonger Philistines sought in the Land of Israel. From the Bible we learn that the Philistines proved a resilient adversary in battle, for they fought with iron weapons and chariots. The Bible reports that they came with “30,000 chariots and Goliath’s spearhead alone weighed 15 pounds! (I Sam. 17:7) This was the Age of Iron, and these Philistines arrogantly came to Israel intending to invade and conquer the “land of milk and honey.”

But the scriptures confirm that ultimately, it is “not by chariots and not by horses” that the victory comes, but by “calling on the name of the God of Israel.”