Every year during the spring and autumn, the largest bird migration in the world takes place in the Agamon Hula region of northern Israel. Birds from Asia, Africa, Europe, and the Middle East, all can be found at this unique site. The migration patterns of these birds have been changing over the years. What does the future hold for the birds facing climate change and habitat loss?

Millions of bird songs can be heard as they cloud the skies over the Hula Nature Reserve in northern Israel during their seasonal migrations to and from Africa. The birds that migrate with their young during the fall and spring make use of the Hula Nature Reserve, located in the Upper Galilee region of Israel. Here, they replenish their energy for the rest of their journey by roosting and feeding in the fields. The birds have a safe resting area while visitors can take advantage of the park’s facilities and appreciate these animals in their natural habitat. In addition, the guests can learn more about the birds and the challenges they face, including climate change and anthropogenic modifications to their natural habitats.

Migration in the Hula Nature Reserve

From the moment you enter the Hula Nature Reserve, the most heard sounds are the tens of thousands of roosting cranes. The common crane (Grus grus) is the main species of the great migration that occurs in the Hula Valley, with 60,000 individuals found throughout Israel.

“The Hula Valley used to be a swamp with water flowing continuously from the Jordan River, but this changed when the valley was drained in the early 1950s and turned into agricultural land,” says Shai Agmon, Manager of the Agamon Hula KKL Avian Research Center and site ecologist.

In addition to draining the Hula Valley, many other countries such as Egypt, Sudan, and Ethiopia began to drain their wetlands, rivers, and lakes as well. This made crossing the Sahara Desert even more difficult since these particular landscapes served as resting grounds for migratory birds. “The birds didn’t use to stay in Israel or in Europe, but anthropogenic modifications made this place an auspicious environment for them to stop here every year for a few months,” says Agmon.

By the end of the 1950s, the first 100 cranes spent the winter in Israel. In the 1990s, this number increased to 5,000. Today, 60,000 cranes are found in the Hula Nature Reserve, along with more than 300 species of birds. These numbers are documented through weekly counts by the staff at the reserve during the migration period, and every two weeks in winter and summer.

These extensive counts are performed in a rather simple manner. An observer is located with a car every 200 meters and is in charge of counting the number of birds that fly between themselves and the next counter. Sometimes, an individual count can be as high as 15,000 birds in one sitting.

The cranes start to arrive from Europe at the end of October. Some stay while others leave to migrate to Africa before the winter. “Those that are still here at the beginning of December will probably stay until March, while those that have left will return in March,” says Agmon.

The birds that stay can pose a threat to crops grown on the extensive farmlands of the Hula region. Agmon says that the Reserve came up with a simple solution to this potential problem: feed the birds Israeli corn. “The cranes that stay here in December are fed but not because we want to keep them here,” he says. “If we didn’t feed them, they would eat the local crops, which would cause conflicts with the farmers in the area.”

It is still uncertain if the number of cranes that stay after migration will increase. Their migratory patterns have changed for reasons that are not yet fully understood but could be attributed to climate change. 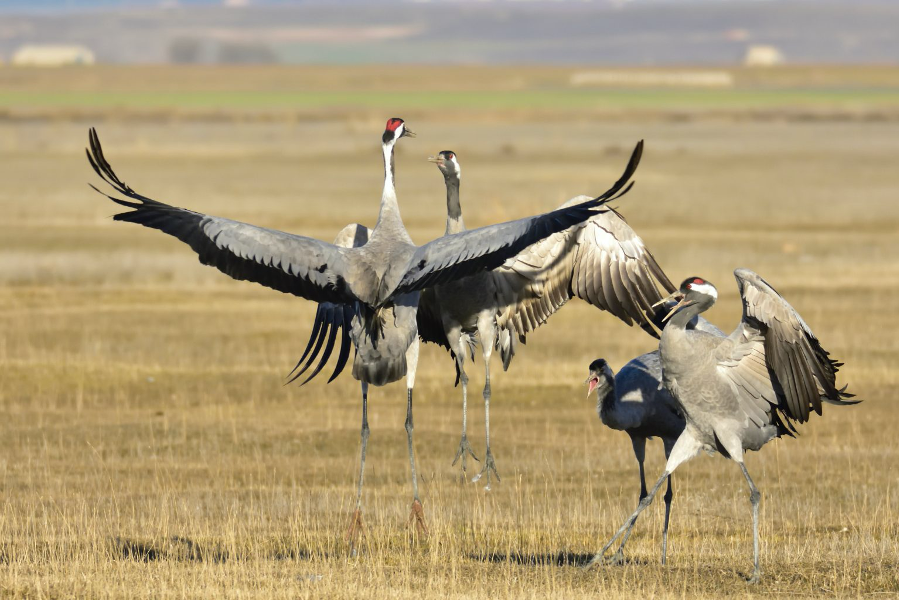 The common crane (Grus grus) is the main species of the great migration that occurs in the Hula Valley, with 60,000 individuals found throughout Israel. Photo by Santiago Lacarta on Unsplash

The Future of the Hula Nature Reserve

Two years ago a research study began at the Hula Valley to check if there are bird hybrids, a crossing between two different bird species. After 200 DNA samples were examined, it was determined that there were 20 hybrids present, some of which were even second generation and fertile. The hybrids do not represent new species, but they exhibit changes that could lead to a speciation phenomenon.

Meanwhile, work is being done in collaboration with the Nature Protection Society (SPNI) and the Jewish National Fund (JNF) in order to pressure the electrical companies to bury the power lines that cross the reserve. The electricity company built low-lying powerlines in the region, with which the birds can easily collide. A wounded bird has low chances of survival because the park also has predators, such as wild boars, wild cats, and jackals that prey on these injured birds.

Today there is only one animal rehabilitation center in Israel, which is located in the Ramat Gan Safari. They are equipped with an animal ambulance (“chai-balance”) that is able to transport the injured animal for treatment and release it back to its original habitat. This center treats more than 10,000 animals a year. To help the efforts of the Ramat Gan Safari, “starting in December, new rehabilitation cages will be built in the Agamon Nature Reserve to bring birds from the animal hospital to release them right here,” says Agmon. “Later on, hopefully, we will have an ER unit here for animals as well,” he adds, so that they can help care for some of the birds from the Ramat Gan Safari.

Apart from the research and collaborative work done on behalf of the birds, educational initiatives are also underway at the Hula Valley Reserve. The opening of the Stephen J. Harper Visitor and Education Center, named after a former Canadian Prime Minister, is the most advanced visitor center in the country. It has breathtaking views of the reserve, an interactive bird quiz that covers an entire wall of the center, and a virtual reality device that allows visitors to ‘fly’ with the birds, and interactive games. It also has a theater, restaurant, art gallery, and many images of wildlife with live information of the arrivals and departures of birds found in the Hula Valley.