From a press release provided by United Hatzalah.

Walter and Oscar Blau, a pair of Holocaust survivor brothers from Israel, were sure they were the only ones in their family who survived the Holocaust and World War II. To their surprise, they discovered that they have an entire family living in the United States, a family which they knew nothing about until very recently, and for the first time, reunited in Jerusalem in April.

The story of the family reunion began with a determined granddaughter who embarked on a journey to find lost family members, and ended with a heartfelt and exhilarating reunion in which long-lost relatives shared a Bar Mitzvah at the Western Wall at the age of 90.

By the Dung Gate in the Old City of Jerusalem, musicians prepared for the Bar Mitzvah. Everything seemed pretty routine until the bus stopped and out came three Bar Mitzvah grooms – aged 92, 88 and 79 – Walter Blau, Oscar Blau and George Weiss. George was a complete stranger to the other two men until about a year ago, and today he is their closest relative for all intents and purposes.

The story of the trio began during World War II. At the onset of the Holocaust, brothers Walter and Oscar Blau, then aged 10 and 6, fled with their families from Austria and were sent to an orphanage in Belgium. They stayed there for as long as the fires of Europe stayed burning. At the end of the war, they looked for family members who may have survived, but unfortunately found no one. The two brothers later immigrated to Israel and built their own families. For decades they believed themselves to be the sole remaining survivors of their family.

Meanwhile, far across the ocean in the United States lived three cousins, the family of Walter and Oscar, who managed to flee Austria prior to the onset of the war. They too thought that they were the last remaining relatives who survived. 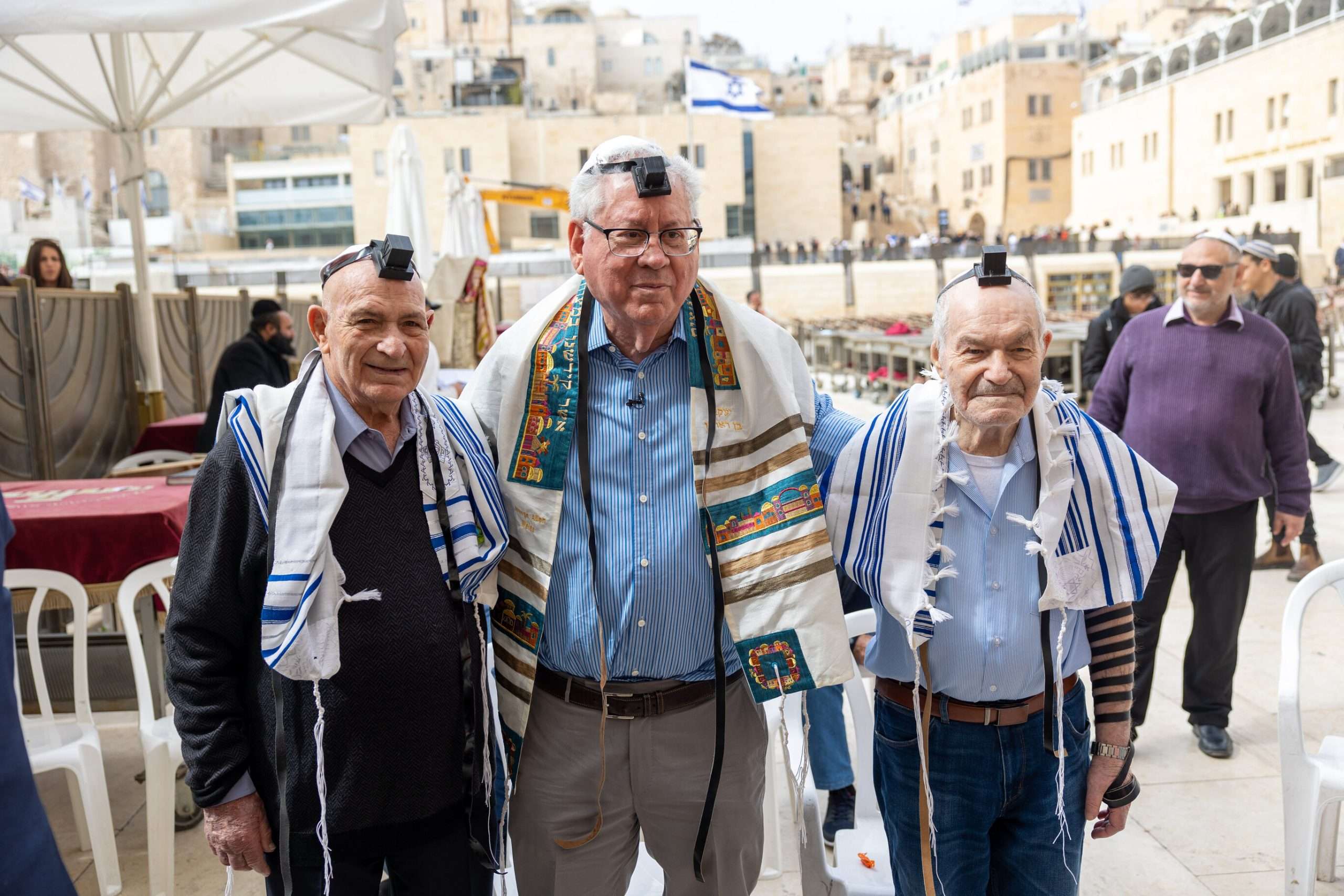 Brothers Walter and Oscar Blau and their cousin George Weiss at the Western Wall for their joint Bar Mitzvah. Photo: United Hatzalah

The box that led to a 25-year-long detective journey

With the death of Walter and Oscar’s first cousin, Robert, in 1993, he left behind an intriguing box of pictures and letters to his granddaughter Suzanne. In some of the pictures were of relatives that Suzanne did not recognize. She decided to investigate and began a journey to find out what happened to the family left behind during the Holocaust. Over the course of the next 25 years, Suzanne searched for survivors. She hired German translators to understand what was written in the letters and searched for her family in various databases and archives in Europe as well as in Israel, until she finally found a clue and the initial connection was made.

Daphne Blau, Oscar’s daughter, recalled the first contact she had with Suzanne, which occurred on March 30th, 2021. “She contacted me via Facebook Messenger, in very official writing, and said, ‘Hello, my name is so and so, I do not want any money.’ This was how she started the conversation. ‘If you are related in any way to Walter Blau, Oscar Blau, or Edmund Blau (who was their father), and they were born in Vienna,’ she listed a few more details, ‘Then contact me because we are probably family.’”

“I answered her – ‘Yes, I know all the information, I know all the details. Tell me more because we really seem to be family,” Daphne added. “She sent me pictures of their father Edmund. These are pictures that neither my father nor my uncle had because they lost him when they were children. All they had was a picture of him when he was older already, and Suzanne sent me pictures of him when he was younger. I showed the pictures to Walter and Oscar, and when they saw them, they said, ‘That’s him, that’s our father.’” 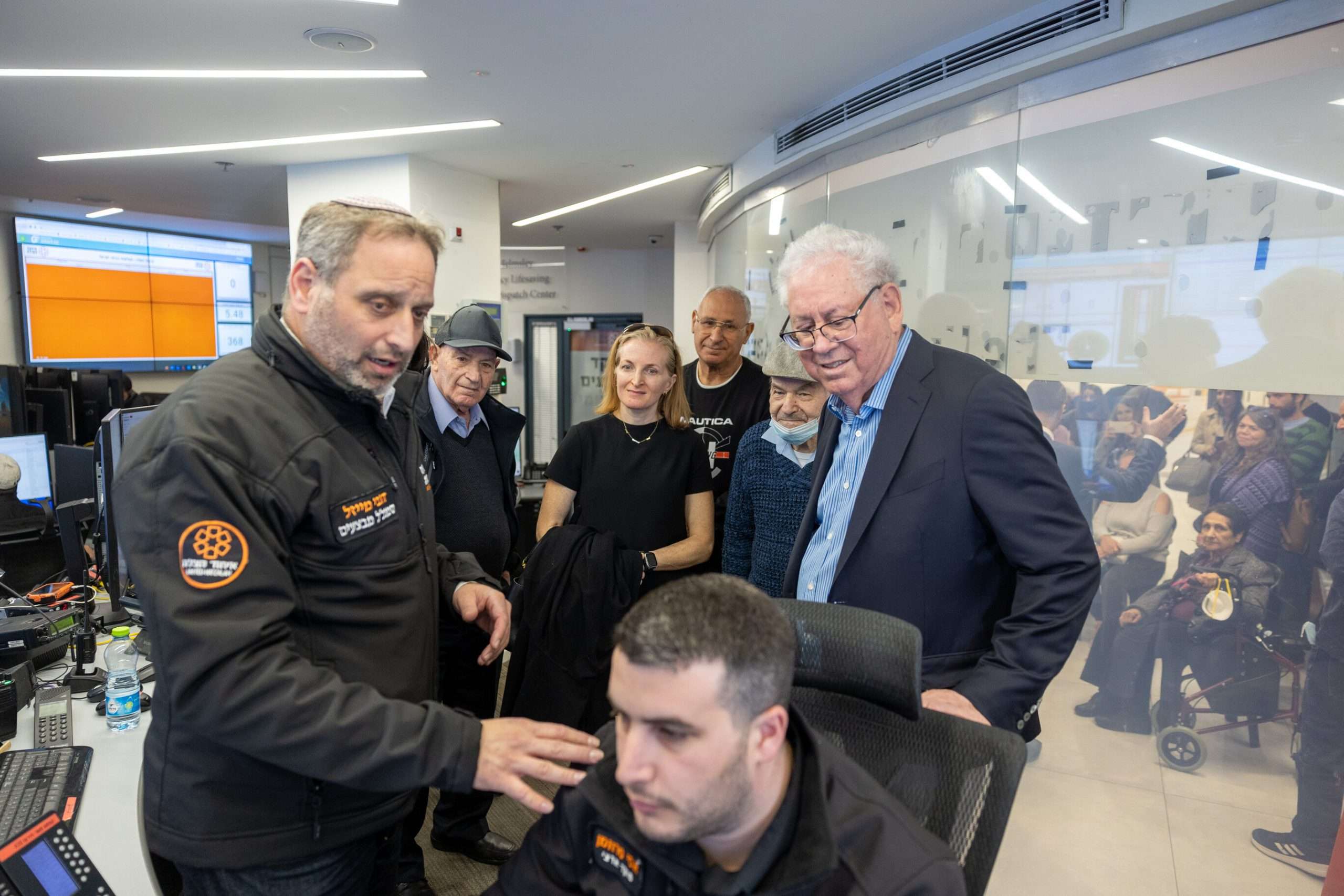 George arrives in Israel to meet his new-old family

George Weiss, Robert’s son and Suzanne’s uncle, was excited by the sensational discovery and came to Israel to meet his new family. “Every time I tried to come and see them, Israel’s borders were closed due to the coronavirus. So now that the borders were finally opened I jumped at the opportunity. It is an incredible experience to find a family,” he shared during the exciting family reunion. “We all thought we were all alone in the world, so it has been incredible to find out that we are not.”

George’s visit to Israel, which took place last month, was an incredible family event. The family decided to prepare another surprise – a joint Bar Mitzvah event for Walter, Oscar and George. Walter and Oscar did not even think of celebrating their Bar Mitzvah during and after the war. “We just wanted to get out of the war,” Walter said during the celebration. “They didn’t do Bar Mitzvahs then as people were in hiding. We were in orphanages, without parents.”

“It feels a little unusual,” Oscar said just before ascending to the Torah. His brother, Walter, expressed the same sentiment: “It’s exciting, there’s nothing else to say, it’s very exciting.”

Although George had already celebrated a Bar Mitzvah as a teenager in the United States, the family decided to celebrate it once more, this time with Walter and Oscar. “It’s an unbelievable experience, but to see my cousins here with a smile on their face, because in the Holocaust they did not have a chance to have this celebration. It gives me incredible satisfaction,” he said excitedly. “It’s the whole world for me.”

Even before he found out about his extended family, George felt a great closeness to Israel. He has donated to a variety of organizations, and over the years, has become one of the most prominent contributors to United Hatzalah. During his visit to Israel, the family inaugurated a floor of United Hatzalah’s main headquarters building that had been donated by George and his wife Lydia. George chose to dedicate the floor in the building in honor of the family story and in honor of Walter and Oscar.

President and Founder of United Hatzalah, Eli Beer, attended the Bar Mitzvah at the Western Wall and led the ceremony. Immediately after the ceremony, he approached George, kissed him, and thanked him for his generous donation. “I want to thank you for everything you have done for United Hatzalah for so many years, for supporting Israel, and for supporting our life-saving efforts now, during your life-changing reunion. It’s unbelievable that this is the first time that you are with your whole family and that you have chosen to share it with us. We are incredibly appreciative, and I must say how joyous and beautiful this occasion truly is.”

“We have no words to express our appreciation for Suzanne. For 25 years, she has been working hard, turning over every stone,” Edmund added. “She went to Europe and asked around, uncovered all sorts of documents, whether at Yad Vashem or in Europe. At the end of the day, it all started from a small box of pictures her grandfather Robert left her and her tireless effort brought this family together. Suddenly, our family is not two people, it fills up half a coach bus. It’s amazing.”