Breaking mental boundaries is a daily mission for us. Situated in the Middle East amidst hostile neighbors, Israel’s borders are still clearly defined. In Europe today, the boundaries between countries have become increasingly blurred. Everything is open, because there seem to be no more enemies in Europe. In the EU, borders are not demarcated by fences, but simply by signs or even only in one’s GPS app. In Israel it is different, fences surround the small Promised Land in the north, east and south. 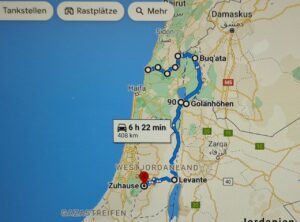 So we – Anat and I – decided to go on a trip to Israel’s northern and eastern borders. We drove past Lebanon, Syria and Jordan in one day. It was a test of both our mental limits and our ability to be in the car. Fortunately, the country is relatively tiny.

We set off early in the morning. At 10 o’clock we had breakfast in Akko. Then we went north via Kabri to the border village of Shlomi on the road 899. There we turned and drove east on Israel’s northernmost road 8993 along the Lebanese border. Almost 130 kilometers from Rosh Ha’Nikra in the west to Kibbutz Kefar Giladi south of Metulla. A beautiful and lonely country road. Everything is blooming and green in Northern Galilee. Here and there, we were surprised to see deer not far from the road. The international border fence was only a few meters to our left. Behind the fence we could see the Lebanese in their fields. Here and there yellow Hezbollah flags. But no traffic jams, everything was relaxed and idyllic.

It was quieter on the Lebanese border than in the turbulent center of the country. Many places brought back memories from our army days. We remembered hitchhiking home from this area over the weekend. Back then, in the 1980s, we served on the border or in Lebanon itself. Blue sky and sun made everything more peaceful. After two hours we were in the valley in the area of Kiryat Shmona. From the car window, our neighboring country of Lebanon looks pretty peaceful. No bombs. The only thing that bombarded us in these moments were the endless emails and reactions to my recent article “Now Let’s Be Honest.”

We continued along Highway 99 on the Lebanese border near Dafna, Tel Dan, Snir and up to the Banias waterfalls on the Golan Heights. We had lunch on the way. Next to us flowed the Hazbani River, which comes down from Lebanon into Israel and the Jordan River. On the Golan Heights we chose Highway 98, close to the Syrian border via Kibbutz Merom Golan and Kibbutz Ein Sivan on down to the triangle near Hamat Gader, where Israel, Syria and Jordan meet.

On the left, blood-soaked Syria accompanied us for 80 kilometers. Ten years of civil war, over 500,000 deaths. Behind the fence people live in fear, while just meters away here in Israel, freedom reigns. Thousands of seriously injured Syrians have been treated on our side of the fence. Almost as a subconscious reaction, we look at people on the other side of this fence suspiciously. But I think the Syrians look at us the same way. We pondered all this and talked endlessly as we continued south.

On the way we met a group of Israeli soldiers.

On the southern Golan Heights, we bought the best beef in the area from Gilli’s in Moshav Nov. All ready for next week’s Passover evening. The Golan Heights are always a tad greener at this time of year and the water reservoirs are almost overflowing. The gray volcanic stone peeks out everywhere. This is the Golan, the biblical Bashan. A wild country. Mount Hermon follows us from behind and gets smaller and smaller the further we drive south. It is not for nothing that this mountain is called the “eyes of Israel.” We love the Golan Heights. This strategic plateau above the Sea of ​​Galilee reflects something gigantic, mysterious and quaint. We got to know this area very well when we were soldiers, especially in training and during maneuvers.

At about half-past-four in the afternoon we reached the southern shore of the Sea of ​​Galilee and at dusk we drove down the bright green Jordan Valley toward Jericho. Over 100 kilometers of vibrant green blowing in the evening breeze like silk. But after Beit She’an everything slowly got more dry. On our right side the sun gradually disappeared behind the mountains, and on our left the greenhouses on the Jordanian fields on the eastern bank of the river shone in the glimmer of the last rays of light. Here, too, a fence separates people. The Jordan Basin is most beautiful when the moon is full. Past Jericho we went up west via Jerusalem to our moshav.

We got home a little after seven in the evening. 450 kilometers, nine hours on the road, three borders and one conclusion: borders are part of life! Not to hurt others, but to protect yourself. This is true both physically and mentally.