For the third time in less than two years, Israel has a new prime minister.

When Benjamin Netanyahu was unseated following the 2021 election, Naftali Bennett took on the coveted role, despite his own Yamina party controlling just six seats in Knesset at the time.

Bennett’s partner in the unity coalition, Yair Lapid, was always slated to take the reins midway through the current government’s four-year term.

But, as widely predicted, the government didn’t last nearly that long. In keeping with other terms of the coalition agreements, Bennett stepped down following the dissolution of the 24th Knesset on Thursday, and Lapid was officially named the new prime minister for an interim period until new elections are held on November 1.

Who is Yair Lapid?

Lapid is the son of noted Holocaust survivor Tommy Lapid, who himself had a long career in Israeli politics, usually as an outspoken opponent of the ultra-Orthodox agenda.

Prior to entering politics himself, Yair was one of Israel’s most popular television talk show hosts, and before that had a successful career in journalism.

In early 2012, just ahead of yet another expected early election, Lapid announced he was leaving television and entering politics. He registered the new party Yesh Atid – “There is a future” – and positioned himself as a political centrist.

For most of his time in Knesset, Lapid and Yesh Atid have been in the opposition. But he did sit in one Netanyahu-led government in which he served as Minister of Finance from 2013-2014. 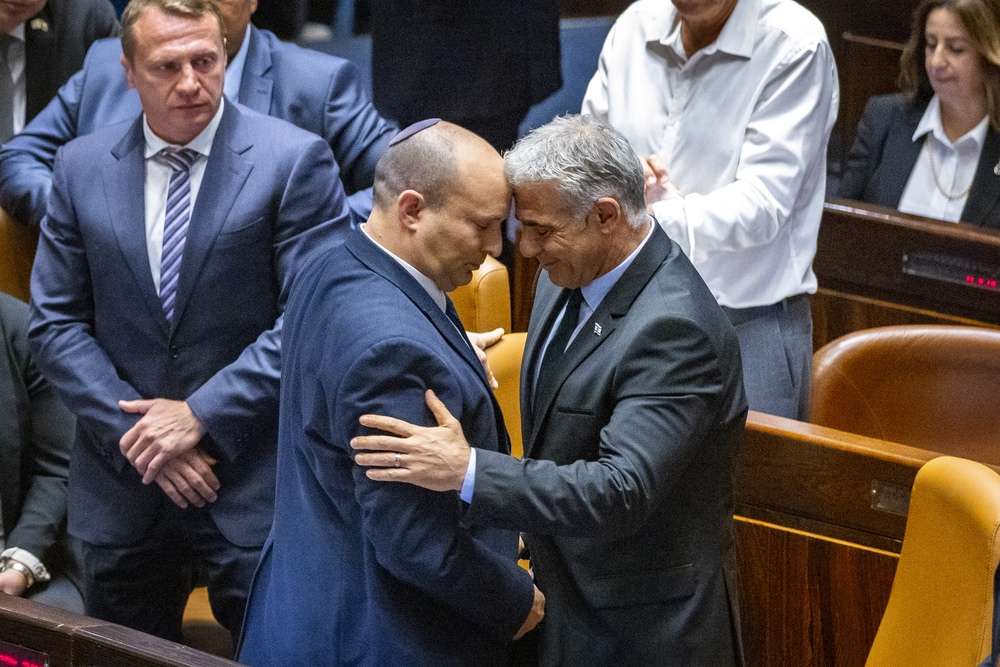 Bennett officially hands over the government to Lapid. Despite their deep ideological differences, the two lawmakers have a long and warm working relationship, and are often referred to in the Israeli media as “the brothers.” Photo: Flash90

Where does he stand?

In broad strokes, these are Lapid’s positions on issues that matter to our readers:

Lapid has stated in the past that he doesn’t view the current Palestinian leadership as a viable partner, but that he also opposes “occupying” another people.

He believes Israel should “separate” from the Palestinians, presumably by uprooting more Jewish settlements in Judea and Samaria.

Lapid saw the previous Iran nuclear deal brokered under former US President Barack Obama as the least bad of many bad options.

But just this week he firmly condemned European efforts to continue negotiations with the aim of concluding a new, weaker nuclear deal in light of Iran’s gross violations.

While not anti-religious like his father, Lapid is strongly opposed to what he sees as religious coercion in Israel by the Rabbinate and the ultra-Orthodox political parties.

He opposed the so-called “Nation-State Law” that enshrined the Jewish character of Israel in semi-constitutional Basic Law, labeling it a political assault on Israel’s religious and ethnic minorities.

Interestingly, on these major political matters, Lapid and Bennett only fully agreed on the Iran nuclear threat.

Bennett, a religious nationalist, believes it is Israel’s divine mandate to settle Judea and Samaria, the biblical heartland of the Jewish nation. In 2017, Bennett positioned himself even further to the right than Netanyahu by demanding that Israel immediately impose its sovereignty on the so-called “West Bank.”

He also voted in favor of the Nation-State Law and ideologically backs the characterization of Israel as a Jewish state. However, he did belatedly raise concerns over the wording of the law and its perceived marginalization of loyal minorities like the Druze.

Chances in the next election

Polls currently have Lapid’s Yesh Atid party winning 19 seats in the next Knesset, putting it well behind Netanyahu’s Likud, which is forecast to win at least 34 seats.

However, Netanyahu still doesn’t have the support of enough lawmakers on the Right to establish a majority coalition. This could again give Lapid an opportunity to form a mixed anti-Netanyahu coalition, though it would probably survive for an even shorter duration than the current one.

Also of interest to our readers will be the fact that Lapid’s sister-in-law, who he briefly appointed to the board of the Jewish National Fund, is a Messianic Jewish believer.