There has been much comment on the unprecedented divisions in our society we have witnessed of late – particularly in America over the recent elections and in Britain with both Brexit and Covid.

So what is behind all this? Well, the Bible holds the answer, spelt out by the prophet Joel in the verses immediately following the well-known passage on the outpouring of the Holy Spirit, (Joel 2:28-32 – initially fulfilled on the Day of Pentecost but also applying, I believe, to the troubled last days in which we are living).

Joel then writes: “In those days and at that time, when I restore the fortunes of Judah and Jerusalem, I will gather all nations and bring them down to the Valley of Jehoshaphat. There I will put them on trial for what they did to my inheritance, my people Israel, because they scattered my people among the nations and divided up my land.” (Joel 3:1f)

What that means, in effect, is that the nations responsible for promoting the so-called ‘two-state solution’ to the Middle East conflict are on a collision course with God who has clearly, and repeatedly, stated that the land of Israel is his – and he has given it to them because they are his special inheritance.

Questions around to whom this much-coveted territory belongs is thus a litmus test for whether nations are for or against God and his purposes. There are other factors causing divisions, of course, but this one is crucial.

After years of stalemate on this issue, the outgoing President Trump, for all his apparent flaws, has dramatically turned things around in Israel’s favour, backing the biblical position against a turbulent anti-Semitic tide. But his action has been met with a gigantic backlash as the hordes of hell have risen up in fury against God’s plans, effectively aligning themselves with those who would dispossess Israel of their rightful land. It is this, I believe, along with the issue of abortion laws which Mr Trump had pledged to reverse, that has exposed the deep divisions in American society, with many shaking their fists at the God of heaven who is in ultimate control.

But what about Britain? Ever since the pundits were struck dumb by the surprise result of the 2016 referendum, Britain has been dangerously divided by Brexit with sections of the media and even former Prime Ministers defying democracy by suggesting it was all a terrible mistake.

Even a thumping majority for Boris Johnson failed to calm the storm and now, amidst a potential financial collapse around Covid, unseemly squabbles have broken out amongst No 10 staff.

As far as Israel is concerned, Britain was given the inestimable privilege of paving the way for Jewish restoration to their ancient homeland. After promising to do all in our power to achieve this, we were handed the international Mandate to carry it out following the signing of the San Remo Treaty in 1920. But we subsequently betrayed the Jewish people by favouring Arab aspirations instead and preventing Jews fleeing the Nazi Holocaust from entering the land long promised by God, which we were meant to be preparing for Israeli sovereignty.

We have tragically pursued an anti-Semitic policy centred on dividing the land ever since. For the ‘two-state solution’ involves handing what Jews regard as the heartland of Israel – the mountainous country of Judea and Samaria – to the Palestinians, which was never part of San Remo or any of the international agreements made at the time.

More to the point, it amounts to dividing the land. But then Ezekiel prophesied this would happen. Israel’s enemies would say, “Aha! The ancient heights have become our possession.” (Ezek 36:2) But it wouldn’t stop Jews coming back to their “own land” (Ezek 36:24) and rebuilding the ancient ruins.

Even now, the UK continues to vote in favour of anti-Israel resolutions at the United Nations, including one that referred to the Temple Mount by its Muslim name. 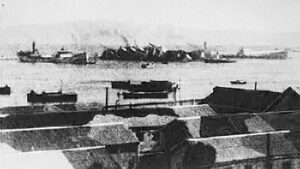 The sinking of the Patria in the port of Haifa in 1940.

Next week, on November 25th, is the 80th anniversary of the sinking of The Patria in Haifa harbour with the loss of 200 Jewish refugees and 50 British soldiers and crew members. This disaster was part of a litany of the tragic effects of British policies at the time which severely restricted immigration of those desperately trying to escape Nazi Europe – even though this was the very land supposedly being prepared for them to live in!

So when three ships arrived in Haifa in November 1940, they were diverted to the Indian Ocean island of Mauritius, where the refugees would be held in appalling conditions – the men holed up in an old prison, separated from the women and children housed in corrugated iron sheds. Tragically, the Jewish underground sought to disable The Patria in order to prevent it sailing, but the bomb they placed blew a large hole in the ship’s side and she sank very quickly. 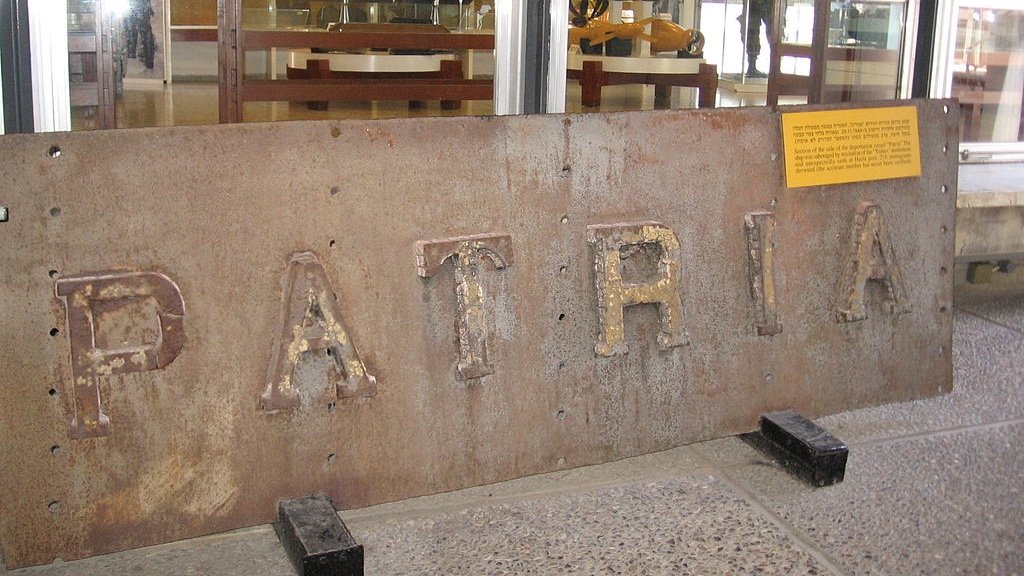 The Patria nameplate preserved at the naval museum in Haifa.

It is surely high time the British government made a formal apology, not only for this shameful incident, but also for its ongoing betrayal of the sacred trust it was granted to be a blessing to the seed of Abraham, God’s chosen people (Gen 12:3).

A zoom webinar to mark the occasion will be held on November 29th at 2.30pm UK time (4.30 in Israel). Click here if you would like to register to join