The Messianic Jewish congregation Beit Hallel in the port city of Ashdod is no stranger to religious opposition emanating from the local ultra-Orthodox Jewish community. But in recent weeks the harassment has reached fever pitch after rabbis issued a joint statement urging action against what they called “missionary activity.” 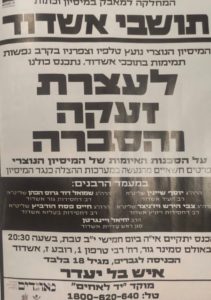 The statement was signed by the chief rabbi of Ashdod, the city’s deputy mayor, and a number of prominent local rabbis, who referred to Beit Hallel as a “Christian mission.”

According to these and many other ultra-Orthodox rabbis, the presence of Jews who believe in Yeshua (Jesus) as the promised Messiah is a spiritual threat to nation of Israel.

The result was that for several weeks in a row, a large crowd of ultra-Orthodox men gathered outside Beit Hallel to disrupt services and even block congregants from entering the premises.

While this harassment won’t necessarily be a problem in the coming weeks, as it is presently against the law to hold any gathering of over 10 people due to the coronavirus, it is certain to resume in force after the pandemic has ended.

Israel Today spoke with Beit Hallel’s senior pastor, Israel Pochtar, who gave us permission to reprint portions of a detailed prayer request sent out to other Messianic congregations in Israel.

In that letter, Pastor Pochtar said that the intensifying of ultra-Orthodox opposition was likely in response to the growth of Beit Hallel (which now has over 300 congregants) and its “active evangelism work. We are very much involved in spreading the gospel of Yeshua, whether through our congregational work, or different projects and ministry work.”

Pochtar added that he has turned to the Police on numerous occasions, only to have his complaints dismissed. “The Police have washed their hands of this issue, and in some cases even taken the side of the ultra-Orthodox, despite them breaking the law,” wrote the pastor. “The local police chief has even notified us that our complaints are futile, and that it was decided not to intervene in this matter.”

“In my opinion, there is no disruption of the peace, nor is this a life-threatening situation,” Pochtar quoted the Ashdod Chief of Police as telling him.

While that might technically be true, Pochtar cautioned that this approach by the authorities has only emboldened the ultra-Orthodox antagonists.