Theories are spreading around town trying to determine who the red-cloaked Santa riding a camel into the Holy City could be. 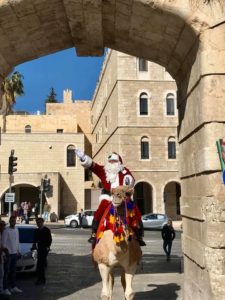 Some say Santa came too early to Jerusalem this year, before the Jerusalem snows, so he had to jump on a camel because his sleigh wouldn’t budge on the dry streets.

Others think this is Elijah the Prophet, who has come back riding on a camel to proclaim the return of the Messiah.

One guy said that Santa came down to Bethlehem, but the Israeli security forces told him that the situation was too dangerous to fly his sleigh into Jerusalem, so he borrowed a camel.

Still others say a local Bedouin had to put on some warm clothes due to the cold and rainy weather that hit Israel in recent days, and the red suit and warm hat was all he could find.

Whatever the truth, with Christmas so close, it appears that a particularly strong wave of “Jerusalem Syndrome” has already begun to infect people around the city.