(JNS) Palestinian Media Watch has examined the broadcasts on official Palestinian Authority TV and Al Jazeera prior to and during the May 13 funeral of Al Jazeera journalist Shireen Abu Akleh, who was killed on May 11 in a firefight between Palestinian terrorists and Israeli soldiers. This examination confirms the Israeli version of the events that led to the violence. Videos of Israeli police who hit some of those who carried the coffin on their shoulders were disseminated around the world to make it seem as if the Israel Police interfered with the funeral. In fact, the exact opposite was the case. It was a Palestinian mob that hijacked the funeral and Israeli police were forced to intervene and ensure the funeral was held as Akleh’s family had planned.

The morning of the funeral, Shireen Abu Akleh’s brother, Anton Abu Akleh, told Al Jazeera that the family, who are Christians, wanted the coffin to be taken by hearse at 2:00 pm from the hospital to the Greek Catholic Church in the Old City of Jerusalem. They did not want it to be carried by pallbearers in a procession on foot.

At 2:00 pm, Allah willing, the body will set out from the French Hospital on Highway 1 (i.e., by hearse) to the Jaffa Gate, to the Greek Catholic Church next to the Jaffa Gate. There the burial prayer will be held for her soul. Afterwards we will set out from the church by foot to the [Mount] Zion Cemetery of the Greek Catholic Church.

The brother was asked about those who wanted to carry the coffin on their shoulders:

The young people of Jerusalem want to hold a special funeral for Shireen that will go [by foot] through the Old City. What do you think of this as a family?

Anton Abu Akleh rejected the idea so as to prevent disorder:

The situation, as you see, is that the Israeli restrictions are very strict. We appreciate the love of the Palestinian public and the Palestinian people. As for Shireen, we have held a number of funerals for her. The Palestinians held [a funeral] for her from Jenin to Nablus, to Ramallah, and now in Jerusalem we don’t want there to be [confrontations]. In other words, the Israelis are lying in wait for us, and Allah willing the funeral will go well.

However, when the church’s hearse approached the hospital to receive the coffin, the Palestinian mob at the hospital stopped the hearse. 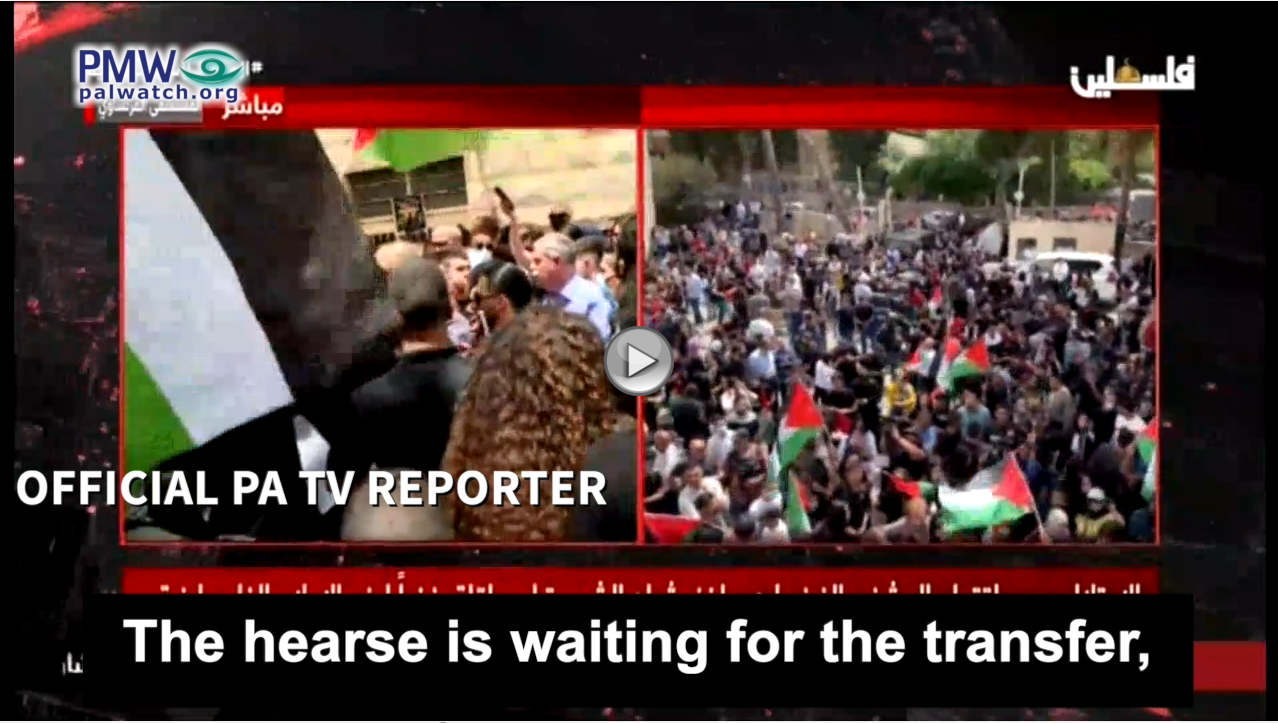 A PA TV reporter said of the delay:

The hearse is waiting for the transfer, but dozens of those who managed to get here refuse to let it go.

One PA official, Ahmed Al-Safadi, a member of the National Action Committee in Jerusalem, explained:

The [Arab] residents of Jerusalem want Shireen Abu Akleh to be carried out of respect, as she was carried [on shoulders] in Jenin, Nablus and Ramallah.

He added that he supported a compromise solution:

There are suggestions that she will be taken in a hearse slowly beside the young men and women of Jerusalem. I think this is a good suggestion, that half of [the procession] should be by car and half by foot, so that all parties are satisfied.

Finally, the hearse tried to slowly approach the hospital through the crowd, but the mob repeatedly banged on it and prevented it from reaching the entrance. The hearse was forced to leave. It was the mob and not Israel that prevented the burial from taking place as planned. 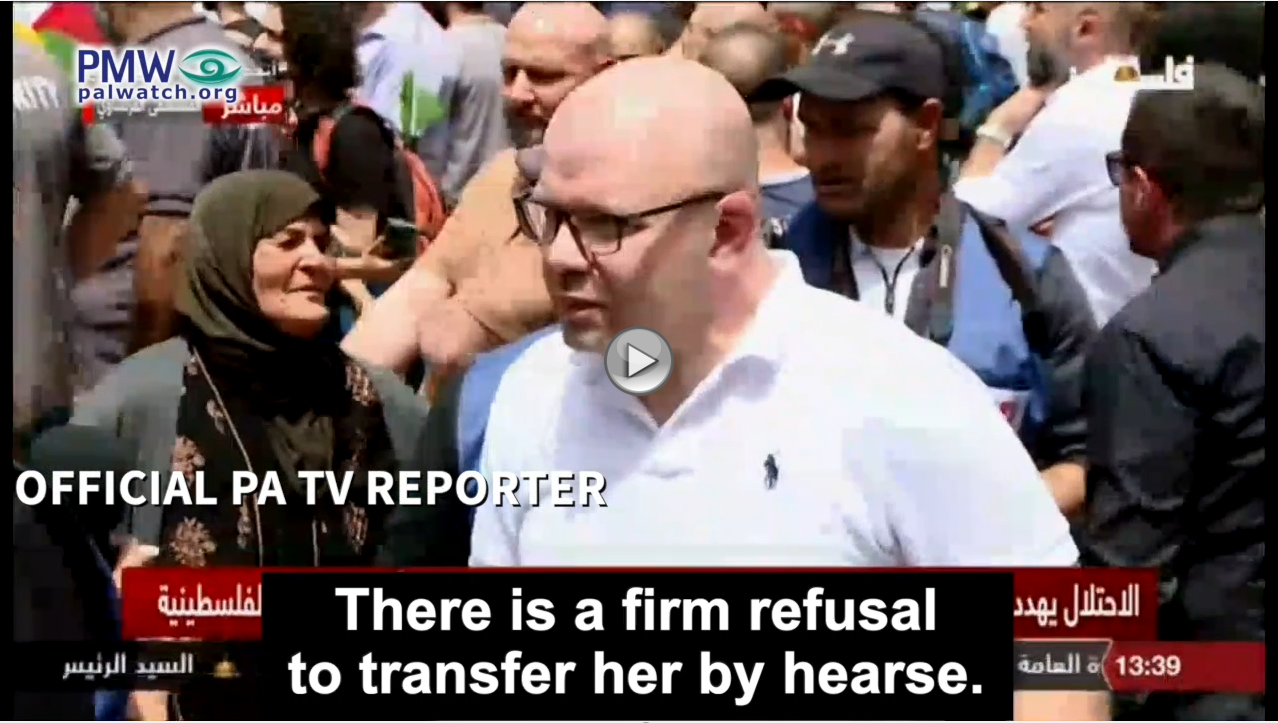 There is a firm refusal to transfer her by hearse. The hearse was [forced] away a short time ago, and it was prevented from transferring her.

Amjad Abu Asbeh, head of the Prisoners’ Families Committee in Jerusalem, explained that the mob’s insistence on carrying the coffin on their shoulders was so that it wouldn’t seem to be a Christian funeral with a “church car” as had been planned. They didn’t want “to spin the issue as if a Christian woman died.” Instead, they wanted to carry her body on their shoulders—as is Palestinian custom for shahids, the Islamic term for “martyrs,” even though she was a Christian:

There is general agreement here that they want to carry her on their shoulders. … There is fear that the procession will be prevented, that they will take the body and put it in the church car. But the [people] refuse to spin the issue as if a Christian woman died. This is a daughter of the Palestinian people, a daughter of the Arab nation. 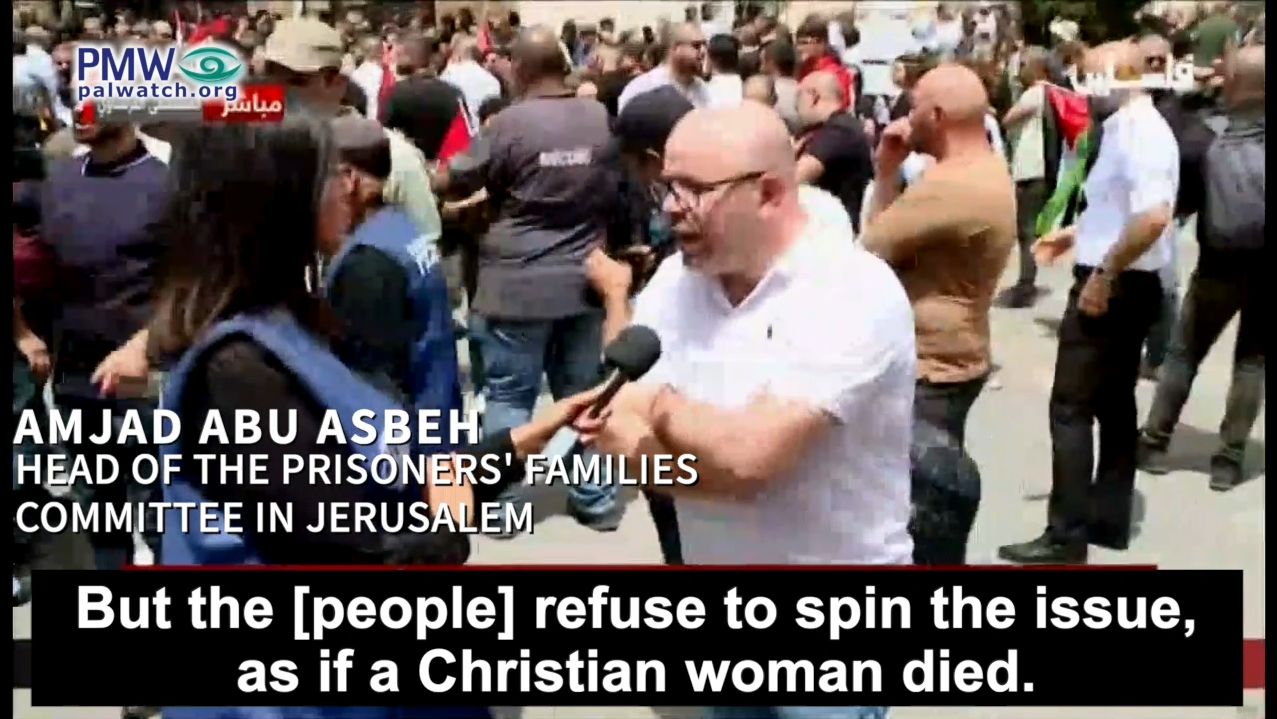 After the mob prevented the hearse from arriving, the coffin was taken without authorization and carried on foot, against the family’s wishes. Israeli police were forced to stop this and return the body to the hospital. Shortly after, the hearse returned under Israeli protection and the coffin was placed inside to be taken to the church. The hearse left and later arrived at the church with the body.

It is clear from all this that it was the Palestinian mob that prevented Abu Akleh’s funeral from progressing to the church by hearse as the family wanted. It was the mob that took the body without authorization, which forced Israeli police to intervene and return the body to the hospital by force. Once returned, the body was transported to the church in a hearse under Israeli protection according to plan.

Itamar Marcus is the founder and director of Palestinian Media Watch.

This article was originally published by Palestinian Media Watch.