UPDATE: It was reported overnight that the Palestinian Authority had decided to release Pastor Johnny Shahwan after holding him in jail for over 40 days for the crime of meeting with a Jewish rabbi. Read on to better understand why Pastor Shahwan was arrested and what it says about Palestinian treatment of Christians.

Pastor Johnny Shahwan, a Palestinian Christian from Beit Jala in the Bethlehem area, was apprehended by Palestinian Authority (PA) police after it was discovered that Rabbi Yehuda Glick paid a visit to his church together with a group of German tourists.

The troubles began when Rabbi Glick posted a selfie together with Pastor Shahwan on his Facebook page. Glick was gushing over the return of tourists to the Land and posted the photograph overjoyed, as was the pastor, that German tourists have returned to Israel and were taking time out on their tour to visit the church and learn about the Christian ministry in the Bethlehem region.

That picture of the Palestinian pastor meeting with a Jewish rabbi was enough to outrage local gunmen to fire several shots at the Christian center in protest. No one was hurt, but on the next day Palestinian Authority police arrested Pastor Shahwan after they accused him of promoting normalization with the “Zionist entity” and welcoming an “extremist Zionist settler” into the center in Beit Jala, an Evangelical Church facility called Beit Al-Liqa, the House of Encounter.

Beit Al-Liqa, which hosts a childcare center, guest house and other Christian activities, immediately released a statement after the arrest claiming that Shahwan and the other Palestinian Christians were not aware of Glick’s identity when they opened the center’s doors to him. According to Khaled Abu Toameh, an Arab Israeli journalist who covered the story for Gatestone Institute, that statement was a lame attempt to appease the Palestinian Authority by saying that Glick had sneaked into the center with a group of visitors:

“Beit Al-Liqa hosted a group of German tourists… At the end of the meeting with Pastor Johnny Shahwan, an unidentified person [Glick] suddenly walked in and asked to take a ‘selfie’ with Shahwan and the tourists. We were not aware of the presence of this extremist Zionist person, and he was not part of the group’s itinerary.”

Toameh, an award winning journalist from Jerusalem, said that in their attempt to placate the Islamists who condemned Shahwan and his community, Beit Al-Liqa put out a statement saying that it “affirms our commitment as a Palestinian national Christian institution to all Palestinians and opposition to normalization [with Israel].” See below the entire statement, which goes on to denounce all Jews living in the West Bank as “criminals.”

Despite the strongly worded text, and the claim that the organizers were not aware of Glick’s identity, the PA leadership quickly dispatched a large police force to arrest Shahwan. The center was shut down pending an investigation into the circumstances surrounding the presence of Glick at Beit Al-Liqa.

As of yesterday, Shahwan is still in prison, Toameh told Israel Today, and is now facing trial on charges of “undermining the national sentiments [of Palestinians], stirring up sectarian strife and insulting the prestige of the [non-existent Palestinian] State.” If convicted, he could face a lengthy term in prison with hard labor.

Appeals by heads of the Christian community in Bethlehem for the release of Shahwan from prison have been completely ignored by the PA leadership, which appears afraid of a backlash from Islamists and other radical groups if it dares release the pastor. The appeals have also been ignored by many journalists who chose to focus on stories that reflect negatively on Israel.

“Can you imagine what the mainstream media would say if Israeli police has arrested a Muslim cleric? There would be an uproar,” Toameh said. “But you are not going to see mainstream media covering this kind of story.”

“And where is Germany in all of this,” Toameh added with astonishment. “From what I understand Johnny has German citizenship together with his wife. So where is the German government? Or the media? Why are they not speaking up about the imprisonment of one of their citizens? A man who does nothing but meet and greet a rabbi together with a group of German Christian tourists? Where is Germany’s role in this? It might help him to write about this to your German readers,” the journalist told Israel Today.

Getting the story out

Israel Today also reached out to Messianic Jewish leaders in Israel who know Shahwan to find out if they were doing anything to help the pastor get out of prison. But none were willing to comment, saying that it is detrimental to Johnny for them to speak about this story in the media. All Arab News, however, founded by Joel Rosenberg, did report on this story.

Toameh disagrees that getting this story out endangers the pastor. “There are important lessons this arrest sends to Christians,” he said, enumerating:

Why don’t believers (Christians & Messianic Jews) here in Israel want to speak up about this?

“I don’t know. If a Christian pastor was being held by Israel I am sure there would be an uproar,” Toameh, who has been reporting on Palestinian issues for over 20 years, told Israel Today in a phone conversation from Jerusalem.

“People wrote to me and said that Glick is a dangerous man,” Toameh said. “He goes on the Temple Mount. I said OK, but how does that justify throwing this pastor in prison. You can think whatever you want about Yehuda Glick, but he is not a terrorist. This is no justification for holding this man [Shahwan]. He has done absolutely nothing wrong except welcome a Jewish rabbi into his church.” 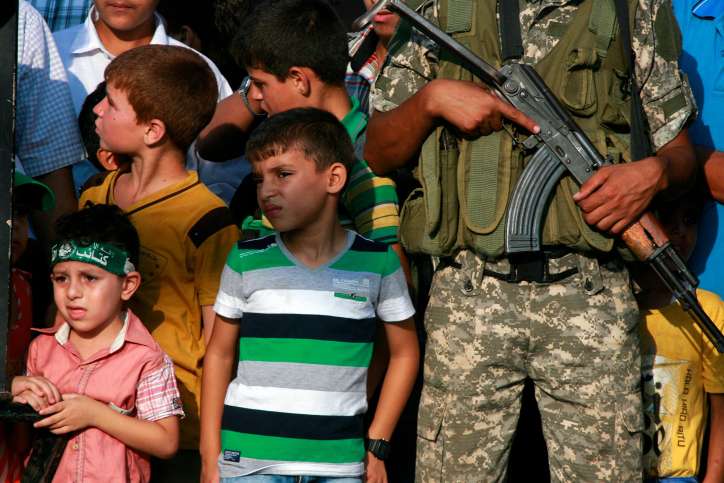 What are Palestinians teaching their kids about Israel and the Jews? Nothing good, that’s for sure. Abed Rahim Khatib/Flash90

Israel Today contacted Rabbi Glick for a statement on what happened in the church, but as of this publication he has not responded. Toameh said that it is probably because any more involvement by the rabbi will surely make it more difficult for the pastor.

“Given the widespread campaign of incitement against Shahwan on social media,” Toameh added, “it would probably be safer for him to remain in a Palestinian prison than to be released to his home in the Bethlehem area. There, he could be attacked by the extremists who consider him a traitor for meeting with an Israeli Jew.”

“This is not good for the PA,” Toameh pointed out. “It looks like they are cracking down on Christians. And this man didn’t do anything. He didn’t commit a crime. He was actually helping the Palestinians. Helping Christians and Muslims alike. Bringing tourists to the land. What kind of crime is this?”

No friend of Israel

It was recently been reported that PA President Mahmoud Abbas has been made aware of the pastor’s arrest. Israel Today will continue to report on this developing story to help release Pastor Johnny Shahwan from the PA prison.

However, it should be pointed out to our Israel Today readers that the Beit Al-Liqa center directed by Pastor Shahwan is no friend of Israel.

In hopes of appeasing the PA authorities after the Christian center was shut down, Beit Al-Liqa made a public statement insisting that they had no knowledge of “this extremist Zionist” [Rabbi Glick] who they claim “exploited his entry into the meeting hall for his own dubious purposes.” For more on Glick’s attitude towards Palestinians see: Peace Begins with a Hug.

Pastor Shahwan’s Evangelical Christian center went on to say in their statement about the rabbi’s visit to the church that:

“First: We strongly condemn and strictly condemn all acts and attitudes of the criminal settlers, especially those associated with this extremist, which we emphasize that we do not know and have nothing to do with, neither from afar nor near.

“Secondly: We reaffirm our commitment as a Palestinian nationalist Christian institution to all standards of civil society and its anti-normalization [with Israeli] institutions.

“Thirdly: We invite all members of the Palestinian community in its political, social and religious institutions, to kindly visit us at the House of Al-Waqa establishment and listen to us before taking any stance.

“Fourth: In the House of Assembly [here they try to disassociate from Christianity. The facility is actually a church] we held a large number of lectures and seminars against Zionist thought, and we hosted a book and intellectuals who published books against Zionism and Zionist Christian thought. We will follow such activities to expose any thought hostile to our Palestinian people.”

We leave it to you our readers in Germany and around the world to consider how best to respond to this incident.