At the end of October 1994, I was in Eilat for a short vacation. There was a lot of activity in the resort town, which was flooded with journalists, including several of my former colleagues from Israeli television, who were by chance staying at the same hotel. Everyone was in town to witness and report on the signing of the historic peace treaty between Israel and Jordan. The ceremony was scheduled for the next day in the Aravah Valley, just north of Eilat.

I felt close to a genuinely historic event. Jordan would be only the second Arab country after Egypt to make peace with Israel. It was an almost euphoric atmosphere. I began already to dream of day trips to Amman. Finally, we’d be able to drive by car from Israel to another country.

But today, exactly 25 years after the signing of that treaty, there remains little but a very cold peace. There had been such promise. Relations between then-Israeli Prime Minister Yitzhak Rabin and the late-King Hussein of Jordan were warm. And this friendly relationship even survived the terrible murder of seven Israeli school children by a Jordanian soldier while they were visiting the so-called “Island of Peace.” King Hussein personally visited the homes of the victims to console and apologize to the bereaved parents. It was a gesture that, the circumstances notwithstanding, earned him high praise in Israel. 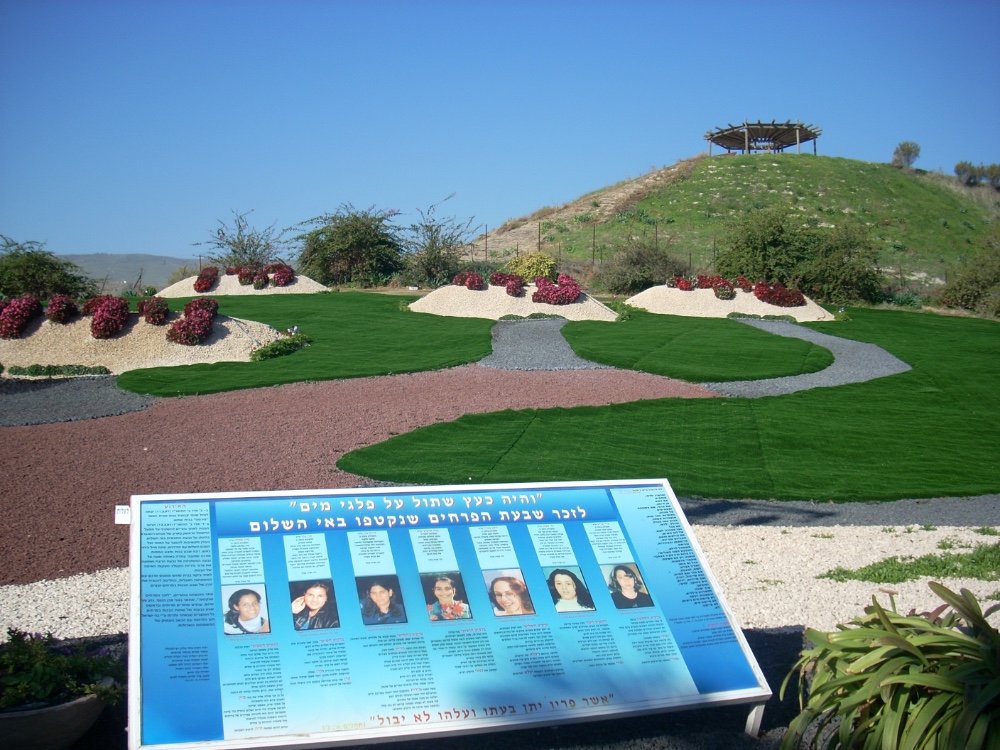 Memorial to the victims of the “Island of Peace” massacre

But today, as noted, hardly any of those earlier hopes remain, and the numerous plans of bilateral cooperation have been stalled, if not scrapped altogether. There was to be a joint water channel connecting the Dead Sea to the Red Sea, a common airport shared by Eilat and the Jordanian resort of Aqaba, and many more such endeavors.

The area around the “Island of Peace,” known in Hebrew as Naharahim, has since before the founding of the State of Israel been worked by Jewish farmers. But control of this parcel of land was considered controversial, and the 1994 peace treaty determined that it legally belonged to Jordan. However, the terms stipulated that the Israelis could lease the agricultural fields for 25 years, with an automatic 25-year extension, barring objection from either government. Unfortunately, object is exactly what Jordan’s King Abdullah II did this year as the first half of that lease expired. The Israeli farmers have until mid-November to vacate the lands they have now been working for several generations.

The reason for this cold peace is above all attributed to stagnation in the Israeli-Palestinian peace process. For Jordanians, the so-called “Palestinian” issue is of utmost importance. As long as there is no solution, they aren’t interested in warmer ties.

The incident at the Israel Embassy in Amman in 2017, when an Israeli security guard shot dead a Jordanian worker who attacked him with a screwdriver, also contributed to the deterioration of relations between the two countries.

No matter how he may feel personally, Jordan’s current king is under too much pressure to follow through on the kind of peace his father seemed to want. And so, on the 25th anniversary of that historic signing, there was no grand celebration or diplomatic happening.

Still, a cold peace is better than no peace at all. Even so, I think I’ll continue to hold off on that day trip to Amman.