This is Part 3 in our look at American missionary efforts in the south of Israel. See Part 2

Not many Protestant missionaries who labor in a foreign country are willing to remain alone in a war zone and suffer bombings alongside austere shortage of food and water. One such person was Bernice Cox Gibson (1892-1980). She was an exceptional evangelist, full of faith, who did not fear shelling, shooting and other stressful situations.

For more than two decades (1931-1957), during a most eventful and formative period, Bernice devotedly continued to work in Eretz-Israel (Land of Israel). Her personal testimony about faith and trust in the Lord Yeshua, particularly in war times, touched many lives, both Jews and others.

Widowed Missionary among the Jews 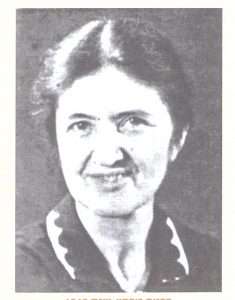 In 1931, after becoming a young widow and raising her two children, Bernice sold her family farm in America and joined the Christian and Missionary Alliance (C&MA) in the Holy Land. Initially she worked as a school teacher for the missionaries’ children in Jerusalem and in Beit-Jala near Bethlehem. However, “Aunt Bernice” specifically longed to share her personal testimony about salvation in the Lord Yeshua with the Jewish people in their ancient homeland.

In 1933 the Nazis came to power in Germany and the persecution of the Jews in the Third Reich intensified, so many of them fled to Israel. Thus, a new wave of Jewish Aliyah (immigration) to the Land had begun, named the Fifth Aliyah, mainly characterized by educated and affluent German Jews. Those German Jews soon became known by the nickname ‘Yekke’, in the sense of their being punctual, serious and accountable compare to most in Middle East culture. While these and other Jews attracted Gibson’s missionary interest, she did not ignore other groups in the land, particularly the Bedouins of the Negev.

Origins of the Negev Bedouins

Alongside Rev. and Mrs. Leigh Irish, Bernice Gibson signed a report dated November 10, 1945, published in the Alliance Weekly, the mission’s bulletin, which stated:

“We are praying and looking forward to reoccupying our frontier stations of Beersheba and Ma’an (today in the southern part of the Kingdom of Jordan), where contacts are made with the [Bedouin] tribes that crowd into these districts from central Arabia each year at harvest time.”

These unbiased words reflect the reality about the true territorial origin of the Bedouins in the Negev prior to the establishment of the State of Israel. Namely, coming from central Arabia, i.e. the regions of Saudi Arabia and south-east Jordan. They were not indigenous locals who inhabited or owned lands in the Negev for centuries, as many now claim.

Originally, the Bedouins were Arab nomads, not long-time “Palestinians,” who actually came from far away. In the Jewish State, however, they received civilian status with many material benefits, particularly, for example, through the National Insurance that provides monthly allowances for all children, even those birthed by several wives. Many Bedouins have more than one wife.

Bernice wholeheartedly believed that the modern ingathering of the Jews to the land of the Bible is a timely fulfillment of God’s promises to the seed of Abraham, Isaac and Jacob. In her eyes the contemporary Zionist endeavor to re-settle the Jews from the four corners of the earth in their homeland was part and parcel of biblical eschatological events.

Like William Blackstone, the American renowned Christian Zionist, she was convinced that a Jewish state would uniquely coincide with the soon return of Messiah Yeshua.

Bernice diligently learned the Hebrew language and eventually mastered it. She joyfully organized her visits among the Jews in both their urban centers and rural settlements. In those places she enthusiastically talked about her personal faith in Messiah Yeshua – His atonement and forgiveness of sins – and also distributed gospel literature in Hebrew.

In May 18, 1946, the Alliance Weekly published Gibson’s interesting report where she wrote the following:

“These are thrilling days to be among the Jewish colonists. The disappointment of their fervent hope for the immediate opening of their homeland by international intervention has made at least some of them more open to the suggestion that the problem is spiritual, rather than a political one, and that the solution will be found only in God and in His Messiah.”

Generally, Bernice’s evangelistic efforts were kindly received by the Jewish newcomers to the Land. She easily made personal contacts with people. Many of them were eager to learn about the source of her inner joy and peace.

During December 1947 and January 1948, the hostilities between the Palestinian Jews and the local Arabs had heavily intensified. The latter felt humiliated and depressed following the UN resolution of November 1947 to partition the land between a Jewish and an Arab state, with the internationalization of Jerusalem. Following the atrocities, the C&MA, like other missionary organizations in the country, decided to evacuate its personnel with the children to Cyprus.

Gibson, however, courageously chose to remain in Jerusalem and to take care of the mission’s spacious headquarters at 55 Street of the Prophets, also known as the American Gospel Church. Altogether, she did not feel lonesome but rather continued her work among the Jews because “Faith has replaced cynicism in many of them since the Partition.” Thus, for example, in Spring 1948 she declared: “Now is the time to ‘buy up the opportunities.'”

In those months the bombardments and curfews went on in Jerusalem, mainly after the Arab countries jointly invaded the young Republic of Israel born in May 1948. Consequently, Bernice didn’t hesitate to welcome Hebrew Christians and other neighbors to the basement of the American Gospel Church. While the explosions smashed the glass windows and the roof tiles, the solid stone walls of the building provided safe shelter.

Among those sheltered in the building was also Pastor Haim Joseph Haimoff (later he changed his family name to Bar David), who in the 1940s was the C&MA evangelist among the Jews, and his wife Shelly and three small children. Haimoff, like Gibson and alongside very few other Hebrew Christians, remained in the country. By faith, he refused to be evacuated to the UK together with dozens of Palestinian Hebrew Christians in a campaign called ‘Operation Mercy’ organized by several British organizations.

It should be noted that in those days both local Jews and Arabs were considered Palestinians, as they held Palestinian passports of British Mandatory Palestine.

Gibson’s personal testimony during the long months of warfare between the Arabs and Jews in Jerusalem were published in the Alliance Weekly. One example, dated March 6, 1948 is especially moving:

“Of course, the thought of being left alone here after the others should go was rather dreadful at first. But God has wonderfully arranged that the house will be full of dear friends, most of them Hebrew Christians, ‘displaced persons’, who need shelter and fellowship and perhaps a ‘shock absorber’ among them.” 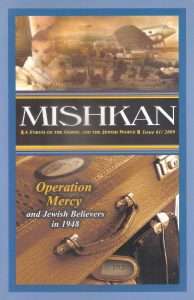 Operation Mercy saw most Messianic Jews evacuated from the country. But some refused to go. Photo: Gershon Nerel

In June 1948, a month after the State of Israel was declared, Bernice also wrote in another letter about the disturbing problem of water shortage. For more than a month the city water in domestic pipelines had been shut off and water rationing was implemented. Practically, however, Bernice pumped rain water from the building’s cistern (filled with winter rain from the roof) and willingly shared it with the neighborhood. She gave so much that herself and those staying with her were in grave danger of being left without any water for themselves.

Moreover, because the basement of the American Gospel Church was the safest spot in the vicinity, Bernice also allowed all the neighbors to use it for a shelter and the place was fully packed. In July 17, 1948 the Alliance Weekly published her following words:

“There were seventy (sic! – G.N.) people sleeping in the house for about three weeks, and with shortage of water, no electricity and little kerosene and starvation rations, we might have been pretty miserable, but it has been truly wonderful how the Lord has supplied our needs. One of the people in the house even gave me a box of Vitamin C tablets the other day!”

Bernice concluded her witness by asking for prayer that “there may be a return not only to the simplicity of apostolic days, but also to their spirit and power.”