Casual readers who do not glance beyond the headlines were sent a clear message that unprovoked Israeli police attacked peaceful Palestinian mourners at a funeral procession.

But that’s not the truth. Video documentation of the funeral demonstrates that some of the Palestinians gathered outside the hospital where Shireen Abu Akleh’s body was held prior to the funeral procession initiated the violence and attacked Israeli police.

The following video, shared by Liran Tamari, a police affairs and legal reporter for Ynet, shows Palestinians in the crowd outside the hospital as they threw rocks, glass bottles and other items at the police. In Tamari’s video, the sound of shattered glass is heard.

Watch: Violence erupts as Al Jazeera journalist #ShireenAbuAkleh’s coffin emerges from a #Jerusalem hospital ahead of her burial procession.https://t.co/Q9anriHv7Y pic.twitter.com/WZ1NcKGxUn

The articles by the two aforementioned British media outlets—Sky and The Independent—contained not one word about the Palestinian attacks on the police. The other media outlets, however, did include references to the attacks. They attributed the information to the police themselves and buried it deep in the article. The lower information appears, the less audience and exposure it gets.

Reuters, for instance, reported in its article’s eighth and ninth paragraphs:

Israeli police said a group of Palestinians outside the hospital, whom they described as rioters, had begun throwing stones at officers.

“The policemen were forced to act,” they added.

The AP, for its part, reserved its reference to the Palestinian violence for the 13th paragraph:

AFP fared somewhat better. It reported in its fifth paragraph: “Israeli authorities said six arrests were made after mourners had thrown ‘rocks and glass bottles.’” Notably, “rocks and glass bottles” appeared in scare quotes, although the information had already been attributed (“Israeli authorities said”), which constitutes a double attribution. Given that videos confirm the information, attribution to the Israeli police is not merely superfluous, but signals to readers that the information is not to be believed. 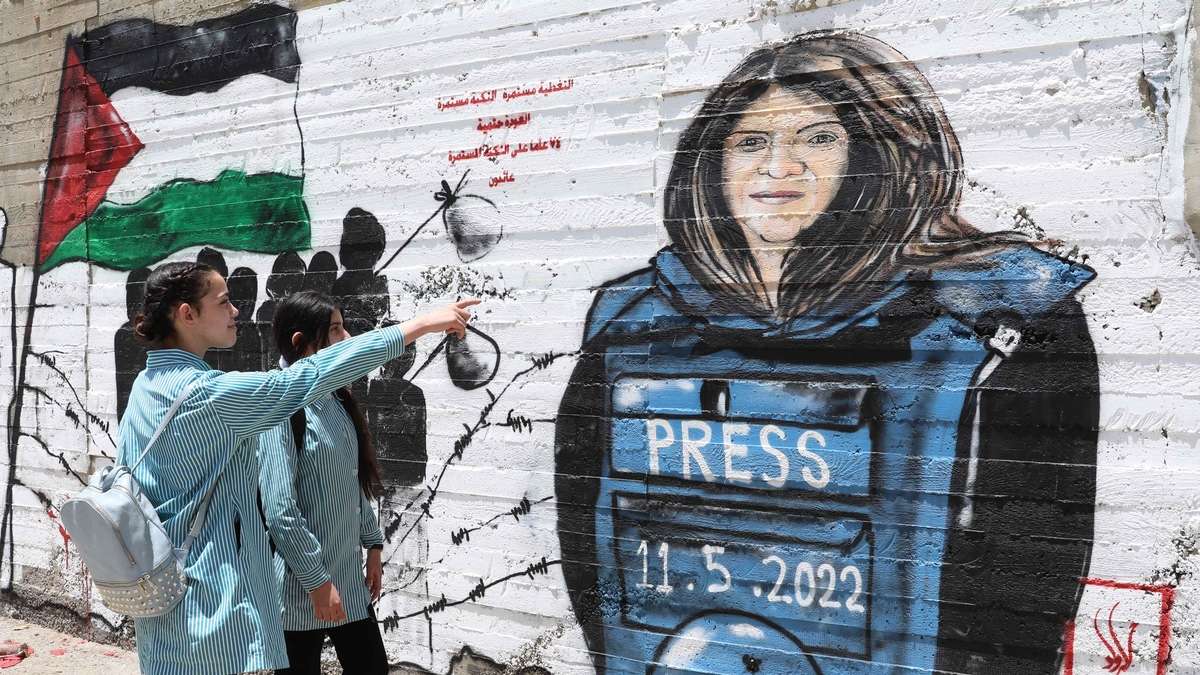 Shireen Abu Akleh has fast become an icon for the anti-Israel crowd, and that includes the International media. Photo: Flash90

The New York Times, which sets the tone and content for coverage about Israel and the Palestinians in the international media, went farther, and called into question the throwing of rocks and glass bottles. It did so by repeated (three times) emphasis on the the lobbing of plastic bottles. In a misleading description of the videos of the incident, The Times wrote, beginning with the fifth paragraph:

The violence at the funeral procession lasted for roughly a minute, and followed a tense standoff between riot police and mourners in which at least one empty plastic bottle was thrown in the direction of the police.

In a statement, the Israeli police said they “took enforcement action” after some mourners began chanting “nationalist incitement” and after officers had given the crowd a warning. As the coffin was carried out of the hospital, police said, they were “forced to act” because “rioters began throwing stones toward the policemen.”

The police later distributed video showing an empty plastic bottle and two other bottle-shaped objects being thrown in the direction of the officers in the moments before they advanced on the pallbearers, and a separate undated video showing several stones on the ground. There was no clear indication of when or how the stones had reached that spot. (Emphasis added.)

Later in the article, The Times sums up what it presents as the sequence of violence, and emphasizes again that “at least one empty plastic bottle” was thrown prior to the police charge.

The Times’ fixation on an “empty plastic bottle” despite the fact that shattered glass is audible in video documentation recalls the case of a certain notorious “boy scout” knife. In 2015, after a Palestinian terrorist charged Israelis waving a knife, The Times reported :

“He was not carrying a knife, I saw everything,” a [Palestinian] witness insisted. “If they show a knife, they planted it.”

The Israeli police soon published a photo of a pocketknife, the kind Boy Scouts use, next to the slain teenager.

In fact, the butterfly knife in question is associated with martial arts, not the Boy Scouts, and the paper was compelled to publish a correction that acknowledged, “An earlier version of this article referred imprecisely to the knife in the Israeli police photo. It is a butterfly knife, which is traditionally used as a weapon. … The knife pictured is not typically ‘the kind Boy Scouts use.’”

From dangerous butterfly knives to wholesome Boy Scout knives, from hazardous glass bottles to harmless empty plastic bottles, the agenda behind reports that obscure or downplay Palestinian violence is clear.

Indeed, in an alternate reality in which news coverage is driven by events as opposed to narrative, headlines might have stated: “Palestinian rioters at journalist’s funeral attack Israeli troops.” A longer and more complete headline would say: “Police forcefully respond to violent rioting at journalist’s funeral.” Then there’s the third route, which Haaretz chose: “Clashes With Police Erupt at Palestinian Journalist’s Funeral Procession.”

While Haaretz’s formulation failed to convey the chronology—first the Palestinian violence, then the police’s forceful response—it nevertheless communicated that clashes took place with violence on both sides, and thus provided a more accurate depiction than the foreign media’s clams of Israeli police attacking peaceful mourners.

Tamar Sternthal is director of the Israel office of the Committee for Accuracy in Middle East Reporting in America (CAMERA).