Israel and the Jewish people, despite their desire to just “fit in,” are unique in so many ways that I’ve lost count. One of those unique characteristics was highlighted this week when Twitter determined that calls to annihilate the Jewish state are mere foreign policy rhetoric, and thus don’t violate the social media giant’s terms of use.

Even bitter rivals like the US and China don’t openly call at the highest government levels for the other’s literal destruction.

Sure, the Soviet Union used to talk about “crushing” America, but that was much more in the context of political, economic and cultural dominance, rather than, again, literally laying waste to the United States. That’s “foreign policy saber-rattling,” to use the phrase Twitter tossed out to justify allowing Iranian Supreme Leader Ayatollah Ali Khamenei to continue his vile anti-Israel rants.

Here he is referring to Zionism, the millennia-old Bible-based nationalist movement of the Jewish people as a “virus”:

Some argue that the Zionist regime is a reality that the region must come to terms with. Today the #Covid_19 is a reality; should it be accepted or fought?!
The long-lasting virus of Zionism will be uprooted thanks to the determination and faith of the youth. #Covid1948

A few years ago, Khamenei tweeted about how he envisions getting rid of Israel. In short, hold a referendum allowing everyone living there except for Jews to vote on a new regime:

Why should & how can #Israel be eliminated? Ayatollah Khamenei’s answer to 9 key questions.#HandsOffAlAqsa pic.twitter.com/IVPOuNfMQH

Or if that doesn’t work, just cut it out like a “malignant cancerous tumor”:

Our stance against Israel is the same stance we have always taken. #Israel is a malignant cancerous tumor in the West Asian region that has to be removed and eradicated: it is possible and it will happen. 7/31/91#GreatReturnMarch

It’s safe to say that were President Trump to call North Korea a cancer that must be removed, thus promoting the apocalyptic slaughter of its 25 million people, Twitter would not see that as mere “foreign policy rhetoric.” It would delete the tweet, and possibly even ban the President of the United States for inciting death and destruction.

But saying the same about Israel? No problem.

The thing is, Twitter’s just going with the flow. Calls to destroy Israel have long been commonplace, even in the halls of the United Nations. Everyone’s become so desensitized to the phenomenon that no one’s likely to take it seriously until someone does actually make another attempt at extinguishing the Jewish nation. And even then, it’s doubtful anyone will lift a finger, at least not until Israel again turns the tide.

Consider all of the Arab world’s major military assaults against Israel thus far. In each case, the international community stepped in only after Israel started winning the war. The UN was shamefully impotent when Arab armies surprised Israel on Yom Kippur in 1973 and looked poised to finally realize their goal of pushing the Jews into the sea. The world body did not step in when Israel was on the brink of disaster. It felt compelled to act only weeks later, after Israel had gained the upper hand and advanced to within striking range of both Cairo and Damascus. 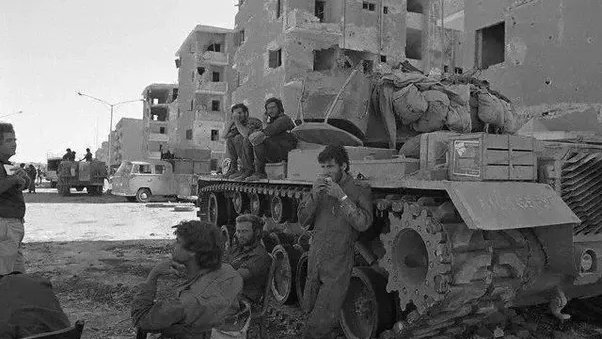 An Israeli tank crew takes a break after capturing part of the port city of Suez.

That attitude toward Israel and the Jewish people as a whole has been ingrained in the international community’s psyche over the course of millennia. Mistreatment of the Jewish people has become normative, while demonstrations of Jewish dominance are seen as an affront.

Without question, were Prime Minister Benjamin Netanyahu to “saber-rattle” against the Palestinians using the same rhetoric as Khamenei, he’d be censured. So why do the Iranian leader and many of his counterparts in the Muslim world get away with it in regards to Israel?

I find it fascinatingly ironic that modern liberal society will take such offense over the notion of the Jews as the “Chosen People,” while at the same time singling them out and setting them apart for special treatment.

You don’t want the Jewish nation to think itself “chosen”? Then stop behaving differently toward them than you do toward any other people. For instance, don’t set up a dedicated branch of the United Nations (UNRWA) to deal with Palestinian refugees just because Jews are involved. No other refugee population (and there have been many that numbered far more) has ever been given such an honor.

But you see, it’s not really about Israel.

Special treatment of Israel in a negative sense is a subconscious act of rebellion against God. It is the sad state of human nature. And the CEO of Twitter is as enslaved to it as the Supreme Leader of Iran.