As Israel prepared for the Passover, an earthquake hit the Jewish state just south of Eilat last Sunday morning. According to the Geophysical Institute of Israel the quake registered at a 4.3 magnitude.

Residents in Eilat were awakened by the tremors at around 5am. “Storms, coronavirus and now an earthquake,” Eilat resident Galit Adler Malka told Ynet. “What else? The 10 plagues? God save us,” he said.

According to the report, Dr. Ron Avni of Ben-Gurion University of the Negev warned that the area called the Great Rift Valley where this earthquake occurred is now active and could cause great damage in Israel in the foreseeable future.

Last night in an address to the nation on Israeli television Prime Minister Benjamin Netanyahu gave the following directive. “On the evening of the Passover Seder it is forbidden to go out of your house.” Consider this. The prime minister’s order is virtually a word-for-word quote from the decree given by Moses to the Children of Israel three thousand years ago on the eve of the first Passover in Exodus 12:22. “No one shall go out of his house until morning.”

Netanyahu was of course trying to protect the people of Israel from corona contamination. Passover is always celebrated in Israel with extended family members coming together from across the country to sit at home and enjoy a feast while recalling the Exodus from Egypt.

But hearing Netanyahu’s proclamation I had to wonder. Is it a coincidence that our Prime Minister uses the same words of Moses to the people of Israel on the eve of Passover? Or is this a divine intervention to wake us up to the power of the Passover message and the Lamb of God? Either way, these are amazing days we live in!

The Good News is not fake news

The Passover week is always a favorite time of year to share the Good News in Israel. Christians and Messianic Jews see this as the perfect season to talk about the Passover Lamb, the blood on the doorposts because of which the Angel of Death “passed-over” the Jewish homes and the role of Messiah and his sacrifice to bring deliverance and redemption to the People of Israel. 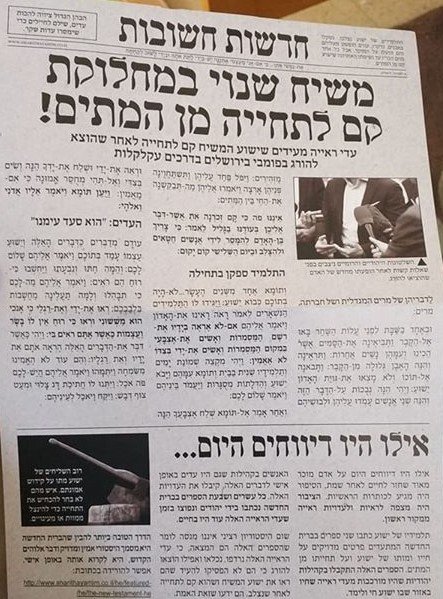 This year a mock Hebrew newspaper has been sent to homes around the country with the headlines: “Controversy: Messiah has Risen from the Dead.”  The “newspaper” goes on to bring “live” reports from Mariam Magdalena and her friend Mariam who were eyewitnesses to the event on Sunday in connection with the Passover.

The Hebrew “daily” goes on to report on how the Messiah was persecuted by local authorities and the heated debates among Orthodox Jews and the disciples of Yeshua (Jesus) in Jerusalem concerning his Messianic claims.

In “normal” times, Israel is regularly on the front pages of the world’s headlines. Now, during the strange and unsettling days we are living through, Israel continues to draw our attention to the Bible, God and the Good News.