Many of the Israel Today readers have stood on the Mount of Olives and looked out over the little valley full of graves toward the golden dome on the Temple Mount. Perhaps you are one of them and have even ridden the tourist camel parked there rather irreverently. 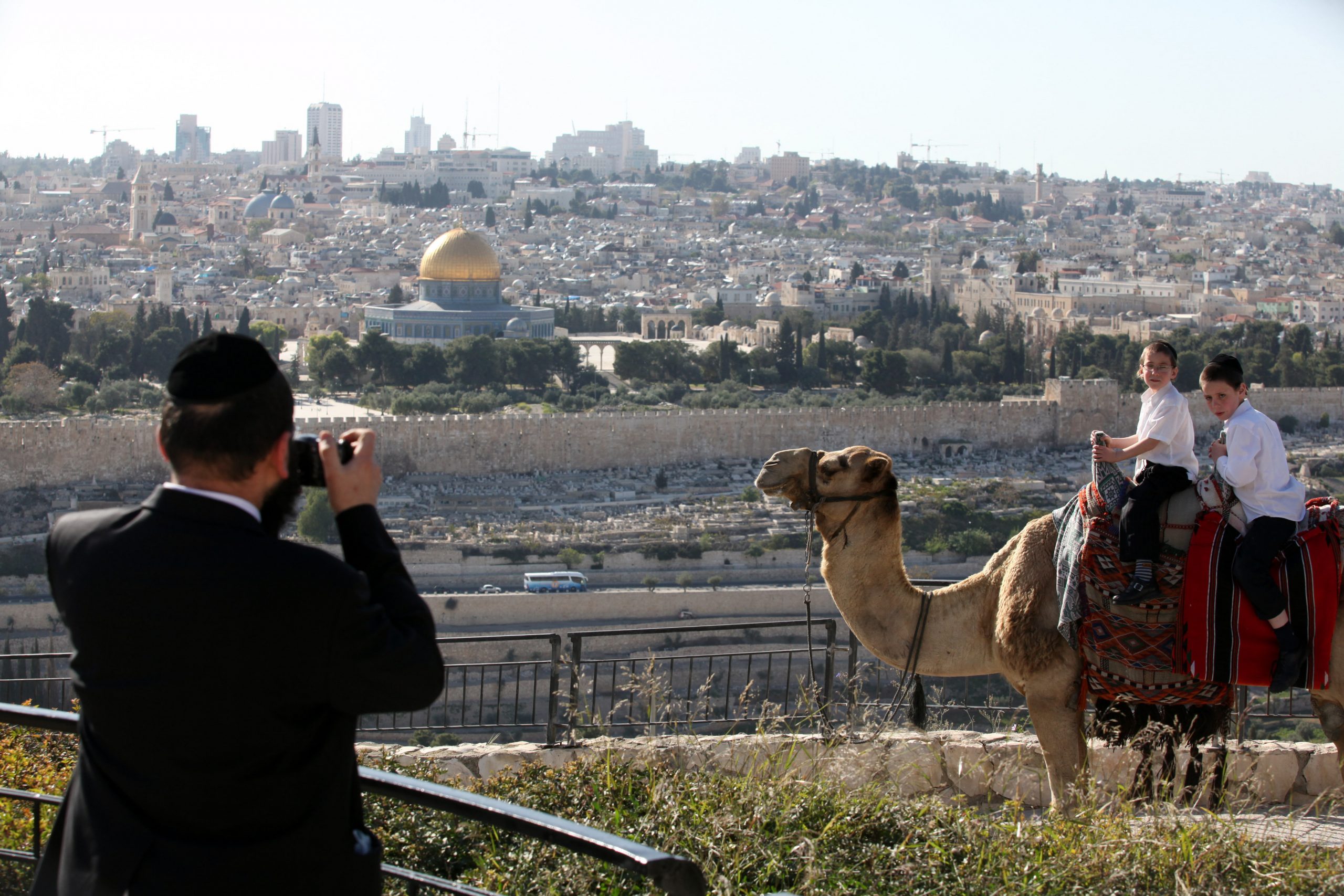 The Ynet article struck us as remarkable in serving up the Last Days to its predominantly secular Israeli audience – tying together prophecies of the Hebrew Scriptures and the New Testament and even Muslim tradition, calling the Mount of Olives:

We invite you to dig into the biblical sources with us and bring prophetic strands together with the present situation.

“Then the LORD will go out and fight against those nations, as he fights in the day of battle. On that day his feet will stand on the Mount of Olives, east of Jerusalem, and the Mount of Olives will be split in two from east to west, forming a great valley, with half of the mountain moving north and half moving south…” (Zechariah 14:3 NIV)

The Hebrew article starts with the above “humdinger” of a verse to get Israelis up to speed on the Mount of Olives as the location where in the end times God is prophesied to personally intervene to rescue Jerusalem in its most dire hour: “… this is how the prophet Zechariah ben Berechiah describes in his vision the events of the Day of Judgment. In linking the prophecy of Zechariah with the prophecies of Ezekiel and Daniel, the Jewish tradition was formed and formulated as it appears in biblical commentary literature – the Mount of Olives is closely associated with the events of the ‘Gog and Magog War,’ an expansive international military campaign against Jerusalem… then the direct intervention of God will bring redemption.” 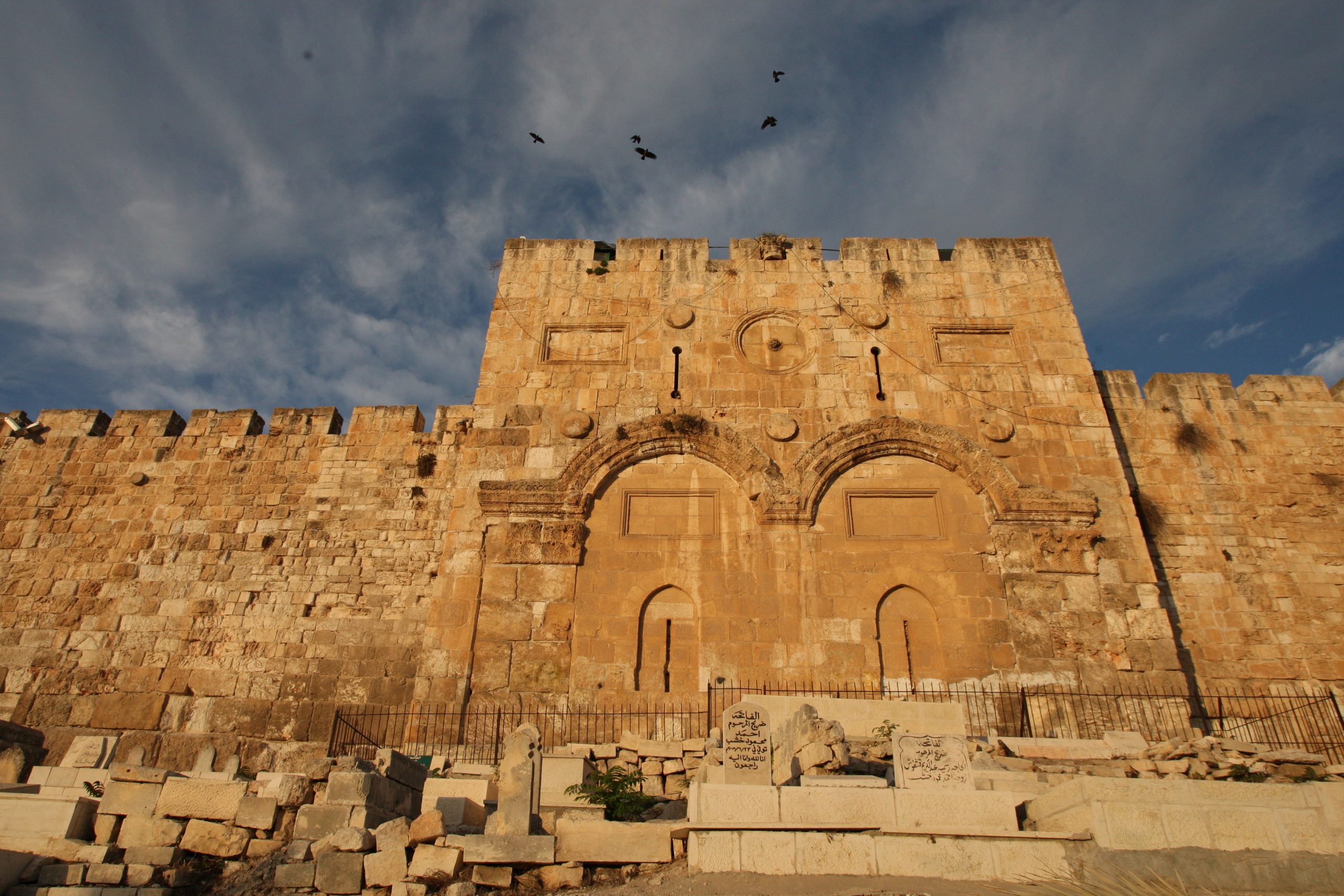 The Temple Mount’s Golden Gate through which Messiah will enter after crossing over from the Mount of Olives. Photo: Keren Freeman/Flash90

The reference is to New Testament passages and prophecies such as this:

“Each day Jesus was teaching at the temple, and each evening he went out to spend the night on the hill called the Mount of Olives, and all the people came early in the morning to hear him at the temple.” (Luke 21:37-38 NIV)

“When he had led them out to the vicinity of Bethany [on the southern slope of the Mount of Olives], he lifted his hands and blessed them. While he was blessing them, he left them and was taken up into heaven.” (Luke 24:50-51 NIV)

“… he was taken up before their very eyes, and a cloud hid him from their sight. They were looking intently up into the sky as he was going, when suddenly two men dressed in white stood beside them. ‘Men of Galilee,’ they said, ‘why do you stand here looking into the sky? This same Jesus who has been taken from you into heaven, will come back in the same way you have seen him go into heaven.’” (Acts 1:9-11 NIV)

The article also reports how some Muslim traditions drew from biblical inspiration and incorporated the Mount of Olives (“A-Tor” – the mount) into their End Times predictions of the Day of Judgment and Resurrection. 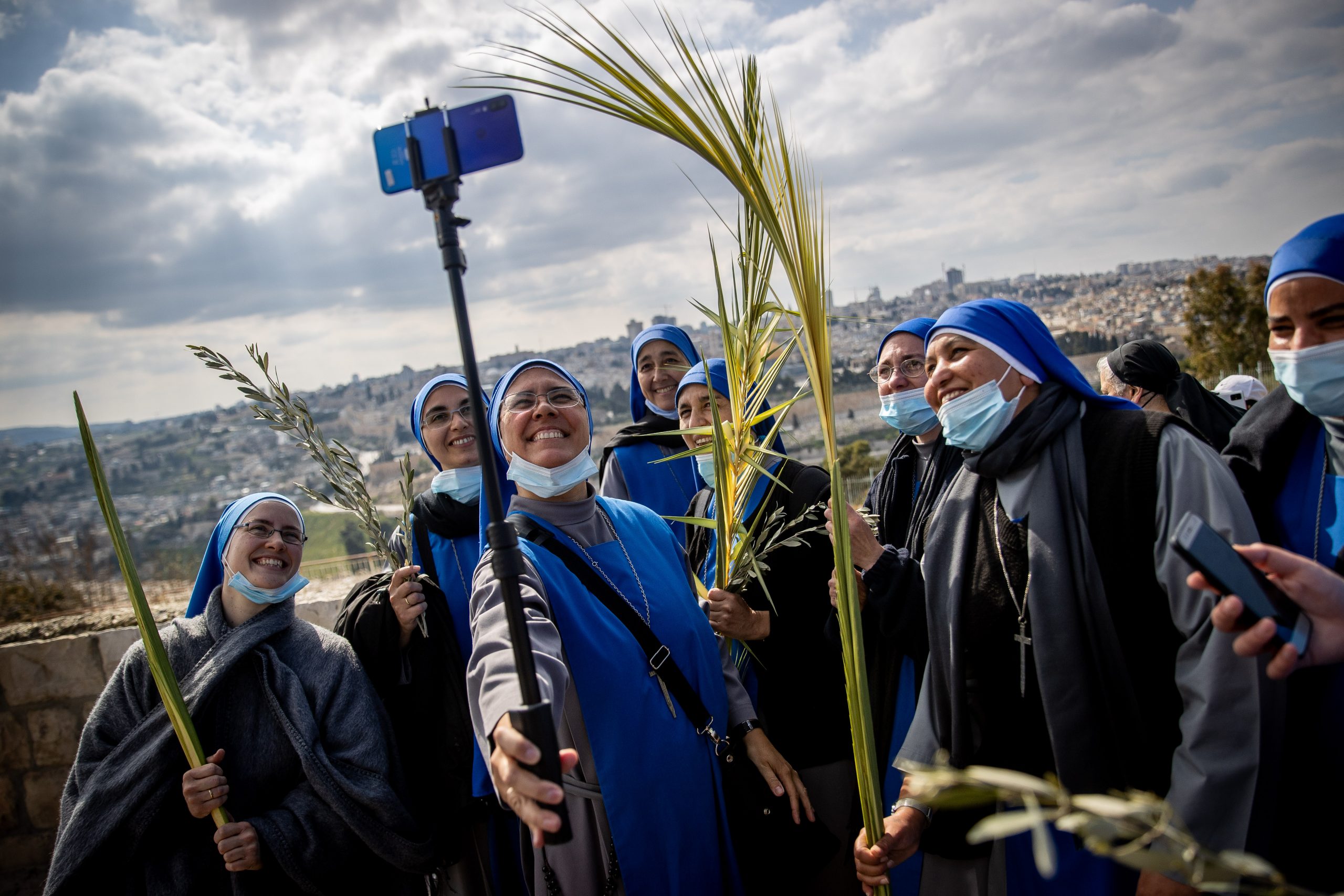 However, the original inspiring prophetic reference to the Mount of Olives has to be in the biblical book of Ezekiel. Ezekiel received his commission to be a prophet while in the exile just a few years before Babylonians burned and destroyed the Temple in Jerusalem. Ezekiel’s “inaugural” prophetic vision of the appearance of the likeness of the GLORY of God was a wild Technicolor sight of angelic living creatures with faces like a lion, ox and eagle and wheels of fire as a kind of chariot under the sapphire throne of the glowing glory of God. This is the same GLORY that Ezekiel describes as leaving the Temple by way of the Mount of Olives due to the abominations of Israel, and eventually returning to a sanctified people in the same manner:

“Then the cherubim, with the wheels beside them, spread their wings, and the glory of the God of Israel was above them. The glory of the LORD went up from within the city and stopped above the mountain to the east of it.” (the Mount of Olives, Ezekiel 11:22-23 NIV)

“… and I saw the glory of the God of Israel coming from the east. His voice was like the roar of rushing waters, and the land was radiant with his glory… The glory of the LORD entered the temple through the gate facing east… and the glory of the LORD filled the temple… He said, ‘Son of man, this is the place of my throne and the place for the soles of my feet. This is where I will live among the Israelites forever. The house of Israel will never again defile my holy name… ’” (Ezekiel 43:1-7 NIV) 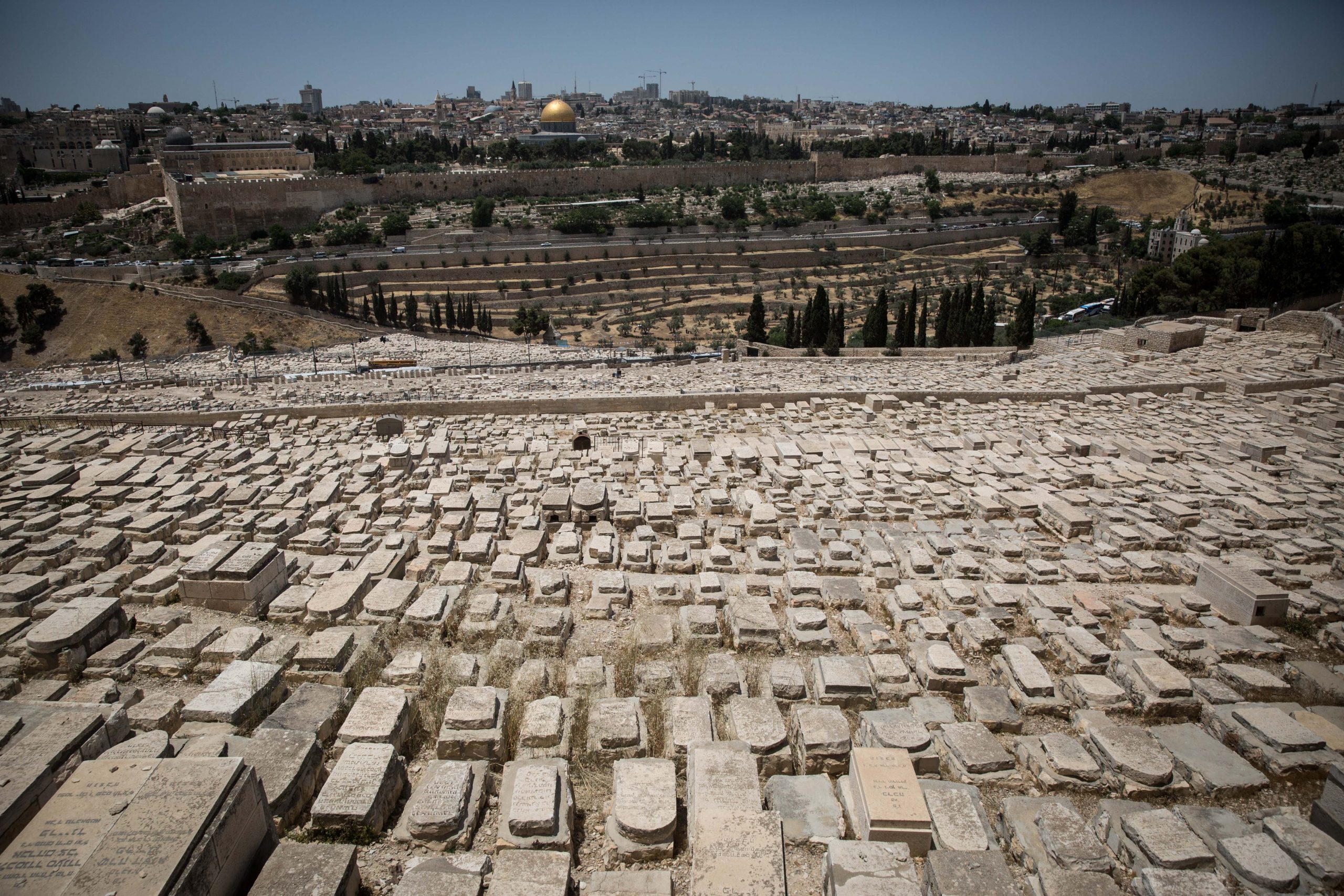 Jews from all over the world have been buried on the slopes of the Mount of Olives with the belief that they will be the first to rise when Messiah comes. Photo: Hadas Parush/Flash90

Tombs waiting to be emptied

Today nestled among the slopes and summit of the Mount of Olives, in addition to about 100,000 Jewish graves, you will find tourist lookouts, a few churches and some of the Arab neighborhoods of East Jerusalem. From the Mount of Olives and eastward the topography drops down steadily through various dry wadi riverbeds of the Judean Desert toward the lowest point on earth – the Dead Sea.

The Mount of Olives cemetery became the most desired resting place for Jews due to several Jewish traditions, but mostly the belief that those laid to rest there would be the first to rise in the Resurrection. Indeed a fascinating passage in the New Testament gives a taste for just that: “At that moment the curtain of the temple was torn in two from top to bottom. The earth shook and the rocks split. The tombs broke open and the bodies of many holy people who had died were raised to life. They came out of the tombs, and after Jesus’ resurrection they went into the holy city and appeared to many people.” (Matthew 27:51-53 NIV)

The Bible highlights the Mount of Olives as a divine entry and exit for the adjacent House of God.

Because of the seething tensions on the Temple Mount, it now serves as a quieter meeting point and stark reminder towering over Jerusalem towards the East of the coming Messiah, judgement, redemption and the resurrection. It is perhaps a sign of the times that even the eyes of the Israeli media are looking up.