“Hamas is trying to take over Nazareth and other Arab towns in Israel and even members of our City Council are encouraging them to be loyal to the Palestinians and not to Israel.” That is the explosive revelation offered by Elias Zarena, a Christian Arab from Nazareth, in an exclusive interview with Israel Today.

What most of the world has yet to understand, and even many in Israel, is the hidden strategies of Hamas and the Palestinians to stop some two million Arab Israeli citizens, Christians and Muslims, from integrating into Israeli society, and to instead cast their lot with the Islamic enemies of Israel. For his efforts, Elias’ life is threatened regularly.

“What happened in Sheikh Jarrah, and then Gaza were all part of the plan,” Elias told Israel Today. “All the recent violence in Israeli cities has been financed and organized by Hamas. They are trying to turn the Arab cities in Israel into Palestinian strongholds.”

Last week, the Baptist church in his hometown of Nazareth was vandalized and a Palestinian flag splashed across the front wall with a threat, ”No Jews and no Christians will be able to stop us.” Yes, right there in the hometown of Yeshua (Jesus), Muslims plastered a warning to both Jews, to whom Yeshua belonged, and Christians, his followers. When a councilman of the City of Nazareth told the church, “If you remove the Palestinian flag, we will put it right back up,” Elias was not surprised. “These are not only radical Islamists, but members of the Israeli government imposing Palestinian identity on Arab Israelis! Like Ahmed Tibi (former advisor to Yasser Arafat and member of the Israeli Knesset), and Arab parties Balad and the Joint Arab List who are part of the Knesset. They even work together with the Arab Communists in Israel!”

It is not only the Baptist Church in Nazareth that is being attacked, but Arab Christians and their churches around the country are increasingly identifying as Palestinians and siding with the enemies of Israel. “They are opposed to the Jewish state and want us to identify with Palestine,” Elias explained. “These are Muslim and Christian Israelis who still think they belong to ‘Palestine.’ At all of the peace efforts, from Camp David to Oslo, none of them ever talked about the Israeli Arabs or how to work together with Israel.” 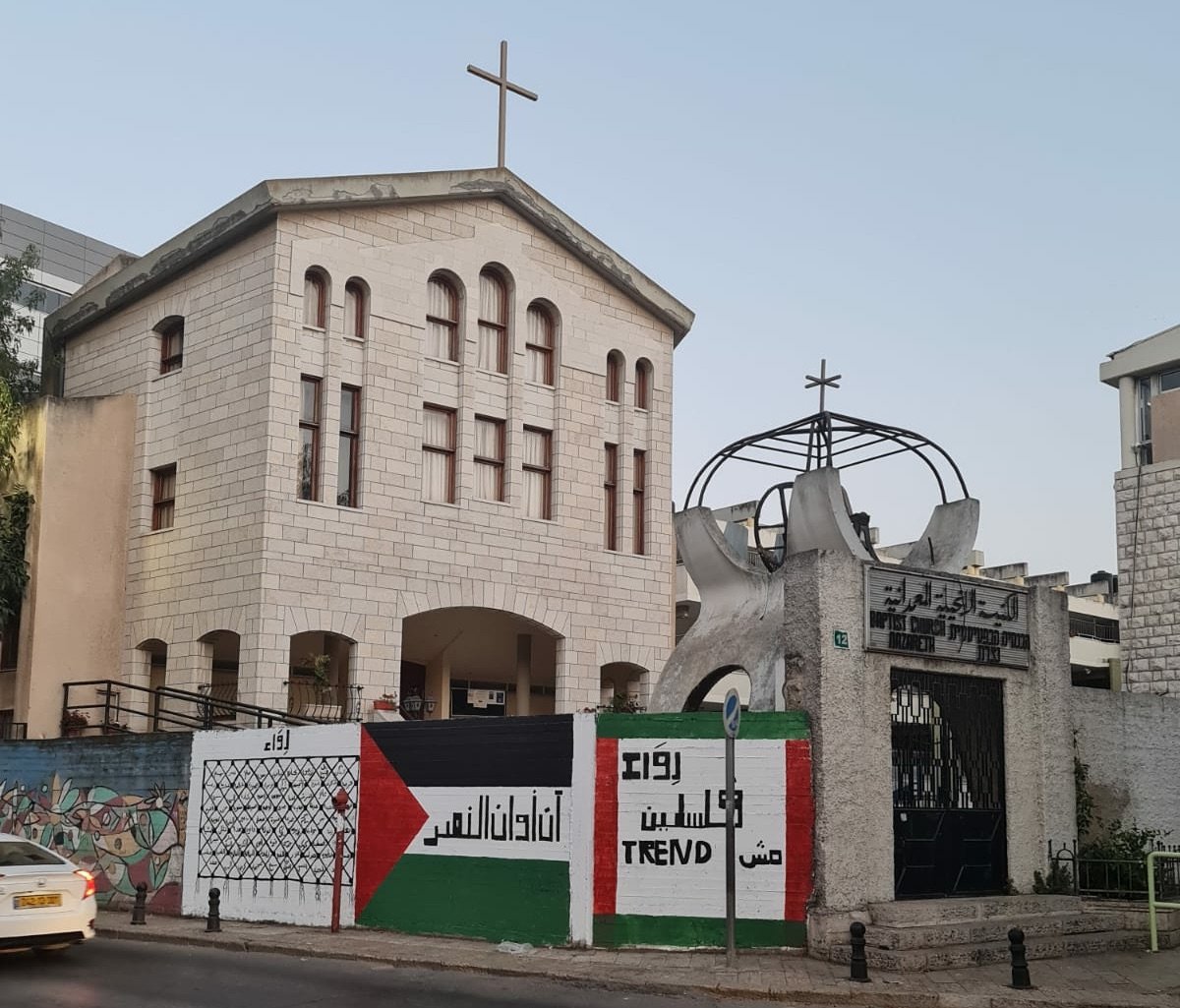 The Baptist church in Nazareth with a Palestinian threat painted on its wall.

While most of the international media blames Israel for its “poor treatment” of Arab citizens, or even apartheid, Elias points out that for 73 years since the founding of the State of Israel, Arab Israelis have done nothing to come closer to Israel. “We’ve had a Communications Minster, an Education Minister, and many other Arab Israelis in the Israeli government and not one of them has done anything to help Arabs integrate into Israeli society. ‘You belong to us. You are part of Palestine,’ they tell Arab Israelis.”

But Elias said it’s time for his people to wake up: “The Palestinians don’t care about you. It will never happen that Israel becomes Palestine. If you want to build a better life for yourselves, cooperate with Israel. Learn Hebrew, get a job together with our Jewish brothers instead of all the time listening to the Palestinian complaints and slogans against Israel.”

Elias has been working for decades with Arab Israelis to help them integrate into Israeli society. He’s doing so together with Amit Barak, a Jew who lives in Gush Etzion, the heart of the biblical homeland’s settler’s movement. Through their Jerusalemite Initiative, they run Hebrew classes for Israeli Arabs and work together with the Israel Defense Forces (IDF) to recruit local Arabs for army service and to fight for Israel. “If no one speaks up and takes down these walls of lies what will happen to the next generation?” Elias asked. “Can I just leave things as they are so that our children will continue with the anger and hatred between Palestinians and Israelis? As Christians we have a responsibility to stand up for the truth and be peacemakers.” 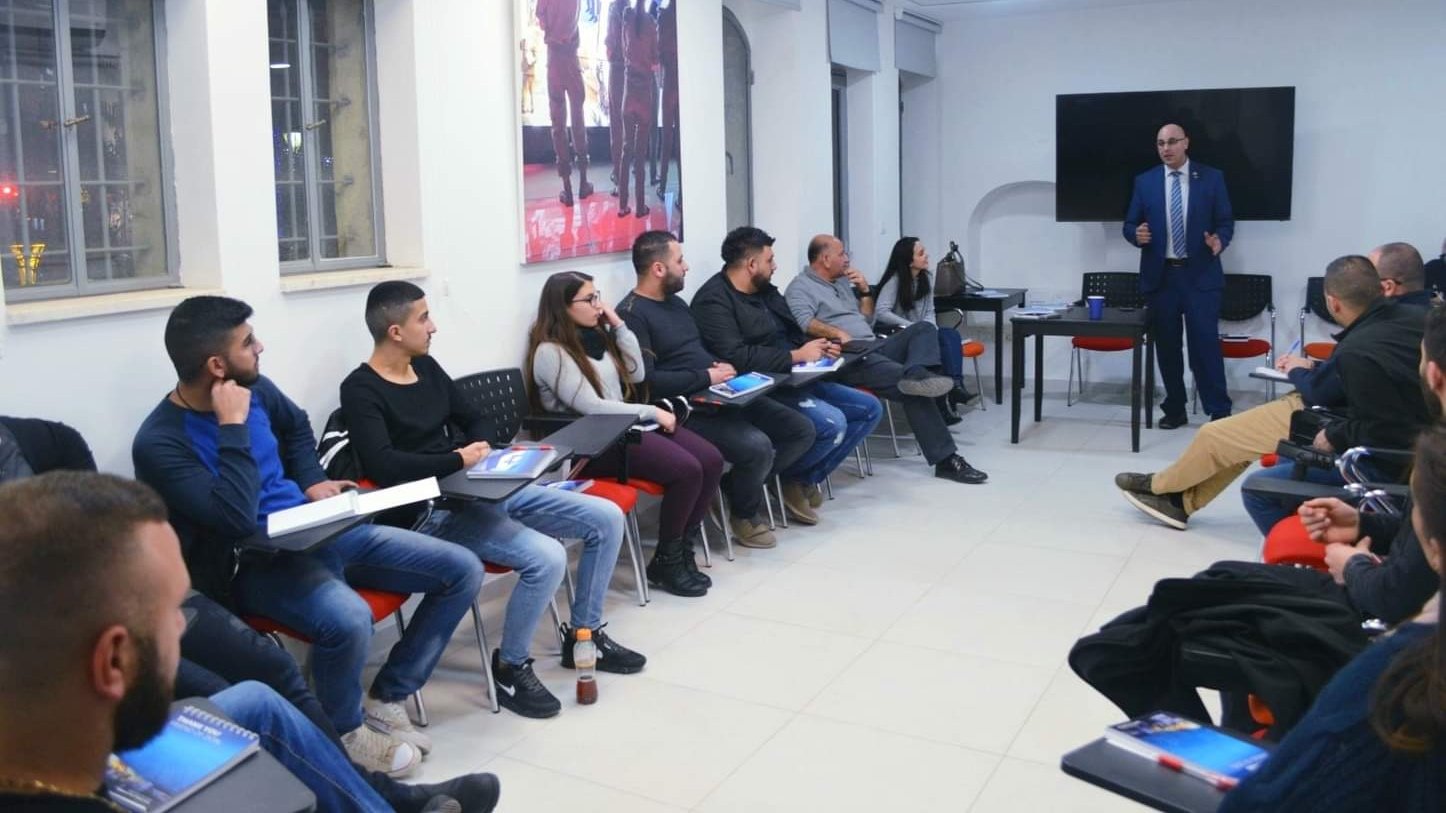 Elias speaking to a room of young Arab Christians.

Elias went on to explain:

“The native tongue of this land is Hebrew! And next to the Jews, we were among the first in this land to believe in Jesus. This is our identity. Jesus was a Jew and went to the synagogue. We are a part of this land and want to live together with the Jewish people. Open the Old and New Testaments, I tell my people. You see this is Israel and it’s all about the Jews!

“The Palestinians fight over the Temple Mount, it’s a big lie and the Al Aqsa Mosque on the Temple Mount is a deceptive ploy. This mountain is spoken about in the Bible, and it is part of Eretz Yisrael, the Land of Israel.

“But the Palestinians hide this from our people. They rewrite history even in our children’s textbooks. We are trying to restore our Christian history and culture here in Israel, our homeland.

“We also connect with Arabic-speaking Christians around the Middle East to encourage them to support Israel. Young people from Iraq, Syria and in Europe are especially open to Israel and would like very much to visit here someday.

“I want our people to understand that Israel is a Garden of Eden. Here we live freely without fear, we are respected and considered an integral part of society as Christians. I love Israel and the Jewish people. Having grown up here, I know what it means to grow up as a Christian in Jerusalem. The Muslims pressure us to fight against Israel. They would rather have war with Israel than settle things and make peace with the Jewish nation. We are Arab Israeli Christians and proud to be a part of the Jewish State together with our churches and institutions.

“We want to build our country together, not just criticize and blame one another for its problems. We can’t just take and take all the time; we also need to give and support Israel.”

One would think that there would be support for Elias and his work from among the “peace activists,” the left-wing political parties in Israel. But the opposite is true. The Left continue to feed the anger and criticism of Israel among the Christian Arabs. They are opposed to helping them integrate into Israeli society because then they would stop supporting the Left’s agenda to bring down the government with boycotts and anti-Israel propaganda.

Historically, in Israel, it has always been the right-wing leaders that have made peace between Israel and the Arab countries.