President Harry Truman played an important role in the rebirth of the modern State of Israel in 1948.

As the US President at the end of World War II, Harry Truman became well aware of the horrors of the Holocaust and of the plight of its survivors in European camps for displaced persons. He sent a personal envoy to Europe – Earl Harrison – who examined the camps up-close. Truman learned that many if not most of the Jewish survivors wanted to move to the British Mandate in Palestine. Truman saw that the Jewish people in the aftermath of World War II had no place to return to, no place to call home. This became an “humanitarian” goal for him. Truman urged British Prime Minister Clement Attlee to summarily issue immigration certificates to Palestine for 100,000 Jewish survivors, which Attlee did not do.

In 1947 the British gave notice that they were going to depart “Palestine” on May 14th of 1948 and no longer administer this land as they had been doing since World War I.

The question of the Jewish refugees and a Jewish homeland in Palestine became a major international issue and an issue in the USA as well. US Secretary of State George Marshall was against partitioning Palestine and granting a Jewish homeland. He favored caretaking of the Land by the United Nations. Marshall and others in the US government were adamantly opposed because they felt US support for an independent Jewish state would incur the wrath of Saudi Arabia with its great oil reserves, and because they thought (correctly) that outright war would break out as a result of the birth of the Jewish state.

At the same time, President Truman was lobbied by American Jewish Zionists to endorse a Jewish state. Truman was exasperated by the tension. The day before the critical decision, Truman’s former business partner and close friend Eddie Jacobson persuaded him to give another hearing to the Zionist leader Chaim Weizmann. In the end, Truman decided to fully support the Jewish State.

The United States became the very first nation to recognize the new Israeli government, and that as the world’s foremost superpower in the wake of World War II. 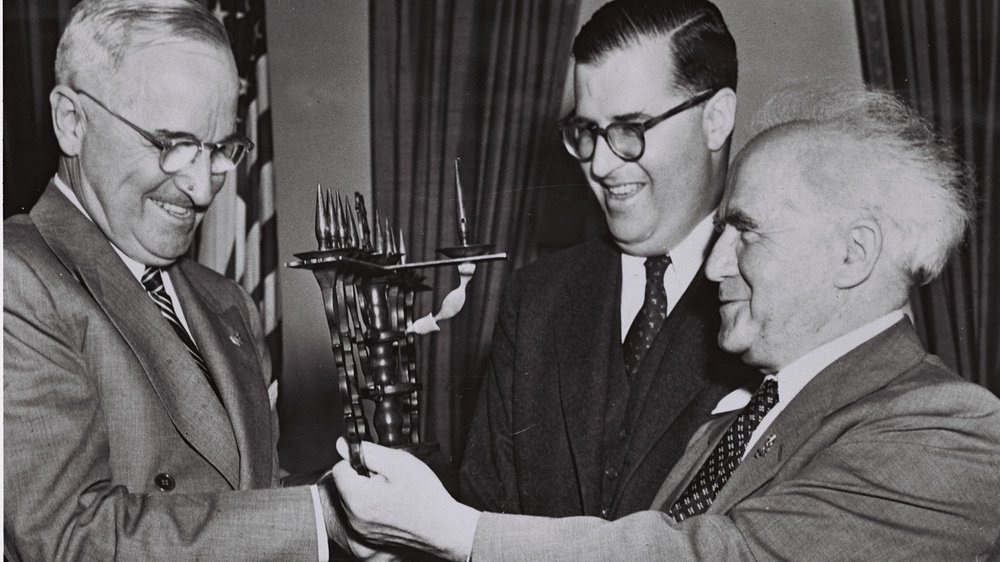 David Ben-Gurion presents Truman with a menorah during a state visit in 1951.

”This Government has been informed that a Jewish state has been proclaimed in Palestine, and recognition has been requested by the provisional Government thereof. The United States recognizes the provisional government as the de facto authority of the new State of Israel.”

”At our last meeting, after a very interesting talk, just before [the President] left me – it was in a New York hotel suite – I told him that as a foreigner I could not judge what would be his place in American history; but his helpfulness to us, his constant sympathy with our aims in Israel, his courageous decision to recognize our new state so quickly and his steadfast support since then had given him an immortal place in Jewish history. As I said that, tears suddenly sprang to his eyes. And his eyes were still wet when he bade me goodbye. I had rarely seen anyone so moved. I tried to hold him for a few minutes until he had become more composed, for I recalled that the hotel corridors were full of waiting journalists and photographers. He left. A little while later, I too had to go out, and a correspondent came to me to ask, ‘Why was President Truman in tears when he left you?’” (emphasis added)

Clark Clifford who served as Truman’s Special Counsel wrote that he knew why Truman had tears:

Clifford also wrote of the spiritual/biblical reason for Truman’s support of Israel:

”…[Truman] was a student and believer in the Bible since his youth. From his reading of the Old Testament he felt the Jews derived a legitimate historical right to Palestine, and he sometimes cited such biblical lines as Deuteronomy 1:8: ‘Behold, I have given up the land before you; go in and take possession of the land which the Lord hath sworn unto your fathers, to Abraham, to Isaac, and to Jacob.’”