After four years of excavations, Israeli archaeologists Yosef Garfinkel of the Hebrew University and Saar Ganor of the Israel Antiquities Authority, along with Australian archaeologist Kyle Keimer of Sidney’s MacQuarie University, announced on Monday that Khirbet a-Ra’i, located between the modern city of Kiryat Gat and Lachish, is most likely the Philistine city of Ziklag, where David found refuge from king Saul (1 Sam. 27).

Garfinkel and Ganor are the two leading Israeli archaeologists contesting the “minimalist” school of archaeology, which sees King David as little more than a local nomadic chieftain. The discovery of Ziklag, if indeed it is the biblical Ziklag, would deliver another significant blow to those who insist the Bible is just a collection of exaggerated national myths and fairytales.

The archaeologists working Khirbet a-Ra’i base their conclusion on a number of things. Though other sites have been proposed for Ziklag, only Khirbet a-Ra’i yields both Philistine and Judean artifacts, which means that this site was both a Philistine and Judean city. That fits the biblical account, which says that this Philistine city was given to David, who turned it into an outpost on the western frontier of Judah’s inheritance.

Other reasons for designating the site as Ziklag are the Philistine artifacts themselves, dated to the 12th-11th centuries BC, which included offering plates and candles placed beneath floor tiles, a Philistine known practice that was believed to bring good luck to a newly-built house. Similar artifacts have been found in the Philistine cities of Ashdod, Ashkelon, Ekron and Gat. 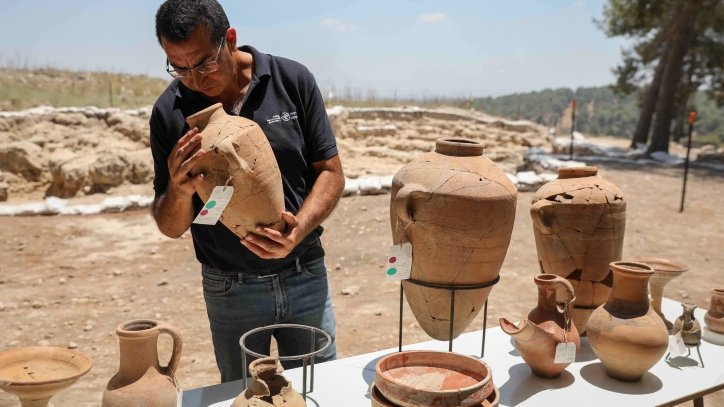 Archaeologists examine pottery recovered from excavations at what’s believed to be the biblical city of Ziklag.

Above the Philistine remains were found the remains of an agricultural settlement from the time of King David. Some of the nearly 100 intact clay vessels found at the site are identical to those found in Khirbet Qeiyafa, the biblical She’arayim. The pottery samples include storage vessels for oil, wine and grain. Food utensils decorated in the fashion typical of David’s time were also found.

Furthering the claim that this is Ziklag is the clear evidence of a massive fire, which could confirm the biblical account of the Amalekites burning the city and taking the women and children captive while David and his men were away.