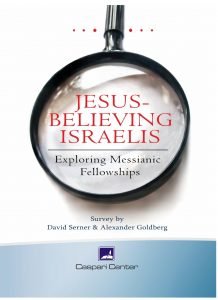 In February 2022 the Caspari Center of Jerusalem published a new book titled Jesus-Believing Israelis: Exploring Messianic Fellowships. This timely and informative ‘snapshot’ is a fresh survey concerning a great part of the current situation of Messianic Yeshua-believers (MYB – commonly referred to as “Messianic Jews”) in the State of Israel.

Complementing one another, they have conducted a national survey aiming to produce a mapping of the present-time state of affairs within the diverse groupings of local MYB. However, it should be noted, not all Israeli congregations agreed to be included in the survey. Others provided only partial information.

In an interview I conducted with both of them in Jerusalem before the manuscript was given to the printer, they shared with me the challenges and the complexities which were part of this undertaking.

Israel Today: Why and how did you decide to launch this project?

David Serner and Alexander Goldberg: This enterprise started about 4 years ago when the Caspari Center was approached by several local Messianic leaders, not all of them Jewish, who suggested to prepare an updated version for the previous survey, Facts and Myths About the Messianic Congregations in Israel, published in 1999, as issues 30-31 of the Mishkan periodical.

Consequently, we consulted with more congregational pastors about what they expected from a new survey. They positively suggested further relevant questions of which some we have also adopted.

Altogether, how long did this project last?

From the beginning of 2018 till the end of 2021. Within this process we made all effort to double-check and to re-confirm the information that was given to us. We, however, never expected that this will take so much time, but at last we have the final draft.

Did you also approach Arab assemblies?

Our survey did not include the Evangelical Arab pastors, except for one case, that of brother Samuel Aweida, who as an Arab believer is leading the Beth Eliyahu congregation in Haifa’s downtown German colony. We made Aweida an exception because he does not lead an Arab speaking congregation but rather a group of Hebrew speakers within an Israeli milieu.

Which substantial criteria did you apply for being included in your survey?

We considered Messianic fellowships. The term fellowship covered, in fact, congregations, house-groups and churches. Our focus was Jewish-believers in Israel. That is not only Hebrew speakers, but containing also those that are found in diverse communities of faith. Namely, including those that belong to regular denominational churches, such as Anglicans, Baptists, Lutherans, Pentecostal Assemblies and Roman Catholics. Those who attend the Russian Orthodox Church appear in a separate appendix.

Our survey included MYB that accept the traditional historic Christology. We asked if Jesus is viewed as both fully divine and fully human.

In other words, this matter refers to the ecumenical conciliar formula, according to which Yeshua is 100% God and 100% Man. But, did you include also those holding a different view?

We have also included all those fellowships which were included in Facts and Myths more than two decades ago. Namely, no matter what their Christology is – they were included too. The only two groups covered in 1999 that we did not survey were Mormons and Jehovah’s Witnesses. The scope of the survey was to deal with groupings in fellowships, not scattered individuals.

We also targeted non-Jews that belong to the local Messianic fellowships. Within those fellowships Jews compose the majority, while the non-Jews are the minority. The non-Jews are found within mixed-marriages with Jewish spouses, as well as single non-Jewish members. Altogether, 55% of the membership in the fellowships share certain Jewish heritage.

What was your understanding or interpretation for being a Jew?

We followed the principle that at least one grandparent is Jewish. This applies, for example, to many Olim (new immigrants) from the former Soviet countries (USSR), from Ethiopia and also those coming from western countries. This criterion is, actually, based on the Israeli Law of Return according to which at least one grand-parent is enough to make Aliyah (‘going up’, enter Israel). Practically, a non-Jewish spouse of a person who has at least one Jewish grandparent is eligible for Aliyah, but is not considered Jewish.

How did you formulate your questionnaires?

Initially most of the proposed questions were presented to congregational leaders. We received their answers by way of personal interviews on the phone. Literally, we had two surveys: first, through directly approaching the fellowships’ leaders; and second, by an open questionnaire presented online for those on Israel’s Messianic network, in 4 languages: Hebrew, Russian, Amharic and English.

Which kind of questions did you ask? What was your focus?

For example, we have specifically asked from where the Jewish heritage came from. We also asked about the frequency of the communion services and whether the fellowships have a declared statement of faith. However, we did not receive adequate answers to some of the questions.

Among other questions, we also referred to the following topics:

However, we also decided to remove questions about their view and practice of baptism. It seemed that there was a general, though unconfirmed, consensus among leaders on this issue.

Retrospectively, we regret that the question ‘What does the Gospel mean for you?’ was presented only to the participants of the online questionnaire, but not in the phone interviews with the pastors and elders.

Did you employ skilled or expert tools for preparing statistical segmentations?

We have consulted with a professional statistician to ensure that the online survey would meet standard statistical requirements. However, we do not provide full statistics about paid staff, but we mention their existence in some of the profiles.

Was your survey welcomed by all fellowships you approached without any objection?

About 5% refused to participate at all. However, although some of the fellowships were unwilling to participate, we still did include them in the book because online, on their websites, they have presented not a few details about themselves. Thus, in reality, this information is already public domain.

Which major statistical figures appear at the bottom line of your survey?

The numerical outcome of our research-survey is as follows:

What about the “butterfly MYB“, namely the phenomenon of a believer attending more than one fellowship?

This occurrence was not taken into account. It obviously inflates the numbers. It is mainly present only in larger cities where fellowships abound.

At this stage of the interview Alexander Goldberg had to leave us.

Reviewing your comprehensive book (500 pages, hard-cover), would you consider this research-survey more a history book or rather a theology book?

David Serner: I definitely see the book as a history book, for example, like taking a photo at a certain place and specific time. For me a picture is always historical. The picture that this book provides is relevant for the pre-COVID-19 era. The last interview was before the outbreak of the pandemic, in the beginning of the year 2020.

For me, basically, this book is historical in its nature, while it also deals with theological issues and provokes theological thinking. The theological themes in the book stimulate the reader to consider theological matters.

This new book is, in fact, not only in line with Caspari Center‘s previous survey called Fact and Myths about the Messianic Congregations in Israel published in 1999. It is also in direct line with the first survey composed by Per Østerbye, a Danish researcher.

Østerbye’s book, titled The Church in Israel [A Report on the Work and Position of the Christian Churches in Israel, with Special Reference to the Protestant Churches and Communities] was published in 1970 in Lund, Sweden. Indeed, it was Østerbye who laid the foundations for this kind of surveying the Israeli MYB – while most of them are part and parcel of the broader Protestant-Evangelical world.

All in all, Jesus-Believing Israelis: Exploring Messianic Fellowships is a useful book for navigating within a labyrinth of diverse Israeli MYB, as well as for making additional comparative studies.

Significantly, this new book exposes the current data relating to the majority of Messianic Jews in Israel, as opposed to numerous other overstated and sensational ‘reports’ promulgated about this engaging movement in the Promised Land.

On the whole, it is also hoped that corrections of some factual mistakes and adjustments of certain inconsistencies, alongside the inclusion of relevant and up to date bibliographical references will be comprised within future editions of this book.