Over Shabbat, a Palestinian terrorist moderately wounded an Israeli civilian in a Jerusalem stabbing attack near the Damascus Gate. Border Police officers shot the terrorist dead on site. However, interestingly, this terror attack has not made headlines like other terror attacks in Israel. Turkey’s Hurriyet, BBC World, The Guardian, Le Monde and Le Figaro all refrained from covering this terror attack. And even in the publications that did cover it, what happened in Jerusalem was not a headline news story in most cases.

For example, the headline stories on Al Jazeera are the volcano eruption in Indonesia, civil unrest in India, and human rights abuses committed by the Taliban. Although Al Jazeera did cover the Jerusalem attack, the language in the article was less anti-Israel than past Al Jazeera articles covering such incidents in Israel.

When this author published Women and Jihad: Debating Palestinian Female Suicide Bombings in the American, Israeli and Arab Media, I wrote during the “Knife Intifada”: “After a female terrorist injured two Israelis in a hit and run terror attack, the headline in Al Jazeera was ‘Israel kills Palestinian woman in occupied West Bank.’”

“According to Al Jazeera, the female terrorist only ‘allegedly; rammed her car into a parked vehicle and injured two Israelis near an ‘Israeli settlement,’” the book continues. “Inside the article, Israel is accused of using excessive force and obstructing the peace process via the construction of illegal settlements, but the Palestinians are not held responsible for their acts of wanton violence and aggression or for their incitement.” That was in 2016.

Fast forward to 2021 and Al Jazeera covered this recent terror attack very differently. In this instance, the terror attack was not “alleged,” as Al Jazeera proclaimed in their title: “Israeli wounded in East Jerusalem stabbing, assailant killed.” Although Al Jazeera did report that Israel shot dead a Palestinian, they also noted it was after he “stabbed an Israeli civilian and tried to attack the police.”

While Al Jazeera did publish accusations by Hamas and Palestinian Authority officials that Israel had killed the terrorist in cold blood, they also published the account given by the Israel Police, Israel’s Border Police Chief and Magen David Adom, which told a different story. And in the continuation of the article, instead of blaming Israel for the wanton violence, they pointed out that the incident occurred following a string of other attacks, including those in which “a Hamas affiliated gunman killed a Jewish tour guide” and an assailant killing two police officers. However, Al Jazeera still considers Israel an occupying power, both in East Jerusalem and the West Bank. Nevertheless, the rhetoric in this article was not nearly as anti-Israel as it was in past Al Jazeera articles. 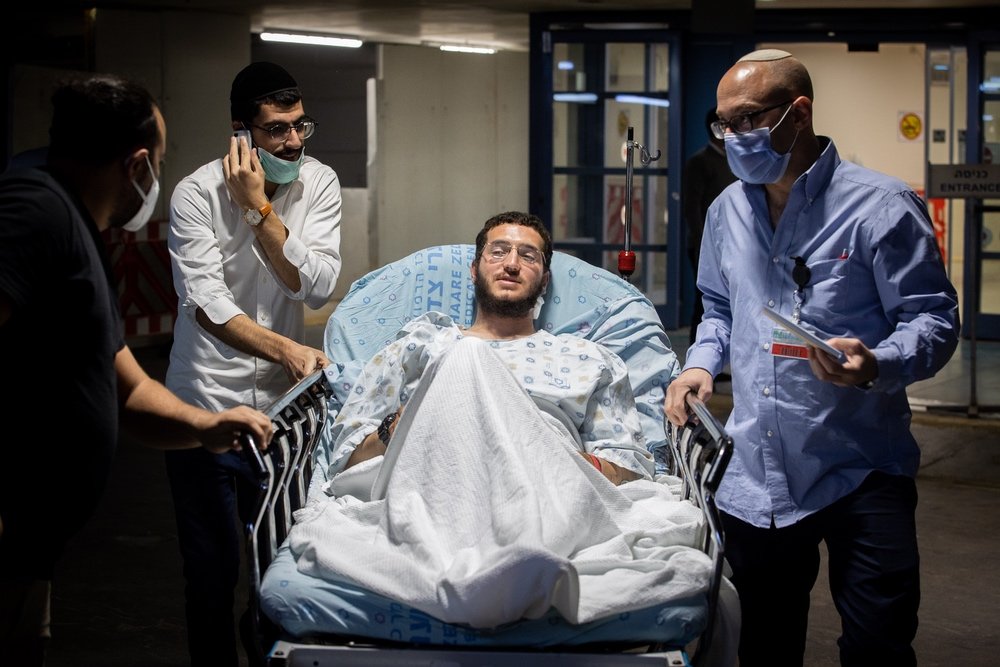 The victim of the terrorist stabbing, Avraham Elmaleh, in stable condition at a Jerusalem hospital.

Like in Al Jazeera, the recent terror attack in Israel was not a headline news story in Al Arabiya, which preferred to focus on the visit of the Syrian foreign minister to Iran, Taliban violence, the civil unrest in India, the volcano eruption in Indonesia, and the meeting between French President Emanuel Macron and the Saudi Crown Prince. The headline in Al Arabiya was a bit more anti-Israel, however. According to the headline, “Israeli police kill Palestinian assailant in Jerusalem.” The focus in the headline was on the perpetrator in the attack, not the victim. Nevertheless, in the text of the article, Al Arabiya does note that he was shot dead after “stabbing an Israeli civilian and attempting to stab police officers.” In fact, the body of the article was very similar to Al Jazeera’s coverage of the terror attack, including both Hamas and other Palestinian sources, as well as Israeli sources. Yet, it differed in the sense that Al Arabiya said Israel has “occupied Jerusalem since 1967,” yet they did not call Israel an occupier as blatantly as Al Jazeera did.

While Turkey’s Hurriyet Daily News, which is known to be more secular, did not cover the recent terror attack in Israel, viewing it to not be as important as NATO’s interest in Turkish drones, the Taliban’s crimes against humanity, the restoration of Ottoman historical sites, the coronavirus crisis in Turkey, the local economic crisis, an attempt on President Erdogan’s life and a recent terror attack in Iraq, it was a lead story in Yeni Safak, which is an Islamist publication in Turkey that is known to be the mouthpiece of the AKP-led government.

The headline in Yeni Safak was, “Palestinian president’s office condemns killing of young man by Israel.” The fact that he was a terrorist was irrelevant to Yeni Safak, which noted that Mahmoud Abbas’s office called it “the assassination of a young man.” According to the Turkish publication, “The latest crime was a continuity of Israel’s ongoing aggression on the Palestinian people that should not be tolerated.” They noted that Abbas’s office “urged the international community to immediately act to stop Israel’s crimes, provide protection to the Palestinian people, end the occupation and create an independent State of Palestine with East Jerusalem as its capital.”

Yeni Safak pointed to the now-viral video clip of the young terrorist being shot by police after he was already lying on the ground. While they did quote the Israel Police as stating that he was neutralized after stabbing an Israeli as an afterthought, Yani Safak emphasized that the Palestinian Red Crescent was not permitted to offer treatment to the wounded Palestinians in the area, noting that three other Palestinians were also wounded during clashes on site. 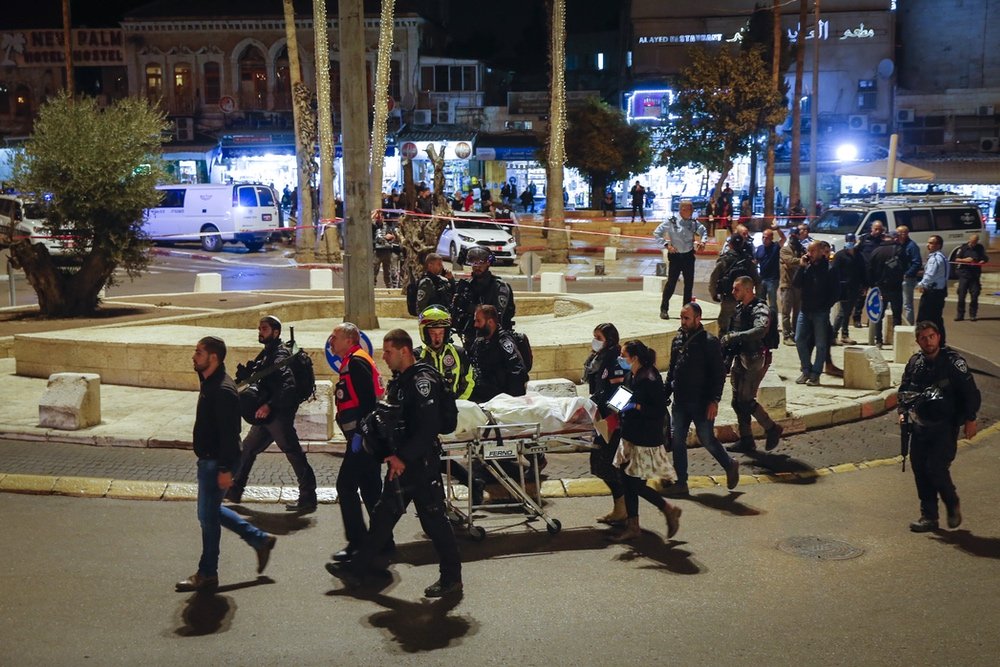 Israeli security personnel remove the body of the deceased terrorist from the scene of the attack.

Yani Safak was the exception rather than the rule. In The New York Times, the recent terror attack in Israel was not a headline news story in the slightest. In their eyes, what is happening in Afghanistan, Myanmar and Indonesia is far more important than what is going on today in Israel. However, unlike Le Figaro, Le Monde, BBC World and The Guardian, The New York Times did cover what happened in an article titled: “Palestinian who stabs Israeli in East Jerusalem is killed by police.” In the subtitle, the Times noted that this was the fifth such knife attack since September.

In the text of the article, The New York Times stressed that before the terrorist was killed, he wounded an Israeli civilian near the Old City, before also trying to stab two police officers. The New York Times compared this recent terror attack to what went on during the “Knife Intifada” and also the recent killing of an Israeli tour guide last month. However, they also referenced “a spike in violence against Palestinians by Israeli settlers in the West Bank,” as if that somehow justified this recent terror attack. The New York Times also shared the speculation that the terrorist was killed “after he was incapacitated.”

According to the Times, this incident could lead to further “unrest in East Jerusalem,” which they recognized was holy to both Jews and Muslims. While Al Jazeera and Al Arabiya generally described East Jerusalem as under occupation, The New York Times claims that Israel captured it in 1967 and annexed it from Jordan, yet the Palestinians consider it “under occupation.” The New York Times also cited the 11-day war last May, claiming it was set off by “Israeli raids on the Al Aqsa mosque,” which is nothing short of a Palestinian libel against the State of Israel, reminiscent of Haj Amin Al Husseini’s false claims in the past that “Al Aqsa is in danger.” The New York Times also quoted Hamas as claiming that they were against the “nature of the killing,” without recognizing that Hamas considers the terrorist a martyr and not a terrorist.

While The New York Times did quote testimony from the Israeli victim who was stabbed as well as a statement by Israeli Prime Minister Naftali Bennett, they also quoted MK Ahmed Tibi as proclaiming that it was “a coldblooded execution of an injured man who presented no danger to anyone. This is a criminal act that requires investigation.”

However, while The New York Times considered the recent terror attack in Israel to be low priority, The Washington Post made the story number three in the international news section of the paper. Their article was titled: “Clashes break out in Jerusalem after Palestinian who stabbed Israeli is killed by police.” Yet, their coverage was more pro-Israel than that of the Times. They first of all objectively describe what happened, based on Israeli police reports and accounts from Magen David Adom.

While they mention the social media accounts claiming the terrorist was shot after he was incapacitated alongside a condemnation by MK Aida Touman Sliman, they also quoted Bennett’s explanation for what happened, as well as Internal Security Minister Omer Bar Lev, who stated: “The police officers needed to decide if the injured terrorist would detonate an explosive device. Where there’s a doubt, there is no doubt.” They also quoted the Israel Police as claiming much “false information” has been disseminated about what happened.