In response to yesterday’s missile attack by Iranian forces from Syrian soil on northern Israel, the Israel Air Force (IAF) struck dozens of Iranian al-Quds Brigade targets in Syria during the night. Among the precision strikes were military installations around Damascus, observation posts on the Syrian Golan Heights and weapon depots. After the Syrian army fired anti-aircraft missiles at the IAF warplanes and despite several warnings from Israel, the IAF also destroyed several Syrian air defense batteries.

In contrast to previous attacks in Syria, this time the IDF openly declared its intention to attack the Syrian installations, and even publishing a map of the specific targets. 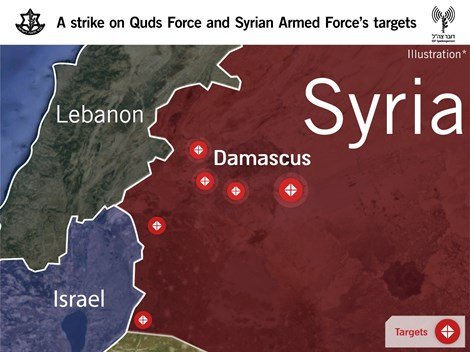 “The Israeli army blames the Syrian regime for what is happening on its own territory and warns against engaging in or tolerating hostilities against Israel. Such actions will result in a violent response,” an IDF spokesman said.

“The Israeli army will continue with resolve to crack down on Iran’s infiltration into Syria. The army is prepared for various scenarios and will continue to work until the security of Israel’s civilian population is secure,” the spokesman added. The IDF attacks in Syria were coordinated with Russia and the United States.

Israel’s new Defense Minister, Naftali Bennet, said this morning about the Israeli attacks in Syria: “The rules have changed, anyone who attacks the State of Israel during the day will not be able to sleep at night. It was the same last week and again this week. Our message to Iran is clear: wherever you will stretch out your octopus-like poisonous arms, we will cut them off.”

Prime Minister Netanyahu also commented on the IAF’s nocturnal attacks: “I stated that anyone who harms us will be harmed by us. And that is what we did tonight against military targets of the Iranian Al Quds Brigade. We will continue to be very determined regarding the security of Israel.”