Yeshua (Jesus) may have walked on her waters, but Israelis are jumping up and down for joy as the Sea of Galilee finally fills up. For a long time, the precious water levels have receded to dangerous lows due to lack of rainfall, turning the freshwater sea into a wretched saltwater lake.

In the past week alone, water levels rose 18 centimeters (seven inches), bringing the current level up to 210.04 meters below sea level (689.10 feet). That means that the water level is just 1.24 meters from the red line, or about four feet from its full capacity. When that level is reached, the dam located at the southern tip, which has been closed since 1995, will be opened to allow waters to rush down the Jordan River and replenish the entire Jordan Valley all the way down to the Dead Sea. And don’t forget, the Kinneret is the lowest freshwater sea on earth and the second lowest body of water in the world (after the Dead Sea).

What’s the right name for the Sea of Galilee?

Like many places in Israel, Lake Kinneret has many names that were used throughout history, usually depending on the who was living in the area at the time. Here is a list so that you won’t get lost trying to find the sea, which can be called any one of these names even on road signs along the highways.

The modern name in Hebrew, Kinneret, comes from the Hebrew Bible in Numbers 34:11 and Joshua 13:27. The most commonly accepted reason for this name comes from the shape of the lake, which looks like a harp or lyre, wide and rounded on the northern part and narrower on the southern. There was an important Bronze and Iron Age city called Kinneret close by the lake, but no one is sure which came first, the city or the sea.

All of the Old and New Testament writers call the Kinneret a “sea” in both Hebrew and Greek. Only Luke calls it “the Lake of Gennesaret” (Luke 5:1) taken from the Greek Gennēsaret, which anglicized reads Chinnereth, or “harp” in Hebrew. What goes around comes around!

Flavius Josephus and the Babylonian Talmud mention the “Sea of Ginosar” after the small fertile plain of Ginosar that lies on the sea’s western side just north of Tiberius. Ginosar is just another local version of the Hellenized Gennesaret, or “Kinneret.” I hate to keep “harping” on the point.

These terms are more commonly used in modern English but are also found in antiquity. In the Greek New Testament “Sea of Galilee” is used in the Gospel of Matthew 4:18; 15:29, and Mark 1:16; 7:31. In the Gospel of John we read “the Sea of Galilee, which is the sea of Tiberias” (6:1). Even back then travelers needed instructions to get to the right place! Sea of Tiberias is also the name mentioned in Roman texts and in the Jerusalem Talmud, which in Arabic is translated into “Lake Tiberias.” 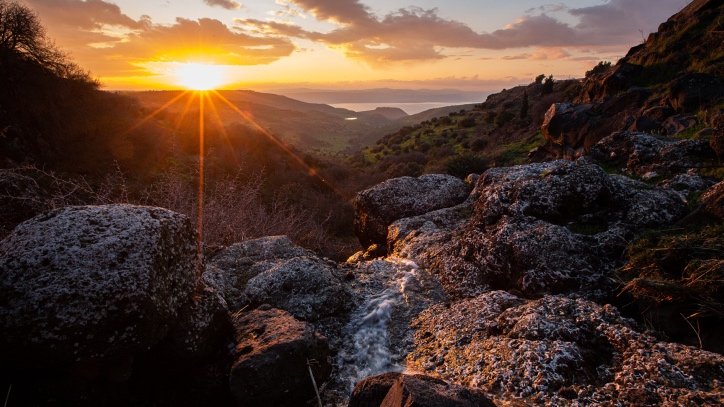 Shores that see beyond

There is something magical about the Kinneret that has inspired people from around the globe to visit its pleasant shores. Israelis love the Kinneret, not only because it is their main source of fresh water in a dry and barren land. Even the Messiah Yeshua chose to spend most of his time and ministry along its shores.

The usually scornful Mark Twain, who visited Galilee on his horse in 1867, was deeply moved by the significance of the Kinneret. In his famous “Innocents Abroad” he writes:

“In the starlight, Galilee has no boundaries but the broad compass of the heavens, and is a theatre meet for great events; meet for the birth of a religion able to save a world; and meet for the stately Figure appointed to stand upon its stage and proclaim its high decrees.

“But in the sunlight, one says: Is it for the deeds which were done and the words which were spoken in this little acre of rocks and sand eighteen centuries gone, that the bells are ringing to-day in the remote islands of the sea and far and wide over continents that clasp the circumference of the huge globe?”

Naomi Shemer, considered the “First Lady of Israeli song and poetry,” composed “Yerushalayim Shel Zahav”(“Jerusalem of Gold”) in 1967, which became Israel’s second unofficial anthem after Israel won the Six-Day War that year and reunited Jerusalem. Shemer, who was born and grew up in Kibbutz Kinneret, was also taken with the sea’s enchantments.

Here are the final words from her beloved song “Kinneret.”

“Even should I become impoverished and walk hunched over, or my heart disturbed by foreign attractions – how can I betray you my Kinneret – how could I forget – as though I could forget the innocence of youth?”

Listen to Shemer’s beautiful song about the Kinneret