Many Christians and Jews believe that according to Scripture, a Jewish Temple will be restored to this ancient mountaintop that was captured by the Muslims in 636 AD. Such a proposition has captured the imaginations of religious and secular people around the world. This 36-acre plateau is the most contested piece of real estate in the world, stirring heated passions among Christians, Jews and Muslims.

Recently, a theory that the Temple stood not atop Mount Moriah, but rather along the southern slopes in the City of David, has been making some noise in the Christian world. Some Evangelical Christians embrace this idea in hopes that the Jewish Temple could be built without destroying the Islamic mosques on the Temple Mount, and without causing World War III!

As happens in some Christian circles (particularly concerning Israel), the theory was based on incomplete information and false assumptions that spread too far and caused too much confusion. Some Christians are getting very excited about the idea that the Jews could build the Temple in the City of David, believing that doing so will hasten the day of the Messiah’s return. But fake news and debunked theories will not bring the true King of Israel or his Kingdom to Israel.

Here at Israel Today, we published an opinion piece describing these theories to give our readers an opportunity to see for themselves.

We then talked to archaeologist Eli Shukron to get to the bottom of this strange conspiracy. What we discovered was a web of hyperbole, inaccuracies and assumptions promoted by a few well-known Evangelical Christians.

Mr. Shukron works for the Israel Antiquities Authority, holds a master’s degree from the Institute of Archaeology at the Hebrew University in Jerusalem, and began his work in the City of David over 15 years ago. Shukron is one of the leading experts on the archaeology of Jerusalem, with extensive experience in the First and Second Temple periods.

During his excavations in the City of David, Shukron uncovered a wall that he said “could have belonged to a temple” in the area. He also unearthed a bell-shaped golden pomegranate like the kind worn along the bottom hem of the Temple priests’ robes.

In 2014, Shukron led a group of Evangelical Christians on a tour of the City of David and showed them the wall and the pomegranate. One of the tour hosts, Frank Turek, asked Shukron if this wall could be evidence that Solomon’s Temple was not on the Temple Mount, but here in the City of David. “That wall certainly was some temple from the first temple period (circa 970-586 BC), but Solomon’s Temple was on the Temple Mount,” Shukron replied. 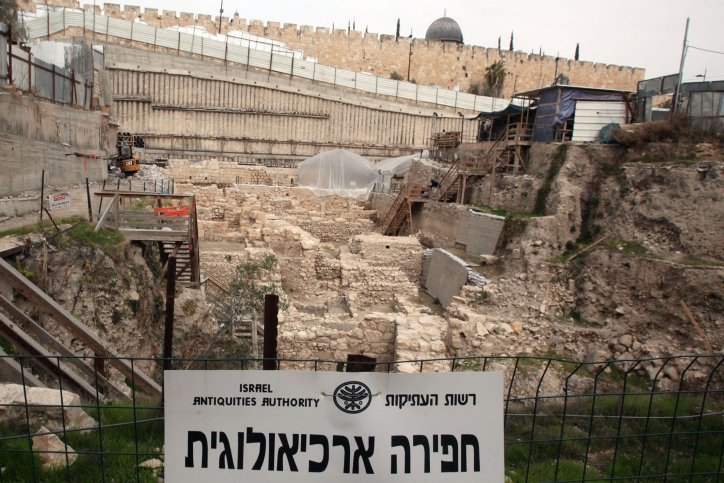 Archaeological digs just south of the Temple Mount have yielded stunning finds, but no evidence that the Temple was located there.

Unsatisfied with Shukron’s answer, Turek, together with his co-host Bob Cornuke, went on to promote the idea that the Temple could very well have been in David’s City. Cornuke even wrote a book in 2014 titled Temple describing how Solomon’s Temple was most likely not on the Temple Mount, but in the City of David. Cornuke then used some of Shukron’s findings to suggest that the Israeli expert also supports this theory.

We asked Shukron what he thought about the new Christian theory. “There is no evidence that the Temple was in the City of David,” Shukron told us adamantly. “The Temple known as Solomon’s Temple was absolutely on the Temple Mount. I have no question about that,” he confirmed.

But Shukron’s firm position on the matter hasn’t stopped Turek and Cornuke from tying their “new and exciting discovery” to the Israeli archaeologist.

Here are a few quotes from an article published by Turek on how he and Cornuke came to promote their idea that the Temple was in the City of David, and that Shukron himself supports their theory.

“When I asked him (Shukron) what archeological evidence exists for the Temple Mount site, he offered very little in response,” Turek writes. This is an absurd argument based on the fact that Shukron didn’t have much to say. The truth is that the overwhelming amounts of archeological evidence, including the huge stones of the Western Wall that were part of the Temple courts, could not be fully explained during a day-tour of the City of David, and certainly not to untrained Christian tourists.

Turek goes on to speculate that “perhaps the paucity of evidence (that the Temple was not on the Temple Mount) is due to the political realities that prevent much digging there.” Turek again uses “paucity of evidence” to support his theory. But suggesting that “political realities” are preventing Shukron from presenting the facts is outright offensive.

“So why isn’t Shukron suggesting his site (David’s City) is where the Temple was?” Turek writes, calling into question the integrity of one of Israel’s greatest archaeologists. “Shukron would need to evaluate more of the evidence and the opinions of his colleagues before he would ever entertain making a shift on such a monumental question. The Temple Mount is so entrenched in tradition, politics, and Jewish identity-the Western Wall being the holiest Jewish site for prayer-that any shift in opinion would be met with great resistance. However, Shukron is open to the possibility,” Turek concludes.

How dare this Evangelical Christian, with no experience or education in archaeology, suggest that a highly-trained Jewish archeologist with impeccable credentials and expertise in the First and Second Temple history is basing his findings on “entrenched Jewish identity and politics.”

When I asked Mr. Shukron about this, he was hesitant to comment, saying only that he “doesn’t know how these things got blown out of proportion, and anyway, the Temple Mount is where the Temple was,” he reiterated.

The Evangelicals asked Shukron, “If it’s not Solomon’s Temple, then whose temple did you discover?” Shukron replied simply, “We’ll see,” meaning the wall he uncovered in David’s City is not from Solomon’s Temple, but one day we will know what kind of temple it was. Even that wasn’t enough for the itchy-eared tourists. They had to push, “Is it possible that his site (Shukron’s) could be the game-changing discovery that prevents World War III?”

Clearly, these Christian “explorers” are more interested in promoting sensational headlines than learning from the plain facts on the ground. This is unfortunate, as it not only leads Christians to put their hopes in unfounded theories, but even worse, makes Christianity and Jesus look foolish in the eyes of prominent Jewish professionals.