A shekel made of pure silver that was used for trade in Jerusalem about 2,000 years ago, during the Second Temple period, was discovered in Jerusalem by an 11-year-old girl.

The coin weighs about 14 grams. On one side is an inscription of a cup with the caption: “Israeli shekel” and next to the cup are the letters: ש”ב – shorthand for “second year” – the second year of the Great Revolt of the Jews against the Romans (67-68 CE). On the other side of the coin is an inscription identified by scholars as the headquarters of the High Priest, and next to it appears in ancient Hebrew script the words: “Holy Jerusalem.”

According to Dr. Robert Kool, Head of the Coin Department of the Israel Antiquities Authority, “This is a rare find, since out of many thousands of coins discovered to date in archeological excavations, only about 30 coins are coins made of silver, from the period of the Great Revolt.”

The coin was discovered in dirt that came from archeological excavations conducted by the Israel Antiquities Authority on the “Pilgrimage Road,” in the City of David National Park.

According to archaeologist Ari Levy, Director of the Excavation on behalf of the Israel Antiquities Authority, “This street, which connected the Siloam Pool in the south of the City of David to the Temple Mount in the north, was Jerusalem’s main street during the Second Temple period, where thousands of pilgrims marched on their way to the Temple. There is no doubt that there would have been extensive trading here. This is evidenced by the many weights and bronze coins we have found here. But to find a rebel coin made of pure silver is definitely very special and exciting.” 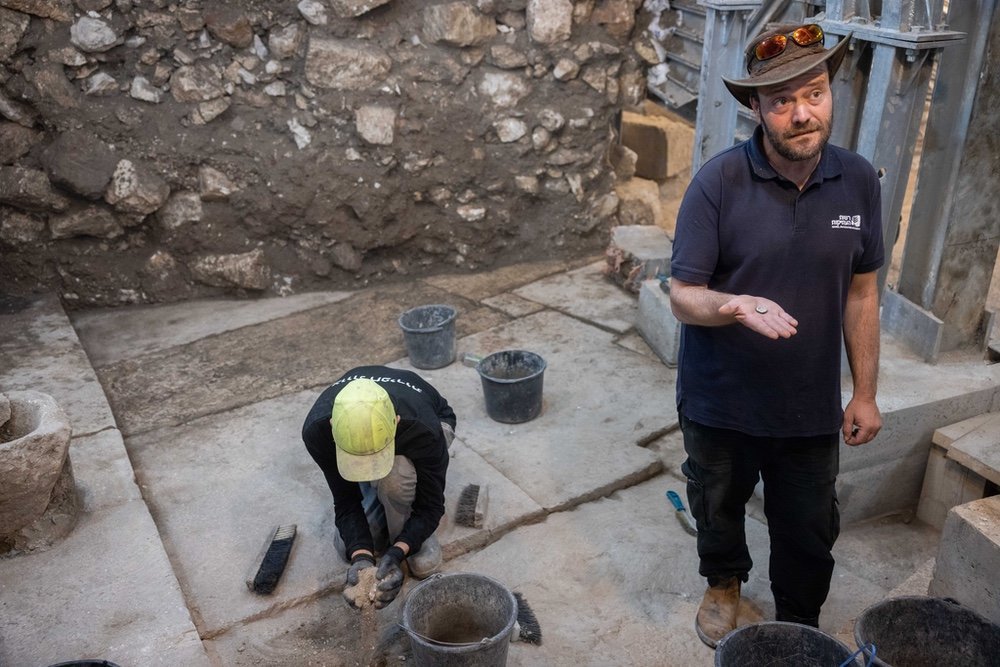 IAA archaeologist Ari Levy standing with the coin at the site where he and colleagues are uncovering the ancient “Pilgrimage Road” in Jerusalem. Yonatan Sindel/Flash90

Dr. Kool theorizes that the silver from which the coin was made came from the plentiful silver reserves in the Temple, and that it was minted on the Temple Mount plaza – possibly by one of the priests, who worked in coordination with the rebel leaders and assisted them. Where else could you find silver in such quantity and such high quality in those days? Only in the Temple. “If so, we can say with caution that this coin is, apparently, one of the only items we can hold today that originated on the Temple itself.”

Dr. Amit Re’em, Jerusalem District Archaeologist of the Israel Antiquities Authority added, “This inscription, revealed that the famous Colosseum we all know in Rome, was built by the Romans from the spoils of the Temple looted from Jerusalem. It reads: ‘Emperor Vespasian (who, along with his son Titus, suppressed the Jewish Revolt and destroyed the Temple) ordered the construction of this new theater amphitheater (the Colosseum) from his share of the spoils.’ One can only imagine the extent of the loot and the amount of money the Romans found in the Temple storehouses.”

As part of the excavation, the archaeological earth was sent for wet sifting in the Emek Tzurim Sifting Project, and the person who was privileged to discover the find was 11-year-old girl Liel Krutokop from Petah Tikva, who came with her parents and sister to do archeological sifting at the City of David. “We poured the bucket with the dirt on the strainer, and as we filtered the stones that were inside, I saw something round.” This is how the girl described the exciting moments of exposing the rare find. “At first, I did not know what it was, but it looked different from all the other stones. My father brought it to one of the assistants, and she showed it to an archaeologist. He looked at it and said it was a silver coin that needed to be cleaned. I was very excited.” According to the girl, “When I got to Emek Tzurim I thought there must be simple coins in the buckets, but I did not think I would find a coin myself, and certainly not such a rare coin from pure silver. I was lucky to find it, but I also want to say thank you to my sister for choosing the bucket we sifted. If she had not chosen this particular bucket, I probably would not have found the coin.”

Eleven-year-old Liel with the coin she discovered

The coin, which was sent to the laboratories of the Israel Antiquities Authority, underwent a chemical process for cleaning, and recently, upon completion of the process, the significance of the find became clear.

According to Dr. Kool, “A currency is a sign of sovereignty. If you go into rebellion, you use one of the most obvious symbols of independence, and you mint coins. The inscription on the coin clearly expresses the rebels’ aspirations. He said,” The choice to use ancient Hebrew script, which was no longer in use at the time, is not accidental. The use of this script came to express the longing of the people of the period for the days of David and Solomon and the days of a united Jewish kingdom – days when the people of Israel had full independence in the land.”

According to Eli Escosido, Director of the Israel Antiquities Authority: “I was happy to see the excitement and curiosity that gripped Liel when finding the rare coin. It has importance for understanding the minting of coins, which I am certain she will share with her friends and family. The Israel Antiquities Authority considers the connection of the younger generation to our heritage, in an experiential and unmediated way, a top priority. Our educational center will come to Liel’s class, mint coins, and share the importance of the find with her friends.”

The rare coin will be presented to the public during Hanukkah at Emek Tzurim National Park in Jerusalem at the City of David and the National Parks Authority. The public is invited to come and participate in the “archeological sifting experience” that takes place there.

From a press release by the Israel Antiquities Authority, the Israel Parks Authority and the City of David Foundation.