Since the outbreak of the coronavirus, which was first reported by the Chinese government in Wuhan on December 31 to the World Health Organization, several accounts of racism and xenophobia related to the menacing COVID-19 disease have been reported and documented in social media around the world.

Last week in an incident that happened to one Bnei Menashe youth, Jews who have come to Israel from India, is an example to racially motivated hatred and fear.

A 28-year-old, Am-Shalem Singson, is living in Tiberias for the last two years after he make Aliyah in 2017 with his widow mother Bat-El Singson and three elder brothers. Am-Shalem is a young religious Zionist studying in Hesder Yeshiva in Maalot in preparation for military service in the Israel Defense Forces.

On the fateful Saturday night, Am-Shalem Singson was on his way to a friend’s house in downtown Tiberias. Singson said he was walking past two men on the street when one of them looked at him and yelled, “Corona- corona” and “Chinese.” 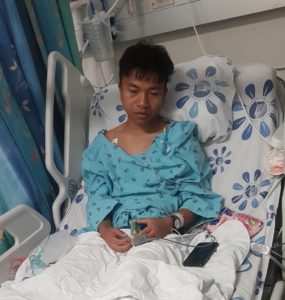 Am-Shalem Singson at the hospital in Tiberias.

“I was stunned and turned around to have a look at the man who made the comment,” said Singson from his hospital bed. “I said to him that I am not a Chinese, but a Jew from India’s Bnei Menashe community, nor is there any justification for relating to someone who has an Asian face and color with the coronavirus. But the man then punched my face multiple times and kick me hard in my chest,” he said.

Singson was later hospitalized at Baruch Padeh Medical Center in Tiberias. He suffered severe injuries to his chest and lungs and had undergone minor surgery. He is now convalescing and considered to be in stable condition. The city’s Metropolitan Police department of Tiberias is now investigating the case.

Immediately there was press release from Shavei Israel, an Israel-based Jewish outreach organization that locates and assists lost Jews and hidden Jews around the world with Aliyah, including the Bnei Menashe from northeast India.

“Shavei Israel is stunned by the vicious and racist attack on Am-Shalem Singson in Tiberias. The Bnei Menashe are our brothers and sisters, and anyone who raises a hand against them must be brought to justice. I demand that action be taken and I call on the police to investigate the incident immediately. The coronavirus does not distinguish between different types of Israelis based on their skin or the shape of their eyes and neither should anyone else” said Michael Freund, founder Chairman of Shavei Israel.

The issue has sparked a debate about forming a kind of common Bnei Menashe organization aimed at providing the community with a platform to redress their grievances and find ways to tackle their social problems. To many Bnei Menashe who once thought Israel isn’t racist, but one Jewish race and nation, is now in the thought process of “think again.”

The story of Am-Shalem Singsong is not the first time that racism has occurred as a consequence of the global pandemic coronavirus. Since the beginning of the coronavirus outbreak, many Bnei Menashe community’s members across the country in Israel described a rising and uncomfortable level of prejudice and racism against them.

The coronavirus pandemic has led to increased violence, discrimination, demonizing, xenophobia and racism against people based on descent and appearances. Some governments and politicians have denounced such incidents related to the outbreak of the disease. Last week, Michelle Bachelet, United Nations High Commissioner for Human Rights, called on member states to combat discrimination and violence triggered by coronavirus.