Comic books and graphic novels don’t have quite the appeal in Israel that they do in the US, Japan or France. Only a handful of Israeli graphic novels have been published, among them Waltz with Bashir by Ari Folman and David Polonsky, which was turned in an award-winning animated film in 2008. Waltz with Bashir was also nominated for the Academy Award for Best Foreign Language Film.

Israeli critics said the graphic novel-turned-feature film received so many awards because of its obvious anti-military/anti-Israel plot. This is not surprising considering that Israeli artists long ago learned that being anti-Israel gives a better chance for fame, and have played the harp accordingly, either cynically or because they genuinely resent what Israel stands for, or both. 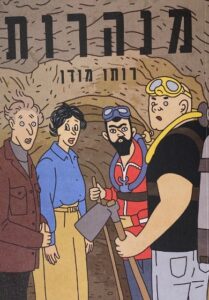 Tunnels, the new comic book by Rutu Modan, falls into the same pit of anti-Israel art, though in not quite so blatant a manner. Tunnels is about an archaeological quest for the Ark of the Covenant that includes forgery, international intrigue, occupation, idiotic settlers and soldiers, proud Palestinians, and a gay love story between a Jew and a Palestinian – a recipe with all the “proper” ingredients.

The eponymous tunnels are Jewish and Palestinian tunnels running underneath the infamous security wall. The Palestinians are digging a tunnel to smuggle goods and explosives. The settlers are digging a tunnel to find the Ark. The tunnels of the two groups cross one another, and both parties grudgingly agree to cooperate for the sake of huge financial gain. The digging site happens to be on the Palestinian side of the wall, which is nevertheless still part of the historic and of Israel. This makes the Ark of the Covenant both Israeli and Palestinian, depending on who finds it first. 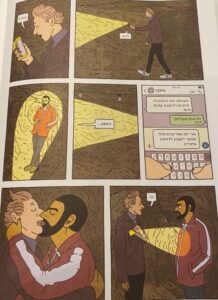 To make a long story short, the Ark is found by archaeologist Motkeh Sarid, who gets separated from his group when a tunnel partially collapses. Popping up with the Ark on the Palestinian side of the wall, Sarid is confronted by two ISIS-like terrorists ready to behead him. To avoid the risk of the Ark being taken away, and to save his life, Sarid quickly recites the Shuhadah and becomes a Muslim. He then finds himself in a remote terrorist camp, watching the Ark being placed on a pile of rocks on top of which is the black ISIS flag.

One can’t miss the point of the last picture that concludes the book. Those Jews looking for the Ark are the counterparts of ISIS, and the Ark is where it should be, guarded by a converted Jew in a remote camp of dangerous religious fanatics. Modan is clearly revolted by Israel’s most sacred object, which she sees as radiating negativity on every Jewish thing, including the Land of Israel. 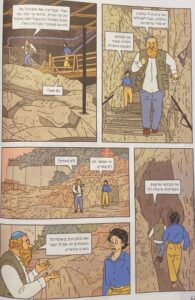 Bottom left: Gedanken, the settler archaeologist, breaks it to heroine Nili that “the territories are the Land more than the land (meaning the State of Israel).”

There are plenty of clues in the book revealing Modan’s disdain for Israel, which were also disclosed in a Haaretz interview published on September 9. “One of the saddest things I discovered when I began studying history [she needed this to write the book] is that historical Israel was in the territories,” she said, referring to Judea and Samaria. Just to make sure this is understood, 54-year-old Modan never knew until now where historic Israel was located. “King David and Moses and Solomon and Joshua,” she continues, “they all lived there, and therefore that’s where most of the interesting things are found.” And please, being a novice, give her a break here with Moses living “there.”

This discovery had a heavy impact on her, and Modan concludes by stating that “for me this was one of the most difficult discoveries. I understood that because of this the settlers will never give up these territories. I understood that it’s not that we’re fighting here over the Land of Israel and it has to be divided somehow between us, but that we’re fighting over the exact same territory because that’s where everything was. This whole idea of historic rights,” she continues, “I personally have big doubts about … but if we do have a historic right to something in this land, then it’s there. And that’s awful, it’s really tragic.”

If there’s anything awful and tragic here it’s that a Jew born and raised in Israel has absolutely no clue about who she is. Her name, “Rutu,” which unlike most Hebrew names means absolutely nothing to Israelis, is therefore rather fitting. 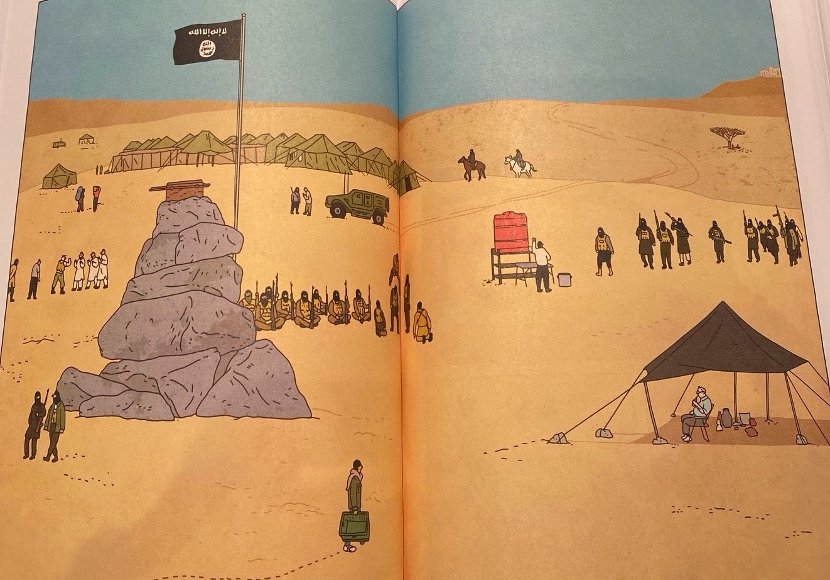