Prior to the ceremony, those honored met with the President, the Prime Minister and the head of the GSS (also called Shin Bet and “Shabak”) privately.

Afterwards, in a ceremony attended by the families, the certificates of excellence were awarded. Those awarded are both veteran and younger GSS employees in various positions who perform their role in the Shin Bet in an exceptional manner while realizing the organization’s mission and values.

“Y” who works at the “Israel and abroad desk” is a married mother of three. She took care of a joint goal together with other bodies of Israeli defense through unique, unusual cooperation among intelligence organizations in Israel and abroad. During the cooperation, she led to the realization of groundbreaking intelligence activities that thwarted a significant threat to the State of Israel. 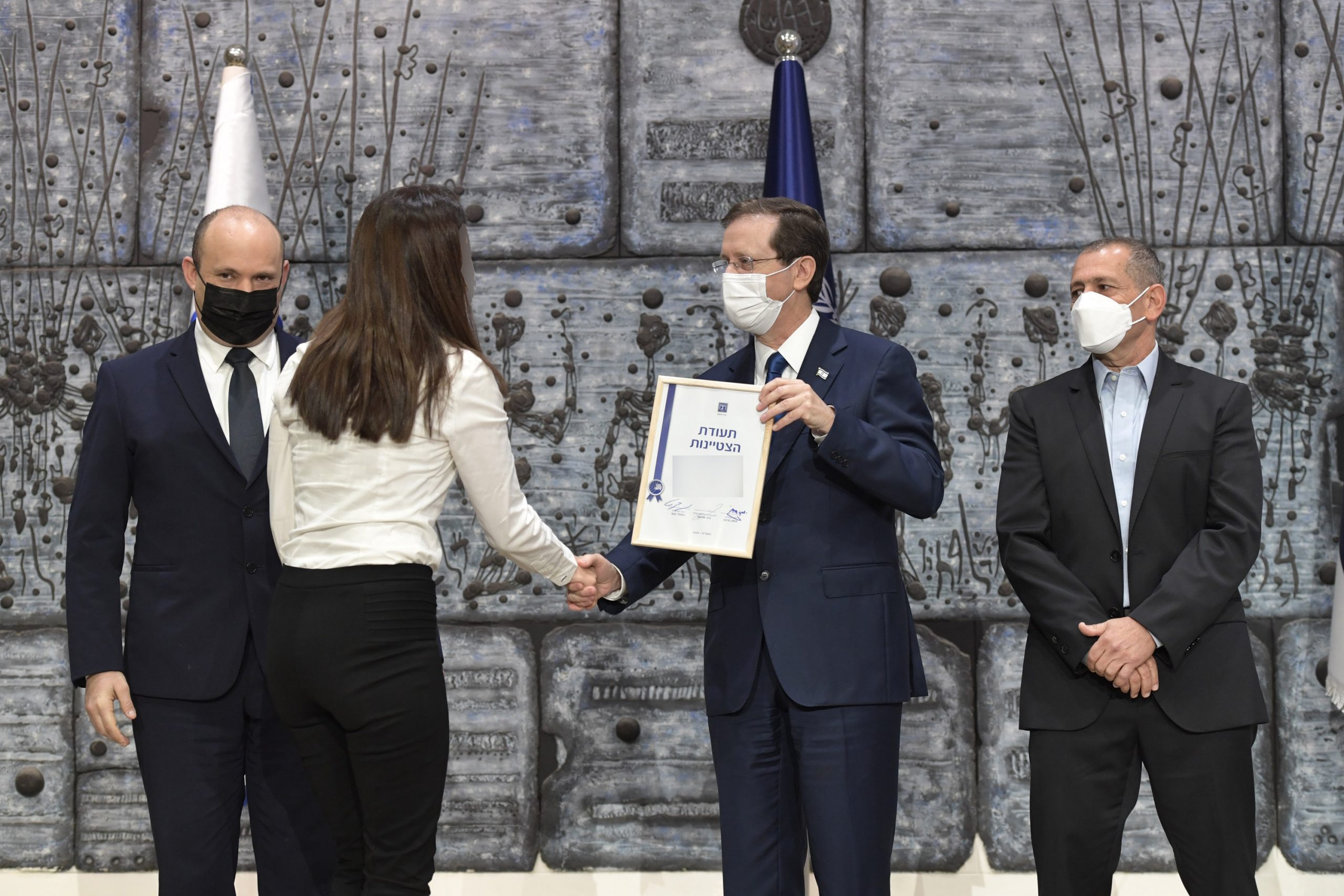 Receiving an award in recognition of classified, secret accomplishments to defend Israel’s security.

“A” is a fighter in the operations unit, married and a father of three. He took part in a number of daring, sensitive and unique operations in enemy territory, for which he received an extraordinary decoration. He had a significant impact on the achievements of the organization’s operations unit. This was done with fellow employees, in a combination of doggedly sticking to the goal, thinking and analytical abilities, and a personal example that affects others around him.

“Z” is a content expert in the realm of computerized security, married and a father of three. He led activities that crossed organizational boundaries and provided a significant operational response to threats to the world of shipping security. He formulated a technological solutions for dealing with complex threats in distant arenas. He led groundbreaking changes in everything related to securing the border crossings of the State of Israel.

“S” works at the ​​Jerusalem, Judea and Samaria desk. She is a mother of two. She led intelligence activities to thwart a broad terrorist infrastructure of the Popular Front organization in Ramallah-Binyamin. This activity led to the exposure and thwarting of dozens of terrorist attacks in a variety of ways. In addition, her actions caused significant damage to the terrorist organization’s financing and rehabilitation capacity and to its ability to carry out terrorist activities against Israel.

“R” who has worked in the GSS for 25 years, is married and has four children. He is a great source of knowledge for the Israeli intelligence community in the field of technology for operations. R serves as an engineer in a unique area of expertise. For more than two decades he took part in the design and construction of counterterrorism tools, and was an active and dominant partner in dozens of counterterrorism operations. At the same time, R developed new technologies and ideas for ground-breaking techno-operational products, solutions that were implemented in the organization’s most secretive operations.

“T” is married and the father of six. He operates agents in the Anti-Spy Division. He is responsible for recruiting and operating agents in complex targets through which high-quality and high-value intelligence is obtained for the intelligence community.

In addition, the Lifetime Achievement Award was given to “A”, married and a father of three. He is responsible for organizational well-being, and has made a unique contribution to the organization, its employees and their families, “Spirit-Building”. He performs his sensitive and unique role out of a true sense of mission. He performs his work out of a value-based, deep-rooted connection to the purpose of the GSS. He is retiring after 27 years of service in which he worked with dedication flawlessly for the benefit of the security of the state and the well-being of the organization’s employees.

Israel’s President Yitzhak Herzog opened his speech with congratulations to the outstanding men and women: “You are the best of the best – the most outstanding of the outstanding general security service. Our spearhead. If you will ‘the tip of the spearhead.’ You have made excellence a habit and a way of life. You invest daily and hourly efforts in maintaining the security of the citizens of the State of Israel. Thanks to you, we have a professional, effective General Security Service that prevents threats on a regular and systematic basis. You preempt our enemies and isolate those who seek to do us harm.  In your work you save the lives of many citizens, and we, all the citizens of Israel, owe you a great debt, and a big thank you. ”

The President added: “The GSS achievements in the war on terror are the true medal of honor, saving the lives of the citizens of the State of Israel, and preventing disasters on a scale that is difficult to describe. When I read about your deeds – the outstanding ones, for which you today receive the award of excellence, I almost stopped breathing. The impact and contribution of these actions is incalculable. Some of you are working in the field and some are behind the computer monitor. You are all giving it your all. You all work with dedication and determination. And always under the iron rule: ‘The Unseen Shield.’ Away from the public eye. You demonstrate boldness, originality. These days, when everyone is talking now about the new James Bond movie, you don’t need to see James Bond. James Bond can learn from you.”

“On the shoulders of the General Security Service rests perhaps the most sensitive of missions. You are responsible for maintaining the security of the state but also the rule of democracy and its institutions. This is a difficult task. These days the alienation is deepening day by day, between individuals and groups. Everyone and every group and every side, is fortified in its positions and views. Mutual honor is stricken in the face of polarization. The task becomes even more difficult. In this task of maintaining the order of the democratic regime we must be careful. We must be careful not to interfere too much, God forbid, but we must not be defeated either. Also in this mission, as in every mission, you are our emissaries… Under supervision of elected officials, but also with our full confidence, with the necessary and important backing. We must all do our part to succeed in this endeavor. ”

Prime Minister Naftali Bennett added: “I would like to thank the GSS, which has once again embarked on a national mission – the fight against the rampant violence in the Israeli Arab society. It is important to say that the GSS involvement will be limited to areas that do not create tension with its purpose in the law, and connect to its relative advantage. One of the great things about the General Security Service is that you always stand up and say: ‘Here am I.’ There is nothing above or below your honor. You always get involved in the task. Whether it’s Corona, or now a new national mission – you get in the harness and stand firm. ”

The head of the General Security Service, Nadav Argaman, said: “Excellence is a central and leading value for us. We have to function in a complex environment. ​​In the face of changing threats and in the face of hostile factors. And their level of sophistication only increases and improves. The battle we are facing is an unending war. Most of it happens out of sight. This is a war we must not lose. What is at stake is the security of the state and its citizens and the protection of Israeli democracy. This is a very challenging campaign. It requires of us the highest level of wisdom, innovation, courage, determination and initiative. There is no way to achieve this, without the best people. The outstanding ones we cherish today, are the best of the best. In my name, in the name of GSS and in the name of the State of Israel: Thank you for everything you are! ”

“A” the representative spokesperson for those awarded, added: “We come from different sectors and different areas of practice, but we all have something in common. It is not our biological DNA, but the very special service DNA of our organization. The same DNA characterizes GSS workers to have an unparalleled sense of mission… Strive to engage the enemy, decipher and thwart, even if it is dangerous – so that the purpose of the GSS is realized – prevention of harmful incidents in advance. When most of the people of Israel are enjoying their weekends and holidays, GSS workers do not rest – for example until the last of the six terrorists was caught and returned to prison. We carry out waves of dangerous preemptive arrests, side by side with the Israeli commando fighters in Judea and Samaria, in order to thwart Hamas’ infrastructure. In such moments the heart is filled with immense pride as a GSS worker and as a citizen of the state. ”