Addressing an audience of Christians and Jews at The Jerusalem Prayer Breakfast on June 2, former US Ambassador to Israel David Friedman spelled out with refreshing lucidity, and trenchancy, some things that I have often wanted to say “to Israel,” but found hard to.

And, describing a movie he is making with his former Trump administration colleague, Secretary of State Mike Pompeo, he showcased an effective way Christians can “work with Israel and with God” — as Friedman put it — to the good of the Jewish state and its future.

This unapologetically proud son of Israel got right to the point. I have told Israelis, he said, that “it’s time for Israel to grow up.”

“Out of the 190 nations in the United Nations — more than half of them are younger than [modern] Israel. Israel is a ‘big country’ — not geographically, but it’s a mature country and in almost every area it punches way above its weight.”

It was past time, Friedman said, for this nation to decide for itself the boundaries of its land.

If Israel does not decide this, he said, “and some other nation — whether it’s the United States or some other world body or the Quartet — if anybody else decides this issue for you [Israel], shame on you, and you won’t be happy with the outcome.”

This Jewish American then described how he and Pompeo, a devout Evangelical, are working together “from the outside” to help create a national consensus in Israel that “there is no basis by which the holy sites of the Jewish people and of the Christian people cannot be a part of the State of Israel.”

Israel has to come to see this, Friedman said. It isn’t about politics, it’s about faith. 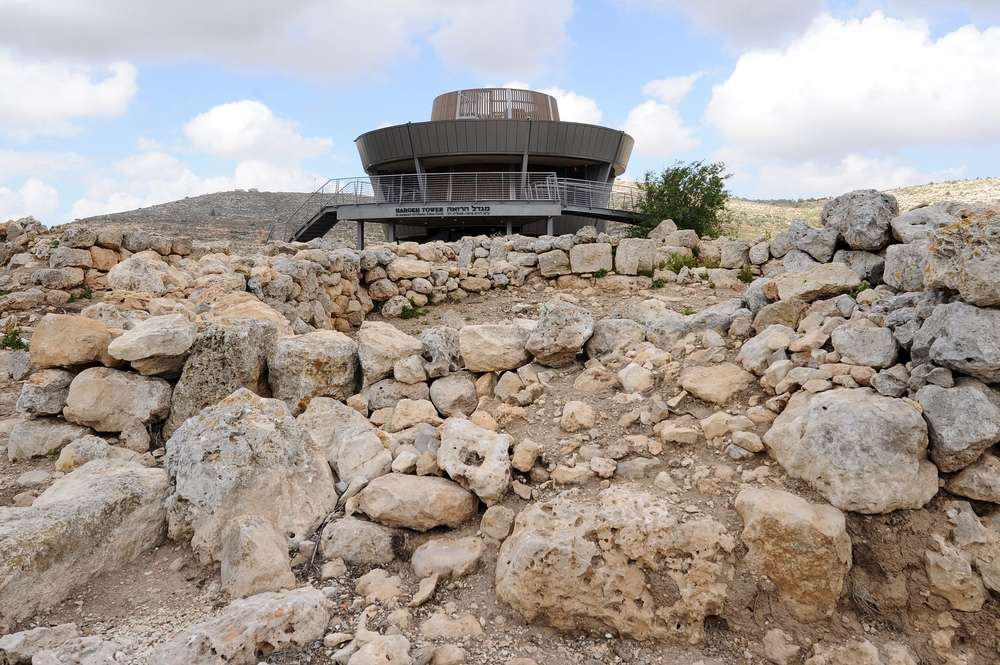 A visitors center at the place where the Biblical Tabernacle stood for hundreds of years at Shiloh in central Samaria. How could this location NOT be part of the prophesied restoration of Israel? Photo: Mendy Hechtman/FLASH90

Speaking “Land truths” to Israeli power as a Gentile isn’t always easy. Some 10 years ago, at a reception hosted by the Knesset Christian Allies Caucus in Jerusalem, I approached then chairman, MK David Rotem z”l, with a question:

“There are millions of Christians who believe that the land-for-peace policies being pursued by Israel are dangerous to the Jewish state,” I said. “What can we say to urge your government not to continue down that road?”

He nearly bit my head off. “You have nothing to say to our leaders. You need to talk to your governments!” he barked, then added that it was unrelenting international pressure that had squeezed Israel into entering the disastrous “Land-for-Peace” process in the first place. If Christians truly were concerned, they would confront the destructive and prejudiced anti-Israel policies practised by their own politicians.

Rotem’s words resonated. When, in 1991, I covered the first International Middle East Peace Conference in Spain, I saw how the US blatantly blackmailed Israel and dragged it to the event against its will. I also saw for myself, as I rubbed shoulders with thousands of other reporters in the press centre in Madrid, how completely the world’s media embraced and propagated the false Arab narrative of the “Palestinian-Israeli” conflict, and belittled and deliberately dismissed the factual Jewish one, as they have done without letup to this day.

On the long and painful journey since Madrid, Israel has been unceasingly coerced into continuing with this “peace process.” Called consecutively Oslo 1, Oslo 2, the Roadmap, Annapolis and the Two State Solution (it’s all the same thing), it is a path which has been proven from its illegitimate conception over three, blood-filled decades ago, to be morally, militarily and strategically bankrupt — a “covenant with death” going nowhere but to the graveyard of hundreds and hundreds of Jews murdered as a direct result of this process, and indisputably endangering the Jewish state.

Led by “the great United States,” our Gentile nations have been and are complicit in nothing less than a combined effort to rob Israel of Samaria and Judea, and raus! the Jews who live there. Rotem was right. We should long, long ago have been hollering at our presidents and prime ministers, secretaries of state and foreign ministers: “Stop! Stop thief!!”

At the same time, for the few non-Israelis who have tried to challenge and denounce these land grabs, a kind of conviction has grown — rightly or wrongly — that nothing we say to our leaders will make any difference. There will never be a positive reception to this call; our once Judeo-Christian nations long ago cut the moorings to their roots.

Virtually the only exception on the stage of world leaders in the last 55 years was President Donald Trump, who made more powerfully positive policy decisions regarding Israel than all other US presidents combined. Those who know the crucial consequence the restoration of Israel holds for the destiny of all mankind understand the wall-to-wall hatred of that man as a measure of the international community’s resolve to have its way with Israel’s land, and to crucify anyone who tried to stop them. (As I write, that execution effort is intensifying ahead of the 2024 presidential election, for fear that Trump may run, and win, again.)

Israel’s leadership, on the other hand, generally “feels” more approachable to us non-Israelis. As Bible-believing Christians, we have common cause with the Jews. After all, we have faith in their God, and in the same promises contained in the same Scriptures (or at least in the first two-thirds of our “Christian” Bibles). And because we “share” God, we — Jews and Christians — can connect with what He says regarding the Land, its ownership, and His redemptive purposes with it.

Still, most pro-Israel Christians struggle when it comes to relating and responding to decisions made by Israel’s governments that are antithetical to what appears best for the state’s physical and spiritual security.

We are acutely aware of how Christendom for centuries remained silent (or actively participated) when hateful forces rose up to destroy the Jews. We know that the same spirit that drove Hitler and his numerous Jew-hating historical predecessors, is manifesting today in and through the Zion-hating Arab Middle East and the secular progressive post-Christian West. We are resolved not to be silent again, but to shout it from the rooftops when we see the Jewish people in their Jewish homeland facing an existential threat.

And a State of Palestine in Judea and Samaria poses every bit as existential a threat to Israel as does a nuclear-armed Iran.

But back to David Friedman who, concluding, helped point the way:

Israel is “where our collective [Jewish and Christian] faith began and where it continues to live and survive. It’s the faith that makes Israel the great country that it is. Without faith as the core of our support for Israel, Zionism is kind of irrelevant.

“We’re not going to fight this fight on the basis of politics. We are going to fight it on the basis of faith. … We need to help people care about Israel from its Biblical and historical perspective. These sites and places are essential to the Jewish faith and to the Christian faith — and that is the argument I believe we will win; because people can argue politics until their heads explode but no one can argue the Bible — no one wants to pick a fight with God and that’s the fight that we ought to be fighting alongside of, because it is the fight we will win.”