While our political parties are getting themselves ready for the upcoming election on March 23, Israeli political commentators continue to divide the political map into two blocs, the “just-Bibi” and the “just-not-Bibi.” This is no doubt an accurate portrayal, with even some right-wing parties joining the anti-Bibi camp, such as Naftali Bennett’s Yamina and Gideon Sa’ar’s “New Hope,” which polls give 12 seats and 15 seats, respectively.

Sa’ar, who says that under no circumstances will he join a government headed by Netanyahu, is particularly interesting because, while disqualifying Netanyahu (and his voters), he is not ruling out joining a left-wing government. And that would be no small feat considering two most recent political events: The election of Merav Michaeli as the new head of the Labor Party, and the merger of the right-wing National Union party of Bezalel Smotrich with the Otzma Yehudit faction of Itamar Ben-Gvir. These moves show that the division into pro- and anti-Bibi blocs hides something far more troubling than just personal dispositions toward Netanyahu.

Michaeli is a radical feminist who represents a profound break from the historical roots of the Labor Party, but that would require a separate article to fully explain. Suffice it to say that Michaeli is a progressive activist on steroids who has gone on record denouncing the traditional family unit. And with her at the helm, there is now a place in Labor for people such as fanatic pro-Palestinian activist Ibtisam Mara’na, who in an August 2012 Facebook post bragged about continuing to drive during the Holocaust Remembrance Day sirens, when nearly all Israelis stop everything they are doing and stand in solemn silence. For Mara’ana, it was a “wonderful two minutes” on the road.

As her Facebook page reveals, Mara’ana harbors no regret for her slurs, which include unbelievable hatred of Israel. Yet, instead of booting her from the party, Michaeli holds Mara’ana aloft as a symbol of coexistence because she happens to be married to an Israeli, who, speaking of monstrosities, is also the son of a Holocaust survivor, and because she ostensibly stands against all forms of violence (though not against comparing Israel to Nazi Germany). Among other things, the welcoming of Mara’ana to the “wonderful team” of the Labor Party shows that it has morphed into an anti-Zionist party, a necessary byproduct of progressivism.

To be sure, Mara’ana is not an isolated case. Yesh Atid, which according to polls will be the second largest party with 17 seats, has said time and again that it sees the Joint Arab List as a legitimate partner worthy of being part of a left-wing coalition. This again shows that the just-not-Bibi bloc prefers anti-Zionists over right-wing Zionists. This was played out on Wednesday, with the fire and brimstone poured over the head of Itamar Ben-Gvir, who in the eyes of the Left embodies everything vile, from racism to homophobia and everything in between.

If Michaeli is a progressive on steroids, Ben-Gvir is a Zionist on steroids. As a former follower of Rabbi Meir Kahana, who advocated transferring the Palestinians to other countries, Ben-Gvir is seen as the nemesis of the Left, which appealed to the Supreme Court to bar him from running for Knesset. Hard as it tried though, the Supreme Court could find no reason to disqualify Ben-Gvir (although it did disqualify two candidates from his party).

Nevertheless, the Left sees the possible presence of Ben-Gvir in the next Knesset a sure sign of Israel becoming a fascist state. Two tweets from Thursday illustrate this divide between the two blocs, which I view as Zionists and anti-Zionists. The proudly homosexual head of the Meretz party, Nitzan Horowitz, tweeted the following: “Every time I see this nauseating bunch of homophobic Kahanists who Netanyahu tries so hard to bring into the Knesset, I am more convinced of two things: How corrupt this man (Netanyahu) is, and how important our party is … that will forever fight them…”

Historian and former leftie Gadi Taub retorted: “But homophobes in Arab parties are cool, right? And anti-Jewish racism in a Communist party is progressive, isn’t it? Oh the Left … that lectures us with its principle-less rag of ideas because it thinks of itself as enlightened. Enough, enough with your supposedly moral bluff.” 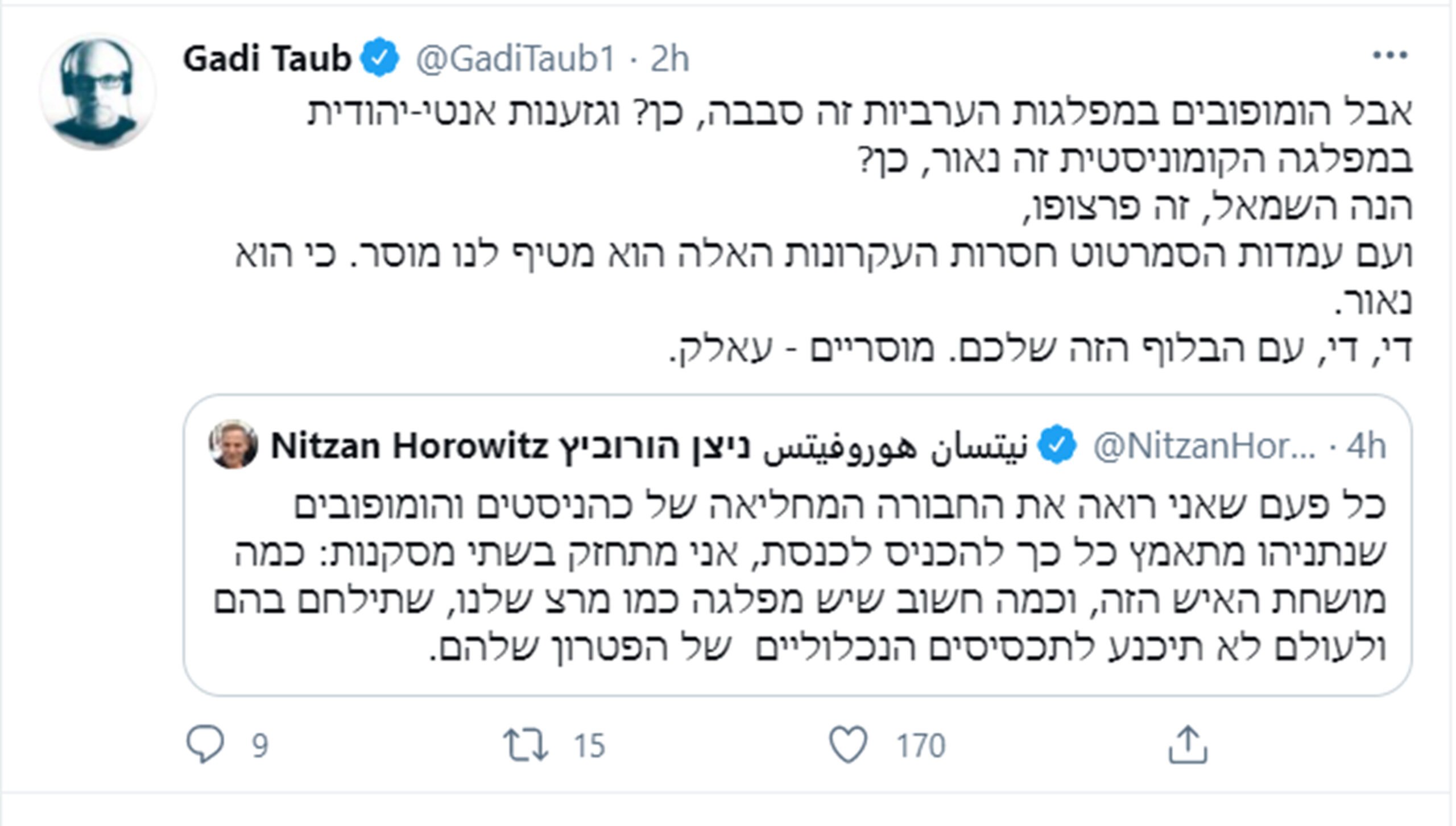 Taub is not alone in seeing the “bluff.” An increasing number of Israelis are seeing it too, which explains why despite the relentless campaigns against Netanyahu, whose press conferences are not seen on our TV news channels, the Zionist just-Bibi bloc still stands a better chance of actually winning the election.