A respected Kuwaiti newspaper called Al-Qabas, considered in Kuwait and in the Arab world as being one of the leading and most important news publications, has fired one of its reporters for interacting online with our very own Arab affairs correspondent, Edy Cohen, and calling for peace and coexistence with Israel.

The entire affair began when Cohen tweeted about a group of Jews who have been invited to celebrate Passover this year in Saudi Arabia. Jasem Aljuraid, a journalist for Al-Qabas, responded by congratulating Cohen and inviting him to meet in Kuwait:

“We are pleased to see the progress in Saudi Arabia in inviting Jews there. Congratulations my friend, hoping to see you in Kuwait soon.” 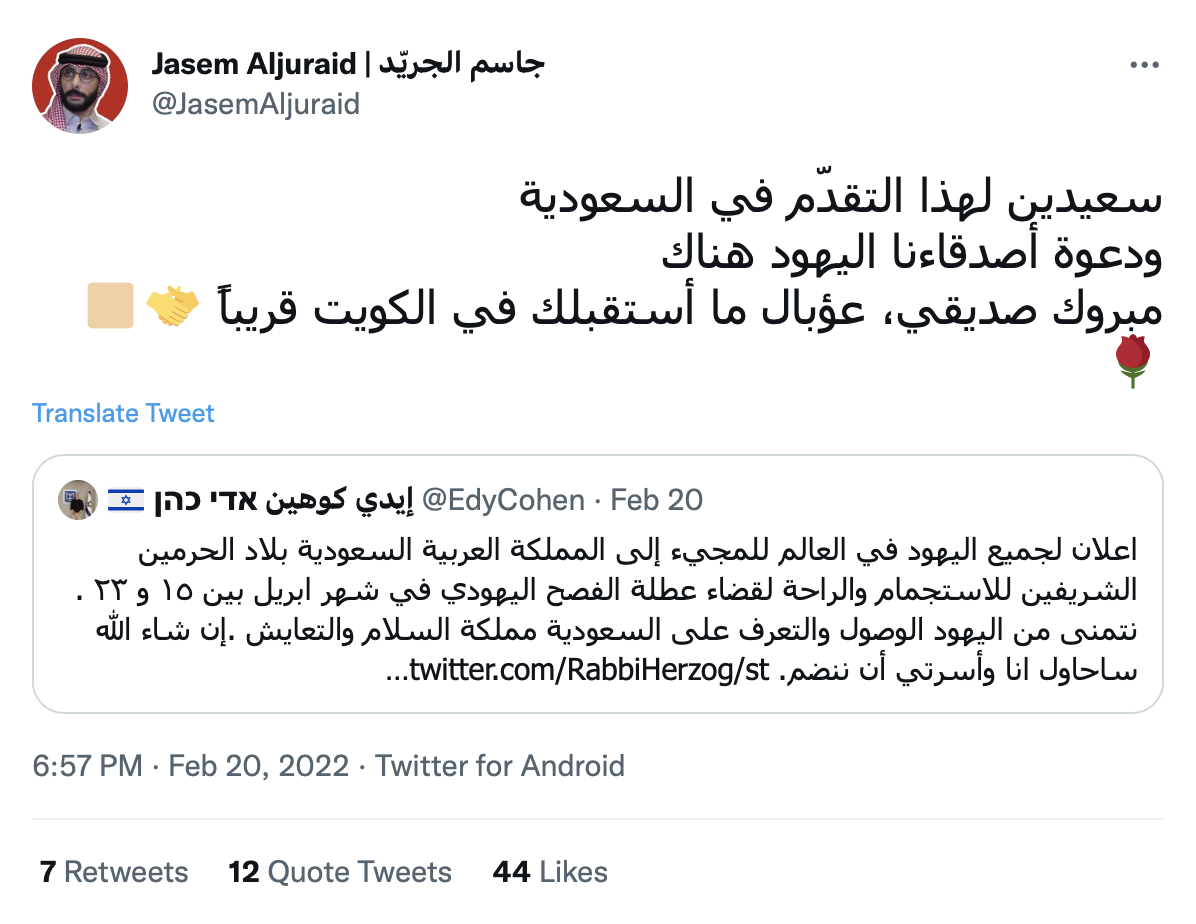 Aljuraid’s tweet expressing joy at Jews being invited to spend Passover in Saudi Arabia and expressing hope of hosting Dr. Edy Cohen in Kuwait provoked unprecedented outrage among many in the oil-rich Gulf state.

Following this exchange, a group of extremists affiliated with the Muslim Brotherhood in Kuwait pressed the issue and called for the dismissal of the Kuwaiti journalist by boycotting the newspaper for which he writes.

Hundreds sent in screenshots of the tweet and canceled their subscriptions.

“The Zionists in Kuwait must be boycotted, the first of which is Al-Qabas #مقاطعة_القبس Please educate them so that they do not go too far and demand normalization [with Israel] on their cheap pages.”

Some responded with images setting the journalist against the backdrop of an Israeli flag, thus accusing him of being a “Zionist.”

In the end, the public pressure succeeded and the newspaper’s management to fire Aljuraid. The official notice of the decision was also posted to Twitter, along with an image demonstrating the newspaper’s commitment to the Palestinian cause:

“Al-Qabas affirms its steadfast and firm stance towards the miserable #العدو_الصهيوني (#The Zionist enemy) crimes, and its full support for the valiant Palestinian resistance.

“And it announces the removal of one of the opinion writers who called for normalization with the Zionist enemy, on his social media accounts.”

It is important to note that Aljuraid hailed normalization with Israel via his own personal social media accounts, meaning it was his own opinion and not attributed in any way to the newspaper. He was fired nevertheless.

Kuwait remains one of the least open countries in the Gulf region. There is no freedom of expression, only oppression. For example, several years ago a Kuwaiti man was sentenced to 10 years in prison for a tweet that allegedly “insulted Islam.”

See more of our articles on Kuwait’s questionable behavior: