Witness the Bible come to life on a tour taking us back thousands of on a journey of unparalleled depth into the historical course of ancient Israel, the birthplace of the Bible!

On this unique tour we look behind the scenes of the lives of the patriarchs Abraham, Isaac and Jacob, as well as kings, queens and the ordinary people of ancient Israel. We discover foods they ate, their lifestyle and even original Israeli technology! Beliefs and customs often hidden in biblical passages come alive as we see firsthand the unique findings scattered through the most extensive holdings of biblical and Holy Land archaeology in the world!

See the full tour recording below ↓ 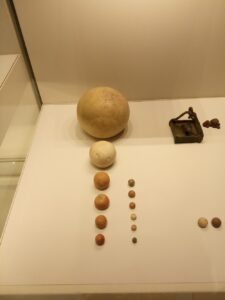 Ever wonder why everyone thinks Eve was eating an apple in the Garden of Eden? Didn’t they cover themselves with a fig leaf? While looking at a jar full of preserved figs going back thousands of years, we’ll learn what kind of spices the ancients used in cooking and healing.

We accompany Hezekiah who witnessed the destruction of the northern Kingdom of Israel by Sargon’s Assyrians and was king of Judah during the siege of Jerusalem by Sennacherib in 701 BC. Knowing that Jerusalem would eventually be subject to siege, Hezekiah fortified the walls of the capital and hew an underground tunnel through solid rock that still brings fresh water into the city from a spring outside the walls almost 3000 years later!

Listen to the Prophet Hosea describe King Menachem’s drunkenness and debauchery implied in the words “he departed not from the sins of Jeroboam” (2 Kings 15:18 and Hosea 7:1–15) as the Books of Kings describe his rule as one of cruelty and oppression summarizing the “annals of the Kings of Israel,” (2 Kings 15:21).

These are just a few of the Kings and Prophets we explore together as we search for their royal inscriptions and seals are on display in rare archaeological finds from the Bible. 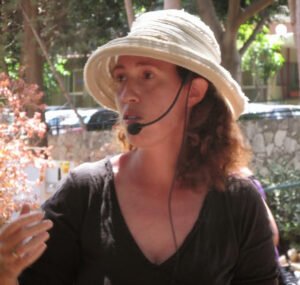 My parents made Aliya, immigrating from Philadelphia to Israel in 1963. I was born in 1970 and raised here as a “sabra.” That’s what native-born Israelis call themselves. I grew up hearing both English and Hebrew in my home.

My family – parents, 3 siblings and myself – always liked travelling and nature. Camping and hiking are a big part of my best childhood memories. As a teenager I joined a youth hiking club based in the Judean Desert. The club belonged to the Society for the Protection of Nature in Israel (SPNI). During our hikes we learned about the geology, biology and history of the places we visited.

I knew already back then that this is what I wanted to do with my life – hike in nature and visit fascinating places in Israel.

After graduating high school I did my mandatory service in the Israel Defense Forces. I was a gardener, and fiercely fought against all weeds in the army bases where I served.

After completing my army service, I completed “Land of Israel Studies” at the Beit-Berl Teaching College, receiving a B.Ed in geography and my official tour guide certification in 1995. I have worked as a tour guide ever since.