After that, things get messy. David’s life has some sharp edges, as does Michal’s. Let’s take a look at her life and try to glean some lessons.

“And Michal the daughter of Saul loved David” (I Samuel 18:20). This is one of the few times that the Bible emphasizes a woman’s love for a man. David has great charm, and many are attracted to him. Michal loves David, but we do not read of David loving her in return, at least not at the same level.

It seems love is blinding Michal, and will lead her on a journey that includes sacrifice and even tragedy. Michal so wants to be desirable that she becomes a “pleaser.” This weakens her ability to exercise judgment. When the desire to please is too dominant, in the end no one is pleased.

Three times the text mentions that Saul wants to kill David! David for his part wants to be part of the royal house. He wants to be the king’s son-in-law. We might see Michal as a kind of pawn in a chess game between Saul and David. Is she just a means to an end? 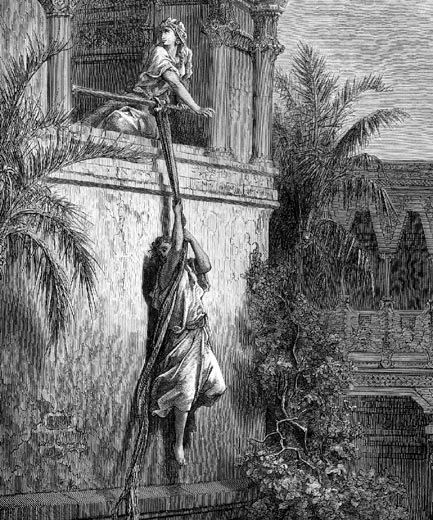 Michal risked her life to save that of her beloved David.

Next, Michal appears as a strong, active woman who rescues her hero husband against all odds. She understands what David doesn’t: King Saul wants to kill David. And this understanding together with a woman’s intuition transforms the personality of both. David becomes temporarily passive, and Michal becomes active. “And she went down… and took… and she placed…” (I Samuel 19:11-14). These action verbs show how much will-power and focus she needs to save her beloved.

In the first part of the story, Michal may seem to be only a delicate princess. In the second part, she is already true to herself. She is actively initiating. She uses all of her qualities, the same qualities that helped her get David now help her save him. She is willing to sacrifice her dream of an ideal family life, for David’s sake. She fools Saul’s messengers and helps David escape with his life.

Her intuition saves her beloved.

The woman’s intuition, often prophetic, is in quite a few Bible stories. Think of Rebecca, Rachel, Pharaoh’s daughter and others.

Yes, dear ladies, we should pay attention to the inner voice of intuition which is so often accurate and can give us foresight. [Just make sure it is not led astray by the emotion of fear.]

David flees for his life, and Michal remains alone. Even after Michal and David are separated in these tragic circumstances, we readers still hope for a happy ending to this love story. We hope that they will be reunited, that David will love Michal as much as she loves him, and that they will live happily ever after.

But we are disappointed. David marries two wives while he is a fugitive on the run from Saul! And in the meanwhile, Saul marries Michal off to another man (I Samuel 25:44)! Saul is expelling David from the royal house.

This intensifies the pain and our empathy towards Michal, who remains a tool in her father’s hands.

The demise of Saul, the rise of David

Then Saul dies. From the triangle of Saul-David-Michal, only Michal and David remain.

Even with Saul out of the picture, it is not rosy. David demands to have his wife Michal returned to him. It feels almost like she is property, an object. Love is not mentioned here.

At first she is the ladder helping David ascend to the royal palace. Then she becomes his escape rope from Saul. And now she’s the crown of the victor?

Does David think that in order to reign he must be the legitimate heir of Saul? Is that why he needs Michal?

In Second Samuel 3:15 we may see a hint that Michal is happily married to her new husband Paltiel, but he realizes that he has no choice in this power game. He must give up Michal. She is brought back to David to become one of his wives.

David rises to greatness. He arrives with the Ark of the Covenant, returning it to the Tabernacle in Jerusalem. He celebrates before God and Israel with dancing, not concerned with royal protocol and propriety. Michal watches David’s undignified dance out of the window and feels disgusted. She is quick to tell David he is making a mockery of himself. David answers harshly. Has he forgotten what Michal did for him when she saved his life?

Michal’s story ends like this: “And Michal the daughter of Saul had no child until the day of her death” (II Samuel 6:23). Since David has no children by Michal, no grandson of Saul will sit on David’s throne after him. Saul’s dynasty does not mix together with David’s.

After beginning as a fairy tale romance, the story of Michal soon incorporated strong currents of sacrifice and tragedy.

An overriding need to please

Rachel – one of the greatest Israeli poets – wrote a poem about Michal, expressing the depth and complexity of her character. One of the lines of the poem reads: “I often saw you looking out of the window.” We should remember other parts of her life as well, and not only the moment when Michal scorned David from the window. Michal is one of the most loving women in the Bible, but one of the least happy.

Some historic Bible interpretations thought the conclusion is that love is for men, whereas women should deal with having children, otherwise they will end up like Michal. But that is certainly not the lesson I want to learn from this story. My conclusion is different.

Michal’s pattern, the need to please people, even if loved ones, can work against us and cause our downfall in the end. That’s what happened to Michal. When we are dominated by the need to please, our expectations don’t materialize, and life is bitter.