Aviad Arik Herman (38), the international designer who designed Miri Regev’s “Jerusalem of Gold” dress for the Cannes Film Festival, was chosen to design the dress of the Miss Morocco finalist who will take part in the Miss Universe pageant on December 12th in Eilat.

Herman was also chosen to design the dresses of the beauty queens of Sweden, South Africa, Romania, Ireland, Japan and Spain. The queens and their dresses will be on display at the national costume competition, on the eve of the pageant’s festive final.

Herman has over a decade of experience in the Miss Universe competition, for which he has designed national dresses and costumes for Israel, Austria, Britain, Germany, Guam and Sweden.

The Miss Universe pageant features beauty queens from about 100 countries. The competition is watched by 600 million people from all over the world. It should be noted that Morocco is returning to the Miss Universe pageant after an absence of more than 40 years and now will be present in Israel. The choice of an Israeli designer surprised many and indicates the warm direction in which Morocco wants to take relations with the State of Israel.

“I am so proud of Kather Nahimi (the Moroccan beauty queen) and the Organization of Miss Universe Morocco that despite the threats and intimidation they decided to come to Israel and participate in the competition and even choose an Israeli designer for their participant’s evening dress. It is not in be taken lightly and for me it is a great honor to be help the contestant represent the popular and important Kingdom of Morocco. I am delighted that through my professional work I can contribute to strengthening relations and promoting normalization between Israel and Morocco,” Herman said.

This is a measure of closure for Herman. “My mother was born and raised in Tangier, which was a Spanish city in northern Morocco (today under Morocco’s sovereignty), and my grandmother worked there as a dress maker for flamenco dancers. I was very influenced and absorbed the affinity for fashion design and costumes and beautiful things from her. It is a great honor for me to return to my origins and connect Israel to Spain and Morocco through design and art.”

Herman added: “I am not a political person – I am an artist who creates and designs dresses. This is my talent and this is my specialty. In this big competition the whole world is important to me. It is important that the dresses I design make a statement and have meaning. When a beauty queen represents a country with a dress, she needs to express her culture and history. In the case of Miss Morocco, it is important for me to respect Morocco’s cultural and traditional richness, which is why I chose to design a particularly luxurious evening dress inspired by “Moroccan colors,” with a prestigious, majestic and spectacular representation of the traditional Kaftan.” 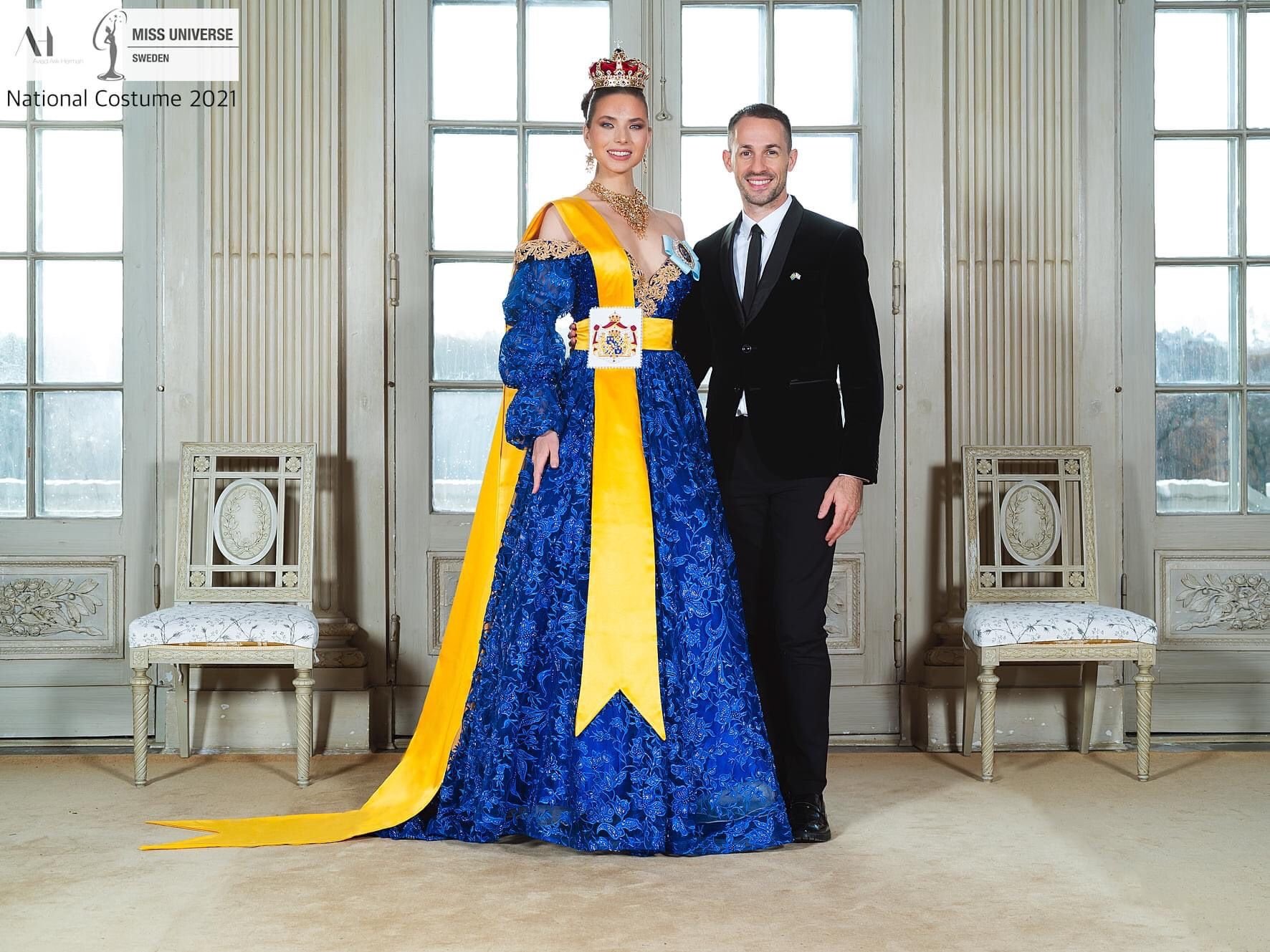 Herman with Miss Sweden in her gown for the national costume competition.

In South Africa, the government called on beauty queen Allah Maswana to boycott the competition in Israel because Israel is an “apartheid state.” BDS organizations joined in the call. However, the Maswana has rejected the calls and announced that she will be in Eilat as planned. The organizers of the competition came out in her defense and said that they separate the competition from politics.

Herman designed a red dress for Spain’s beauty queen Sarah Levinaz drawing inspiration from flamenco dancing. The Israeli Embassy in Madrid hosted a reception for the designer and the beauty queen to which Spanish fashion designers, famous actors, and other senior figures in the Spanish fashion world were invited.